"Game of Thrones" post-finale: A little more pondering about "The Dragon and the Wolf"

The seventh season left us asking about a few things. Let's try to find some answers 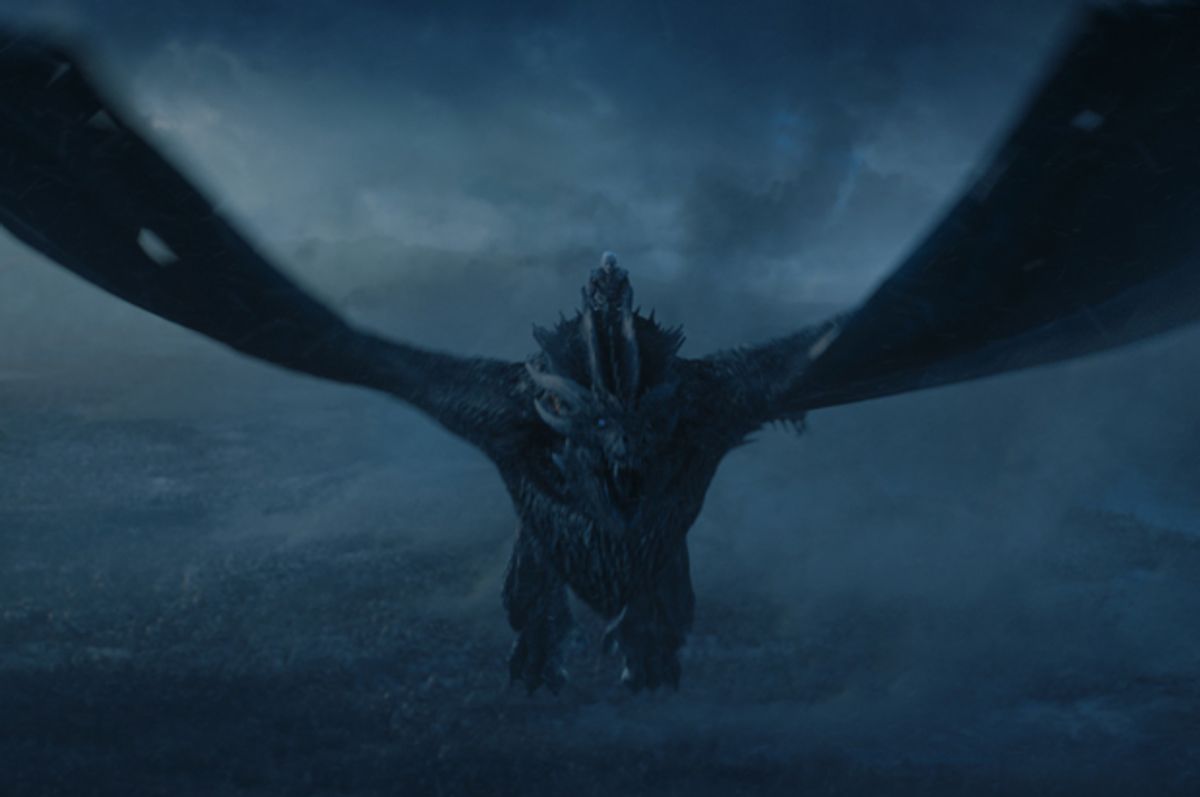 Vladimir Furdik as the Night King in Game of Thrones (HBO)
--

And now our watch has ended. For another year, anyway.

The seventh season of “Game of Thrones” was exciting, entertaining and exacerbating, often encompassing all of these reactions in the same episode. In the way of all great excursions, Sunday’s finale “The Dragon and The Wolf” flies by very quickly and gives rise to a number of questions that continue to hang in the air hours after the final credits roll.

Before we settle in for the figurative long winter’s nap between the seventh and eighth seasons of “Game of Thrones,” let’s endeavor to answer a few, make our best guesses about others, and take a moment to snicker at the icky joke of, “So . . . how’s your nephew?”

Thanks to the detective duo of Bran and Samwell Tarly, Winterfell’s version of “Simon & Simon,” the truth of Jon Snow’s parentage is no longer a secret, and that “R + L = J” theory has been confirmed. Handily Bran sends his brain back to the past to witness the secret marriage of Lyanna Stark and Rhaegar Targaryen and recalls that Lyanna whispers Jon’s birth name to Ned: Aegon Targaryen.

“He’s never been a bastard. He’s the heir to the Iron Throne. He needs to know,” Bran says in a voiceover. It’s true. Also, since he and Dany do A Dance with Dragons in her bed chamber, that news is bound to gross out the King in the North whose name is not Stark.

As for the significance of the name Aegon, Jon is now one in a line of eight starting with Aegon the Conqueror, the Targaryen who built the Iron Throne. In George R. R. Martin’s books Aegon Targaryen is secretly still alive, but like other characters it seems that his storyline has been absorbed into that of Jon Snow’s.

Rhaegar also had a son named Aegon with his first wife Elia Martell, and while it’s weird to have the same name as one’s brother, Rhaegar may have viewed his issue with Elia as his starter kids.

Besides, boxer George Foreman named all of his sons George and they’ve managed to work it out.

This is a question for which we have no definitive answer. Everybody’s favorite Wildling leader and the head of the Brotherhood Without Banners are part of the unfortunate team stationed at Eastwatch-By-the-Sea caught in the attack that takes down that section of The Wall. And while many, many Wildlings fall in that terrible tumble, Tormund and Beric dash across the top of the barrier instead of attempting the long sprint down. Our last glimpse of Tormund shows him watching a compatriot running behind him plummet as the Night King’s zombie dragon destroys their icy perch with a few sustained breaths.

But TV rules apply here: If we don’t see a body, we can’t be sure that anyone’s really dead. The larger question is how those two are going to descend from there. Like Beric says as the fateful scene opens, “It’s a long way down.”

From the moment the Night King drags Viserion’s body from that icy water beyond the Wall, viewers wondered whether he would become one of the ice dragons described in Old Nan’s tales to the children of Winterfell. Based upon the ease with which zombie Viserion’s blue breath slices through the wall, the undead dragon doesn’t spit cold. If real world physics apply here, Viserion’s blue flame may be comparable to that of oxyacetylene torches, which would make his fire far hotter than Drogon’s or Rhaegal’s. Its effect on The Wall hints at that possibility.

Or it could simply be a fantasy version of fire with capabilities that we’ll have to wait a year to discover.

What is The Golden Company?

Mercenary armies as much a part of the landscape in Essos as the grass sea. The skill and quality of each, however, varies.

In Martin’s “A Song of Ice and Fire” books, The Golden Company is a group of elite sellswords, most of them heralding from Westeros. It was founded by Aegor Rivers, a bastard son of King Aegon IV Targaryen, and their motto, “Our word is as good as gold,” refers to their guarantee that they never break a contract.

According to Cersei, the series’ version the army is comprised of “20,000 men, horses, elephants I believe,” all secured on behalf of the Lannisters by the Iron Bank.

These disciplined mercenaries differ from the Second Sons, currently holding the Bay of Dragons in Daenerys Targaryen’s name, in that the Sons are recruited from throughout the Free Cities of Essos. That army is comprised of men who are not the firstborn males in their families and stand to inherit nothing from their parents. So while the Second Sons may cross the Narrow Sea to support Dany’s cause, the Golden Company has a formidable reputation on par with the Dothraki and the Unsullied.

Will we see Littlefinger again?

Probably not. And, maybe.

Referring to the TV rule mentioned above, we see Littlefinger die by Arya’s expert wielding of the catspaw’s blade.  But remember that Arya has a list, and Cersei is right at its top. Since Cersei plans to betray Daenerys and the North, the time may come that Arya decides to kill the snake by chopping off the head. If that happens Littlefinger has a better chance of getting close to the Iron Throne than a Stark ever could. And we’re guessing that nobody present in Winterfell’s great hall will be in a hurry to broadcast Petyr Baelish’s death, since there are far more pressing issues to contend with.

Family ties notwithstanding, can Daenerys and Jon work out in the end?

Sure, why not? Everybody loves a romance, even one between a nephew and aunt. Author V.C. Andrews based a series of hit books on such a scenario, in fact. Anyway, incest is a family tradition among the Targaryens: Dany is the product of the union between Mad King Aerys II and his sister-wife Rhaella. So the nephew-aunt situation might not be seen as disgusting as, say, the union of a brother and sister. In Martin’s world anyway.

If it’s a matter of contending for rightful succession, Jon might not even want the Iron Throne.  He wasn’t exactly campaigning to be named King in the North, and it looks like Sansa has that handled. In that case it becomes a matter of pride — mostly Dany’s. As that sage named Lady Pat of House Benatar once observed, love is a battlefield.

We won’t know how that shakes out for a year at least, so why worry about it? Let’s savor the end of summer instead and try not to think about the fact that our Sunday nights are growing darker and, for the foreseeable future, destined to be “Throne”-less.