"Look What You Made Me Do" video: Taylor Swift battles herself and nobody wins 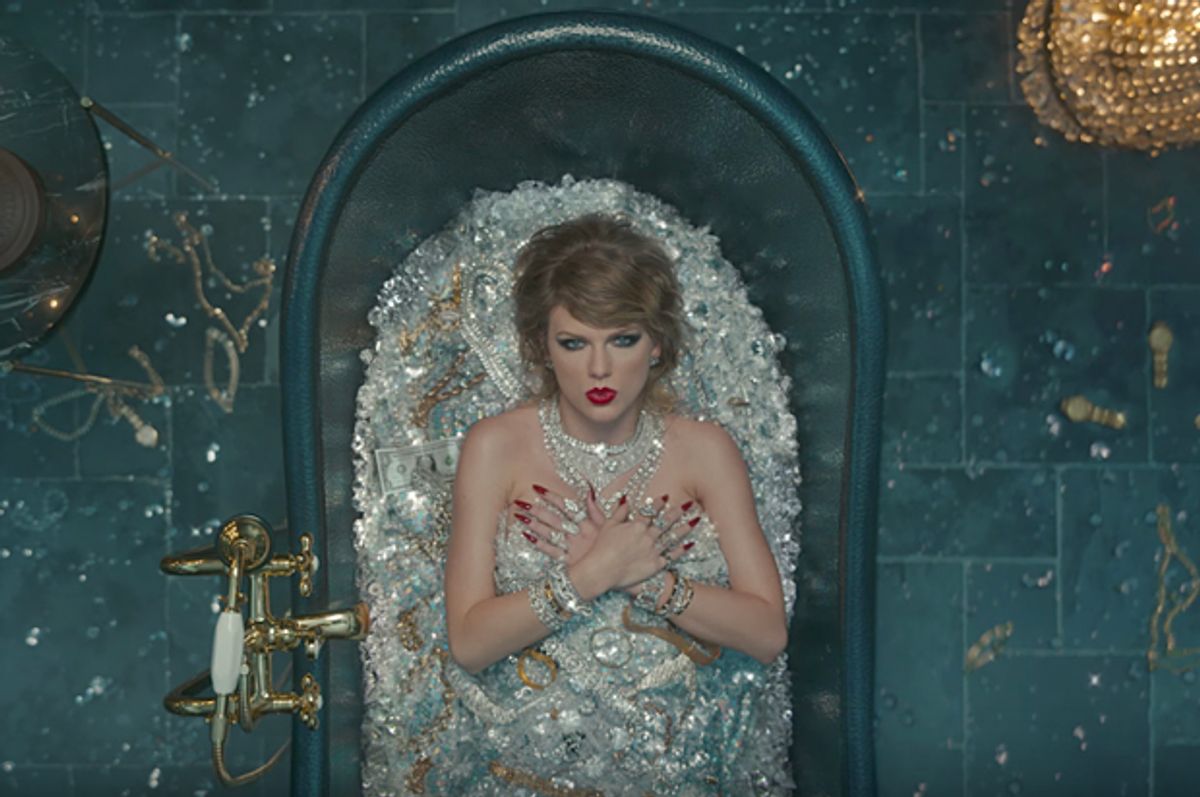 Look What You Made Me Do - Taylor Swift (Youtube/TaylorSwiftVEVO)
--

In her latest on-brand video, "Look What You Made Me Do," Taylor Swift emerges from her own grave, self-christened as the new Queen of Shade.

Prior to the release of the video and the announcement of her new album "Reputation," Swift had been in retreat from social media and the limelight. This vacation seems to have followed Kim Kardashian publicly exposing her for somewhat falsely playing the victim in her latest encounter with Kanye West. It was a moment that underlined Swift's much-discussed, career-spanning use of the victim card, one cataloged in a detailed, biting summary of pretty much every single thing that she's manipulated for public sympathy published on Buzzfeed.

In her hiatus, it appears Swift has collected receipts and addresses for all who she believes had wronged her — other celebrities, ex-boyfriends, critics and listeners alike — and packaged them into her new video. To wit, the opening visual is a tombstone that reads: "Here lies Taylor Swift's reputation," a clear nod to the takedowns she's been the center of in the past year.

There's so many visuals to decode here and many outlets who have, just as she wanted, have already spent the last 24 hours unpacking them. Shots are taken at every person she wants us to see as a personal nemesis that dared to get in her way: Calvin Harris, Kanye West, Katy Perry, the media, you.

In this, the ending of "Look What You Made Me Do" demands closer study. In it, 14 era-specific version of Swift confront each other, each dressed in a separate, well-known look from one of her various music-video and award-show appearances.

"Stop making that surprise face," a new Zombie White Walker version of Swift says to the t-shirt clad nerd from the "You Belong With Me" video. This is a reference to the fact that many have called Swift out for her endless "surprise faces" at award shows, reactions that appear rather disingenuous given that she almost always wins everything, deservedly or not.

"Yeah, you can’t possibly be that surprised all the time," says ballerina Taylor from the "Shake It Off" video. No-fucks-given Taylor chimes in: "what's with that bitch?" Zombie Taylor says: "Don't call me that!" in a gesture to Swift's behavior in the "Famous" beef, one in which Kanye West said he played the song for her, but the singer said she didn't know he was going to call her a bitch.

"Y'allll," young and full-on country Taylor scoffs. "Oh stop acting like you're so nice, you're so fake!" 2012 MTV EMA's Taylor scolds. Country Taylor starts to cry and one of the new Taylors says, "There she goes, playing the victim, again."

A snake hisses, a signal to the emoji Kardashian used to describe Swift last year. Then, Taylor in a long cheetah coat (in what may or may not be a Kardashian reference in style) starts snapping photos. When asked what she's doing, she answers, "Getting receipts, gonna edit this later." Kardashian exposed Swift with a snapchat video of West playing Swift the "Famous" song on the phone.

"I would very much like to be excluded from this narrative," Taylor dressed from the 2009 VMA's says (2009 was the year West interrupted Swift's acceptance speech and the phrase was the one she used after Kim Kardashian posted the video of the "Famous" conversation.)

"Shut up!" all the Taylors yell in unison.

It's effectively a roast of all the things that's been said about Swift over the years. At first glance, it feels reminiscent of the video for "Hotline Bling," in which Drake made fun of himself before anyone else could. Coming from Swift though, the same gambit feels more calculated and late to the party. Overall,  "Look What You Made Me Do" falls flat in terms of the ownership and self-awareness it seems to try to forward, particularly in light of last year's West/Kardashian drama.

In"Look What You Made Me Do," Swift attempts to become the villain we've all made her out to be, to own her reputation as a snake in the grass. As her album title and video suggest, her "reputation" as a goody-goody has been ruined and she doesn't give a fuck anymore. At least, that's what we're supposed to take away from this.

But both the video and the album title belie the notion that she's finally out of fucks to give. Indeed, it seems she's not letting any of the drama go. "Look What You Made Me Do" is really more about petty teen retribution and recrimination more than anything else. Why we might be tried of Swift, why so many people were on board for Kardashian's takedown of her, are never contemplated or studied. The only way in which Swift succeeds in adopting the look of a villain is her failure to take any accountability for or show any understanding of the many reasons why people might think she's a pretty, platinum-plated snake in the grass.

In counter distinction to what she did with her strong, truthful testimony in a lawsuit earlier this month and what she appears to want out of the video, Swift still plays the disingenuous victim blind to her own outsized privilege in "Look What You Made Me Do". It appears "Reputation" will just be another album crafted to extend and revel in that fairy tale.