Mayweather's win was only a win for Mayweather 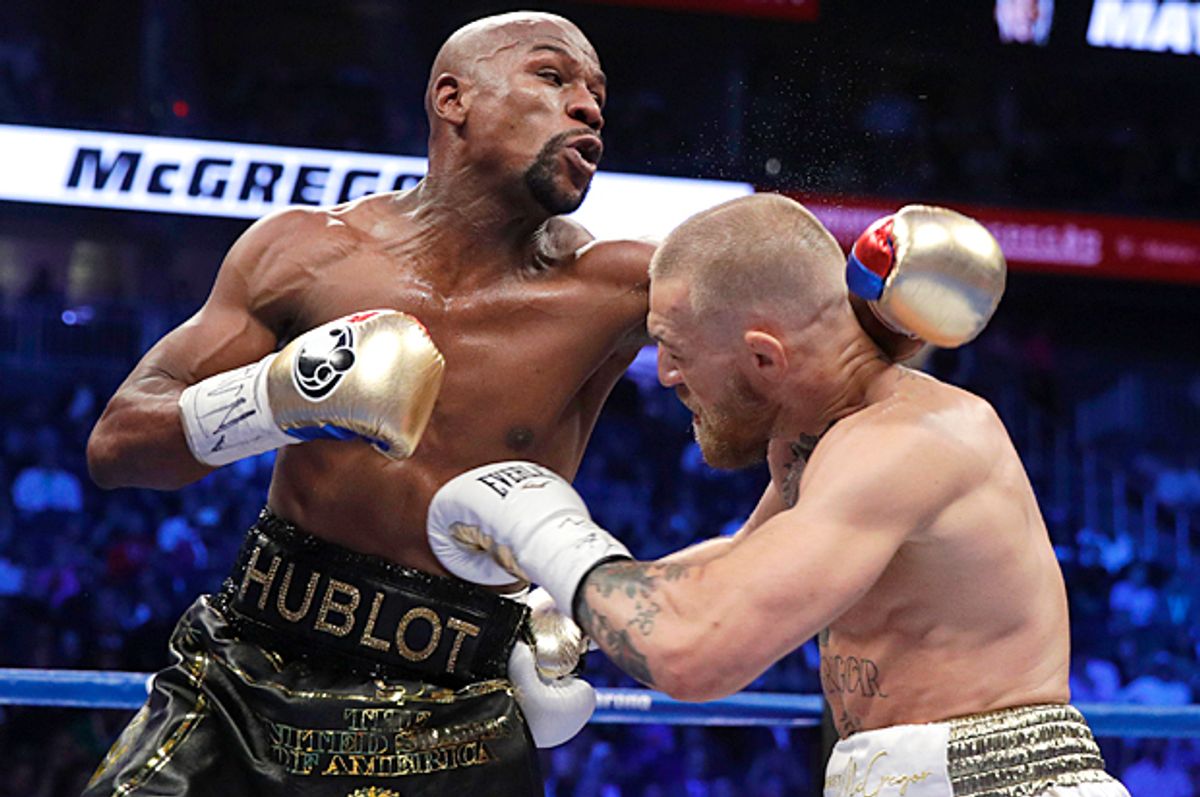 Of course the 12-1 boxing favorite Floyd Mayweather defeated UFC star Conor McGregor Saturday night. In my opinion they both won, thanks to that $400 million payout, with Mayweather taking the lion’s share — about $300 million.

The buildup of the fight was interesting, though, especially the framing of the bout as a black vs. white thing. While McGregor's pre-fight racist jokes, cast by his fans as mere "hype," caused no small amount of controversy, McGregor himself hasn't overtly branded himself as a champion of whiteness. But more tellingly, I've never heard Mayweather say anything meaningful in regards to black people. He actually told The Boxing Voice, “I’m here to say all lives matter. A lot of times we get stuck, and we are followers. You hear one person say, ‘Black lives matter’ or ‘blue lives matter’ . . . all lives matter . . .”

His statement clearly shows that he has no understanding of the current police culture or political movements, let alone what's going on in the streets, so how did an out-of-touch “All Lives Matter” guy become the voice for all of us?  Are we that pressed for a win?

Mayweather wasn’t fighting for the people, nor should we have expected him to be. He was fighting for that $300 million. Memes popped up on social media after his victory, though, like the one depicting him as an African king and McGregor a defeated Klansmen.

Who comes up with this stuff?

They need to stop. Poor representation like this is only going to make social relations in this country worse. Mayweather doesn’t speak for me and McGregor isn’t an abusive cop, but these silly factless memes can influence how people think.

Think about some white guy who gets really upset at the outcome of the fight — probably more upset than he should be, since these celebs aren't thinking about us — and then maybe does something really stupid.

Chip is overwhelmed with anger and hate — so much hate that he creates a Facebook group to connect with other people who feel the same. They all feel equally let down by McGregor's loss. In a twisted act of resistance, Chip and the boys put on khaki pants, tuck in their white polo shirts, grab their Make America Great Again hats and hit every Home Depot to buy all of the Tiki torches so that they can organize a rally around how much they hate black Americans or Jewish people or the LGBTQ community or women, or all of those groups combined. (I think the demographic to which they direct the most hate changes depending on what day of the week it is.)

Then they’ll march a pointless march while chanting pointless chants, and of course we all lose: Their rally will be a total waste of time because minorities aren't going anywhere, and I won’t be able to create an island vibe at my end-of-summer cookout because all of the Tiki torches will be sold out for the season.

So please, people of the internet, I beg of you­­: stop with the false prophets and fake heroes.