On the red carpet, in speeches and in performances, MTV used its platform to denounce racism and hate 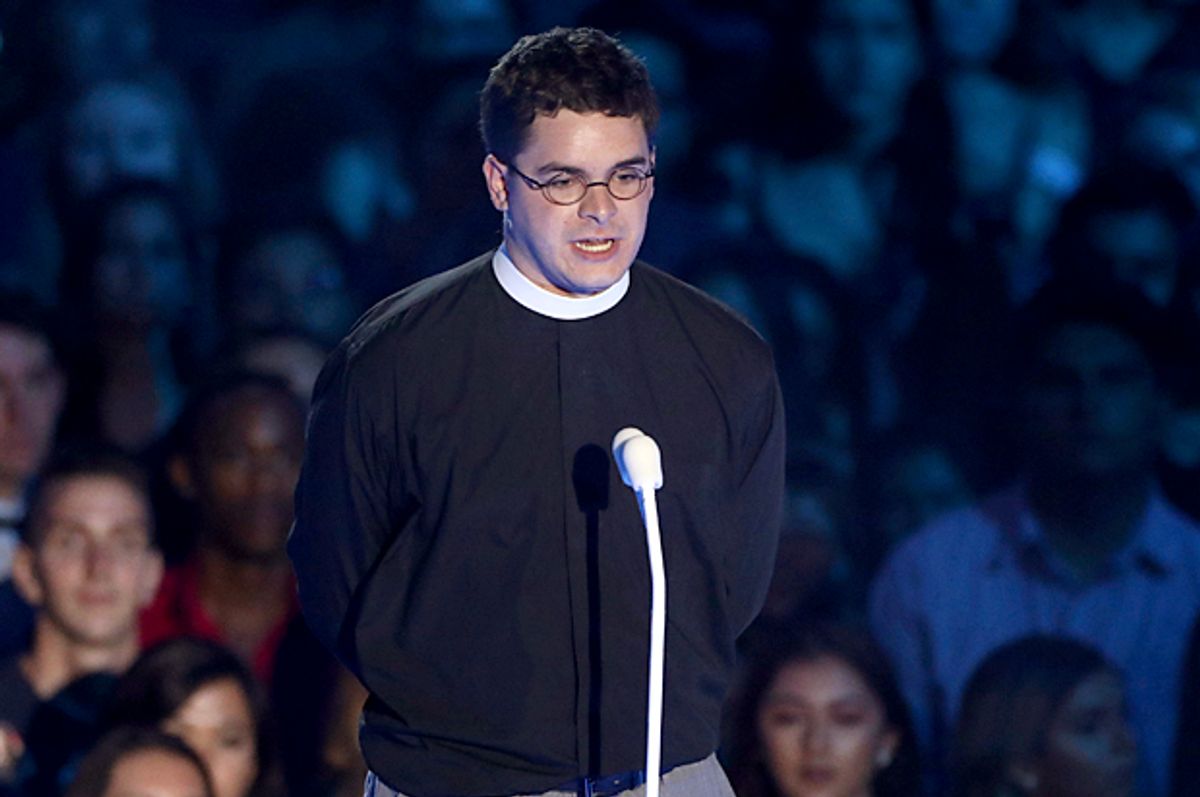 Perhaps more than ever, popular culture has become an arena for many artists to address the social unrest and the purveying and unrelenting effects of systematic racism and discrimination in this country. Last night's MTV Video Music Awards was no different.

Throughout the night, there were multiple notable displays that amplified often marginalized voices — moments and celebrities that showed support with those who live under threat of President Donald Trump's administration.

Rev. Robert Wright Lee IV, a many-generations-removed nephew of Robert E. Lee, took the stage to introduce Susan Bro, the mother of Heather Heyer, the woman who was killed while protesting white supremacy in Charlottesville. Lee IV has also been vocal about the need to remove Robert E. Lee's statue, as well as all other confederate memorials across the country.

"We have made my ancestor an idol of white supremacy, racism and hate. As a pastor, it is my moral duty to speak out against racism, America's original sin," Lee IV said. Loud applause encouraged him to continue. He called on those with privilege and power "to confront racism and white supremacy head on."

"We can find inspiration in the Black Lives Matter movement, the women who marched in the Women’s March in January, and especially Heather Heyer, who died fighting for her beliefs in Charlottesville," he said.

Following that, Bro announced the launch of the Heather Heyer foundation, a nonprofit dedicated to providing resources for folks to "join Heather's fight against hatred." Bro also drove home another message: Heather Heyer never fought alone. In that spirit, MTV honored all six nominees of the "Best Fight Against the System Award."

Before the show even began, the support for the resistance was apparent. GLAAD's president Sarah Kate Ellis walked the red carpet with six trans military people — this just a couple of days after it was announced that President Donald Trump would send guidance to the Pentagon to move forward with banning trans people from serving in the military.

"Historically, the VMAs have been a huge platform for social issues that are currently happening, so being able to have that platform and share our stories is important to us," Army veteran Laila Ireland told Billboard.

Rising star and rapper Cardi B took a moment to acknowledge the bravery and protest efforts of Colin Kaepernick before her performance at the VMA's pre-show ceremony. "Colin Kaepernick, as long as you kneel with us, we gonna be standing for you baby," she told the crowd.

Paris Jackson, daughter of Michael Jackson, was the presenter for best pop nominees, but she too had a message for the audience and viewers. She began by commenting on the impact and potential power if "we were to stand up united as one . . . and that's not fake news," she said.

"Let's leave here tonight," Jackson continued, "remembering that we must show these Nazi, white supremacist jerks in Charlottesville and all over the country that as a nation with liberty as our slogan, we have zero tolerance for their violence, their hatred, and their discrimination! We must resist!"

Alessia Cara performed her body-positivity song "Scars to Your Beautiful." Her background dancers stripped Cara down to her natural state, removing her wig, gown and makeup until she was left wearing a simple black shirt and pants. As she told Glamour last year: "I am not going to be wearing any makeup, because how could I be preaching a song about being yourself and being beautiful and perfect the way you are — and have a full face of makeup? I want to show people that I am comfortable enough to go on national television and just be myself. It would only feel right if I am 100 percent me."

On a more personal level of resistance, Pink, who won the Video Vanguard Award, shared a story of a recent exchange with her daughter, who told Pink that she felt she was the ugliest girl she knew, "I look like a boy with long hair," she told her mom. Pink said she made a PowerPoint presentation filled with "androgynous rock stars and artists that live their truth, are probably made fun of every day of their lives, and carry on, and wave their flag, and inspire the rest of us.”

Pink told her daughter, "They say that I look like a boy, or I am too masculine, too many opinions, my body is too strong," but that she isn't growing her hair or changing her body because of it, and she continues to sell out arenas all over the world. "So, baby, girl," she said, "we don’t change. We take the gravel and the shell and we make a pearl. We help other people to change so they can see more kinds of beauty."