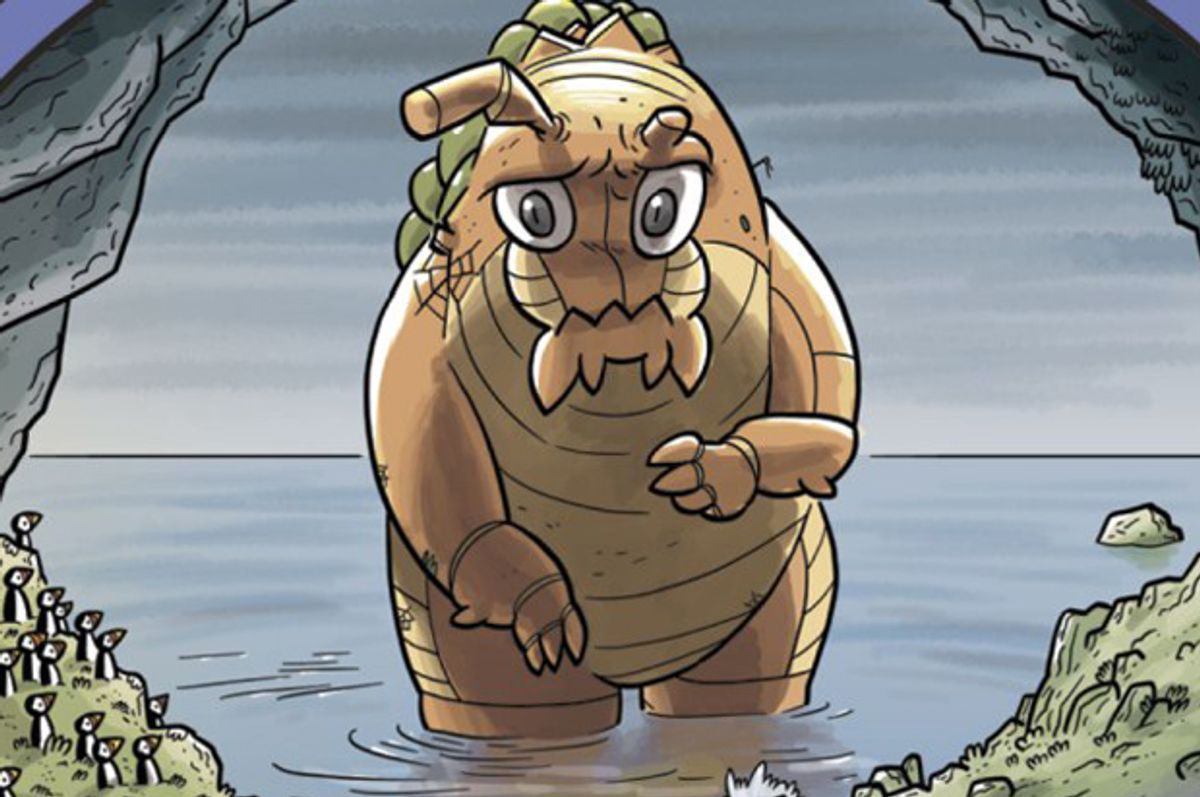 Even the most bleeding-heart liberal love muffins in the world usually don’t have a lot of time or energy for prisoners. If a male comedian tells a rape joke about women, they’re lambasted — as they should be — but everyone has a free pass to joke about prison rape. Despite a smorgasbord of studies showing the horrors of solitary confinement and prison life in general, few care about humane treatment of prisoners. There are so many atrocities in the world, that prisoner welfare just doesn’t make the sympathy list for most folks. We’re all complicit in the dehumanization of convicts.

Well, not all of us. Writer and artist Zander Cannon gets a pass because of his tremendous series “Kaijumax,” now in the middle of its third arc for Oni Press. Despite or perhaps because of its absurd premise — giant Japanese-style monsters on an island prison — “Kaijumax” does more to humanize real-life convicts than any recent piece of popular culture. Improbably, this absurd series is one of the most socially relevant and psychologically rich comics on the shelf.

Cannon’s inspiration for the series was Ultraman: a bonkers Japanese TV show from the 1960s in which the titular hero fought a different massive beast each week. Cannon took this insane series in a logical direction: What would society do with the likes of Megalon and Mothra? Cannon’s answer was a twist on the idea of a monster island, which he transformed into a gargantuan version of HBO’s Oz: a prison that’s a little like Gotham’s Arkham Asylum but with Godzilla instead of the Joker.

The series — which Cannon writes, illustrates, colors and letters — began in 2015 and is currently in the third “season” of a six-season arc. “Kaijumax,” at first glance, looks very much like a children’s comic with bright colors and inventive monster designs. In fact, Cannon said in an interview with Salon, the comic often is placed in the children’s section of comic-book stores — but, man, that’s a mistake as big as Cannon’s characters. This series is adult squared, not just for content, but for depth and complexity.

Cannon has created an ensemble series where just about every character, monster or human, prisoner or prison doctor, is given layers and purpose. The closest to a lead is Electrogor, a plutonium-spawning monster whose facial expressions and body language are the saddest since Charlie Brown. Electrogor has reason to be upset, since he wasn’t captured for any crime, but just for being a giant monster. The poor big guy was apprehended while gathering food for his children, who are now on their own, presumably hungry and also vulnerable in a world full of monster-hunting police and non-parental monsters. Meanwhile, Electrogor is stuck in Kaijumax, where corrupt guards, warring gangs and available drugs all conspire to break his spirit.

One of the most harrowing events in the series involves a monster-on-monster rape. This violation, which is taken seriously in all its horror and consequences, is one of the first signs that “Kaijumax” has more to offer than great art and a wacky premise. Cannon said in an interview with Salon, “I couldn’t back off and make it light” — the rape needed to be treated with “gruesome seriousness.” Cannon understands where people are coming from when dismissing prison rape, but he sees the flaws in that mindset: “You think, oh, it’s happening to that murderer, or that drug dealer . . . but some prosecutor who’s just trying to put away every black pot dealer, you end up with a whole different situation.” Kaijumax is the epitome of “a whole different situation,” and by shifting a real-life atrocity into an unreal world, it makes that next prison rape joke harder to hear or tell.

The second issue of the second arc is a high point, depicting a frighteningly true-to-life example of police brutality and a cover that elevates the racial subtext into text. On that cover, a kaiju carries a lunchbox, making his way to his crappy job, which is the best available for an ex-con (or “ex-mon” as wordplay-happy Cannon puts it). This stereotypical monster, towering over buildings, is usually seen smashing them, and you can see why he’d want to from signs displayed throughout the city: “NO KAIJU PERMITTED,” "KAIJU ENTRANCE IN BACK,” “WE SERVE HUMANS ONLY” and “NOW HIRING HUMANS ONLY.” A restaurant sign proclaims “WE SERVE KAIJU TAKEOUT ONLY.” Of course, from a logistical standpoint, cramming a massive monster into a restaurant would be impossible, but Cannon spins pure absurdity into strong commentary.

But never fear, this series is far from preachy or pretentious. Other examples of prison life are played more humorously, though not disrespectfully. For example: the rectal search. Comic books have delved into the multiverse, the Negative Zone, the Phantom Zone and the microverse, but until now they’ve never gone inside the pooper of a Godzilla type. The necessity of such an exam is pretty clear: a kaiju could have a whole armory smuggled up the wazoo. This is another example of Cannon following his premise to its logical extremes, logistically or psychologically.

That balance — which Cannon describes as “half silly, half tragic,” is what makes the series work. Cannon originally intended to stay more on the silly side of things, but admitted, “I’m not able to do that. I think of myself as being a pretty sunshine-y person, but all my stories tend to get a bit melancholy.” That melancholy elevates this series to the level of heartrending drama. Cannon strikes a balance between out-sized insanity and psychological depth by focusing on character and the fallout of “what being unwanted, being shunned, does to an individual.” Cannon said he’s mostly interested in portraying the psychological fallout of issues such as racism and police brutality: the depression, drug addiction and PTSD. Cannon’s commitment to the psychological reality of his unreal world makes this series hit hard, and the cartoony visuals make it go down smooth.

“Kaijumax” could have been an enjoyable guilty pleasure — like other creator-owned titles with insane premises such as “Grizzly Shark” or “Shirtless Bear-Fighter” — but those series can’t be compared to “Oz” and “The Wire.” Kaijumax can. Cannon’s unreal world of lizzas (monsters) and squishers (humans) is a carnival mirror reflecting our world. This comic is a unique and humane triumph.