Arpaio pardon may be opening act of a constitutional crisis 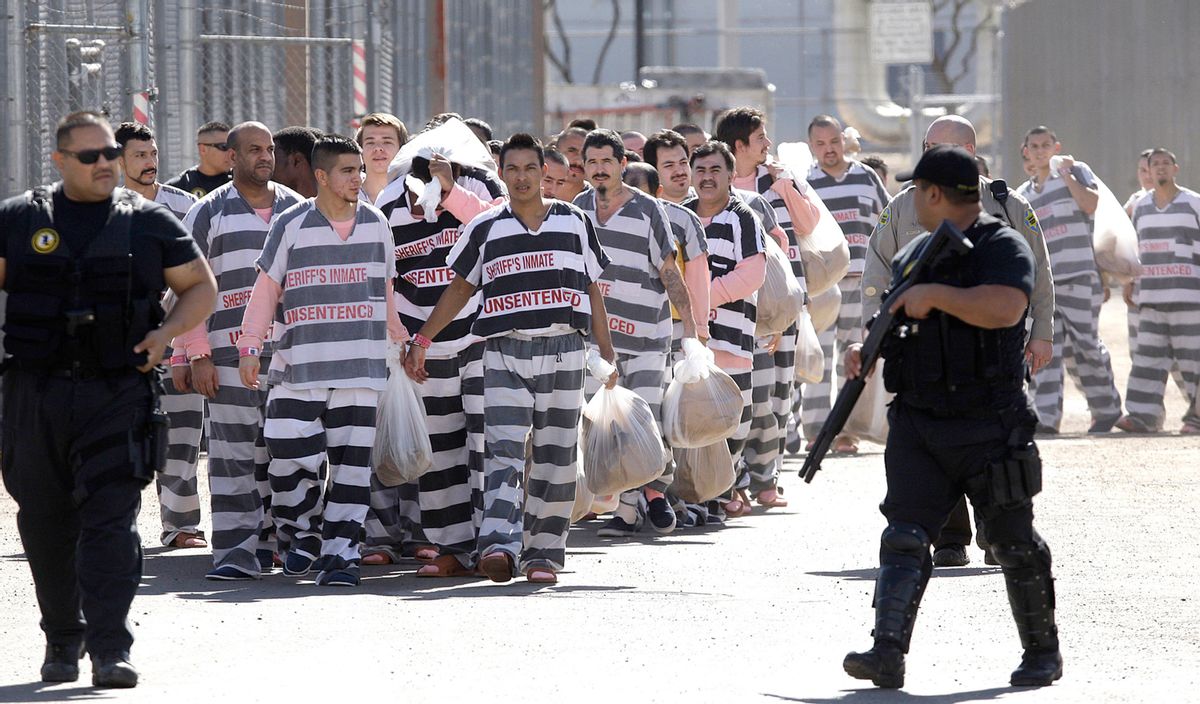 FILE - In this Feb. 4, 2009, file photo, approximately 200 convicted illegal immigrants are handcuffed together and moved into a separate area of Tent City, by order of Maricopa County Sheriff Joe Arpaio, for incarceration until their sentences are served and they are deported to their home countries, in Phoenix. Paul Penzone who defeated Arpaio in the November election announced Friday, Feb. 17, 2017 that he is ending a policy that keeps immigrants locked up in his jails past their release date to give federal authorities extra time to launch deportation proceedings. (AP Photo/Ross D. Franklin, File) (AP Photo/Ross D. Franklin, File)
--

This morning, I received an email from an old friend — one of the country’s top trial lawyers: “I have underestimated Trump. He knows what is coming, including a variety of criminal charges and other impeachable offenses. He is not just arousing his base to anger but to arms, some of them. There is no other way to explain the transgender ban, the Arpaio pardon, his Charlottesville remarks…

“I would think he will pardon himself, family members, Michael Flynn and Paul Manafort, among others, and if he is angry enough, Mrs. O’Leary, who, you must admit, got kind of a raw deal.” (Note: Myth has it that one Kate O’Leary’s cow kicked over a lantern in the barn and started the Great Chicago Fire of 1871. She was widely blamed but never charged.)

And the following came from the journalist and author Charles Kaiser. His books include Gay Metropolis, 1968 in America, and The Cost of Courage, a riveting account of one family that joined the French resistance against the Nazi occupation.

Trump started tweeting trial balloons about this a month ago — “all agree the US president has the complete power to pardon” — and he has even asserted the unlitigated idea that he can pardon himself. But what he did yesterday puts his presidency on a whole new plane: a Category 5 political hurricane. By pardoning a man convicted of criminal contempt for direct violation of a federal order, Trump is now flaunting his eagerness to overturn the rule of law in America.

While all agree the U. S. President has the complete power to pardon, why think of that when only crime so far is LEAKS against us.FAKE NEWS

I have never seen anyone who has acted more obviously guilty than Donald Trump has almost every single day since he became president. From his tête-à-tête with James Comey, in which he asked the FBI director to end his investigation of Michael Flynn, to his firing of the same man when he failed to heed that warning, to his newly reported phone call to Senator Thom Tillis R-N.C. to complain about a bill that would protect special counsel Robert Mueller’s independence, the president has engaged in one blatant attempt to obstruct justice after another.

Here is the most logical way to view his pardon of Sheriff Arpaio: It is the latest and gravest step he has taken in his continuing efforts to undermine the rule of law. Obviously Trump delighted in fueling the racism of Arpaio’s supporters by pardoning this convicted criminal — he made that clear earlier this week during his repellent speech in Phoenix. But I am certain that is not the main reason for this heinous act.

For many weeks, Washington has been swirling with rumors that Mueller already has secured the cooperation of Michael Flynn and Paul Manafort in his investigation of the president. And Trump undoubtedly is more vulnerable to the testimony of these two men than he is to that of any other players in this fearful drama. Therefore, Trump must feel compelled to send this message through Arpaio’s pardon: The president is eager and willing to do the same thing for anyone who might be pressured into testifying against him.

I have written a book about France under fascism, and what we are now experiencing is exactly what incipient fascism looks like. The combination of Trump’s relentless assaults on the free press, his open encouragement of Nazis — which is the only honest description of his initial refusal to condemn them — and now a pardon without even pretending to go through the normal channels of the Justice Department: These are all the acts of man who is blatantly defying his sacred pledge to uphold the Constitution of the United States.

Like the men and women of Vichy France who began their collaboration with the Nazis 77 years ago, from now on, every senator and House member of either party who continues to remain silent about this president’s unconstitutional acts is directly complicit in the high crimes and misdemeanors of Donald Trump.

I know very serious students of American justice who already were convinced last night that the pardon of Arpaio has fatally undermined Robert Mueller’s investigation by killing the incentive for anyone to testify against this president. Personally, I am not yet that pessimistic. I still believe that any pardon of Flynn or Manafort or Jared Kushner will produce a large enough firestorm to end Donald Trump’s presidency, either through impeachment or the 25th Amendment to the Constitution, which would allow for his removal by a majority vote of his cabinet.

But if there is a majority of Republican senators and House members who wish to avoid a full-blown constitutional crisis worse than anything we have seen since the secession of the Confederate states, they must speak loudly and act clearly right now. They must immediately pass the bill introduced by Democratic Senator Chris Coons of Delaware and Republican Senator Tillis of North Carolina that would shore up the independence of the special prosecutor, and they must pass it with veto-proof majorities.

Senator Lindsay Graham already has said that the firing of Attorney General Jeff Sessions would mean the beginning of the end of Trump’s presidency. It is long past time for all of Graham’s colleagues in both houses to declare that the same thing will be true if the president dares to repeat the horrific abuse of his pardon power that we witnessed last night. Otherwise, America is destined for an era of violence and darkness unlike any we have ever witnessed since the end of the Civil War, 152 years ago.

Charles Kaiser, a senior fellow in the National Arts Journalism Program at Columbia University, is the author of "1968 In America" and "The Gay Metropolis."