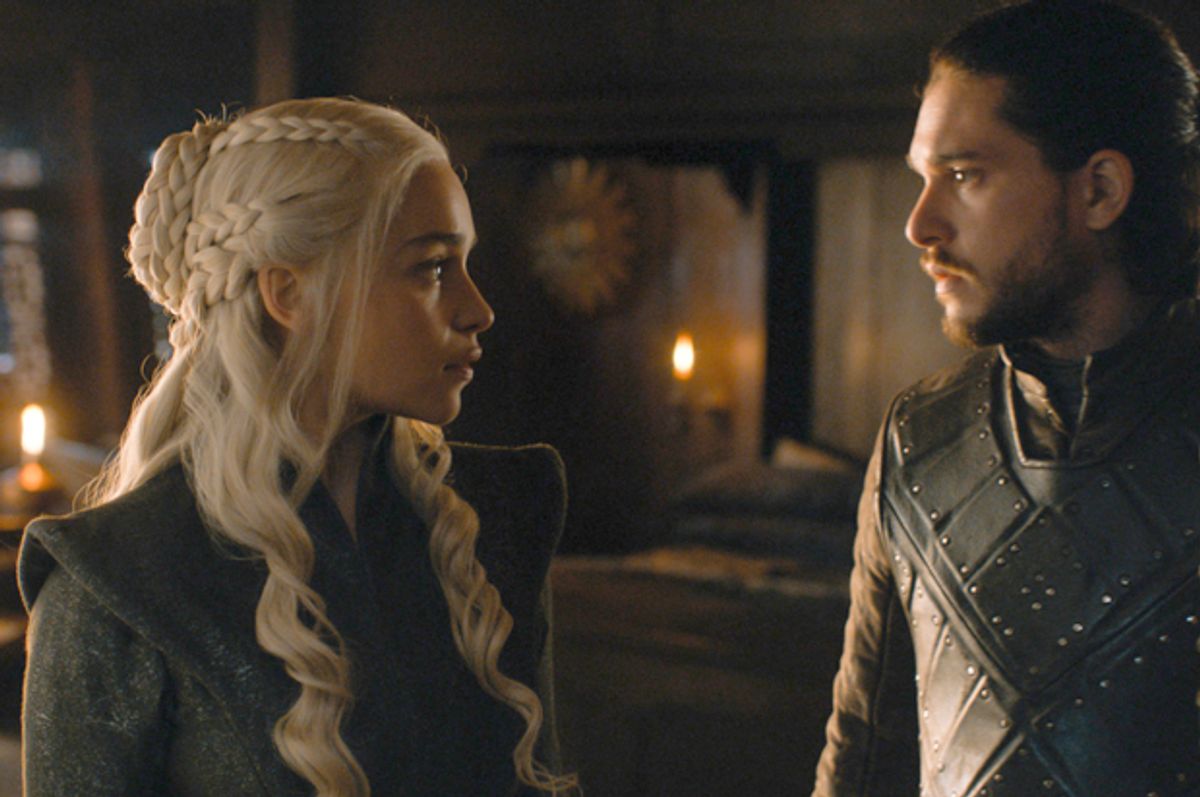 Emilia Clarke and Kit Harington in "Game of Thrones" (HBO)
--

Warning: If you don't want to see spoilers for the season 7  finale of "Game of Thrones," run — run like the wind.

It was beautiful, well-lit, romantic, slow and long in the works. And, yet, the sex scene between Jon Snow (Kit Harington) and Daenerys Targaryen (Emilia Clarke) that was the — ahem — climax of the season 7 finale of "Game of Thrones," "The Dragon and the Wolf" was, at its core, gross.

And that's not a knock on the butts of either Harington or Clarke (both are blessed in that respect). No, as fans of the series know, not only is Clarke's character secretly the aunt of Harington's, but showrunners D.B. Weiss and David Benioff saw fit to confirm their familial relationship once and for all at the exact moment the two were in the act of love. Whether you join the prudish majority in having a hangup here or embrace a more inclusive attitude toward aunt-nephew relations, you have to admit that some out there might find the whole business worth a gag or two.

Two who have unquestionably gagged are Harington and Clarke themselves. As you can see for yourself in this behind-the-scenes video supplied by HBO, they were both feeling the ick.

As Clarke says "For us, as actors, it's just weird. The reality of what they are to each other, I don't know how that's going to . . . I mean, I think kind of [comical gagging sounds] might be the reaction." Highly perceptive.

Harington also held forth, saying, "I like looking at her and going [quiet comic gagging] 'oh God, I'm sorry.'" This is totally fair.

Throughout the short, actors including Isaac Hempstead Wright (Bran Stark) and Peter Dinklage (Tyrion Lannister) also dance around the delicate subject, nodding to its possibly deadly repercussions and its inherent nastiness. As Dinklage says "It’s just . . . no. It’s not good. It should be, but it’s not. It’s 'Game of Thrones'. There’s a long history of romance not ending well on this show."

When asked by Entertainment Weekly how her character would react to finding out she slept with her nephew, Clarke added "Ewwwww!" She continued "I think that's how it's going to go. I get the toothbrush." Entertainment Weekly noted that the actor "pretended to frantically brush her tongue."