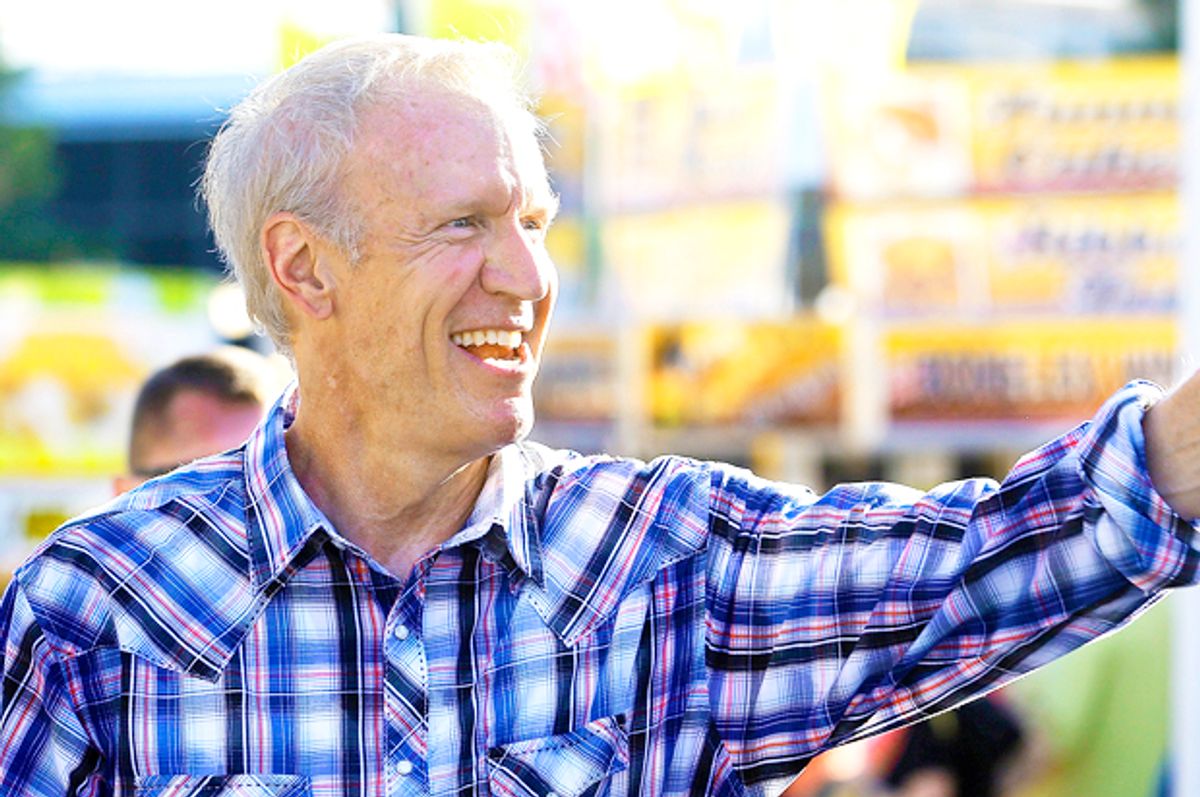 One of just five blue-state Republican governors, and the first Republican governor of Illinois in more than a decade, Bruce Rauner finds himself in a precarious political situation. A billionaire with no previous political experience, Rauner might sound at first like a tailor-made perfect political ally for President Donald Trump. Instead, Rauner has managed to avoid even uttering Trump’s name for months -- finally breaking his silence following the president’s disdainful response to racist violence in Charlottesville. Now Rauner is moving beyond pushing back on Trump’s rhetoric. He has signed several pieces of legislation that stand in direct contradiction to Trump’s agenda. In so doing, at least arguably, he provides a road map for fellow Republicans desperate to ditch a sinking ship.

At Mi Tierra restaurant in Chicago on Monday, Rauner signed into law a controversial bill that bans local law enforcement from stopping, arresting, searching or detaining anyone based solely on immigration status. Hours later, Trump was defending his controversial pre-sentencing pardon of former Arizona sheriff Joe Arpaio, found guilty of contempt of court by a federal judge after he failed to end racial profiling of people suspecting of being undocumented immigrants.

“Illinois has been welcoming of immigrants for a long time, and this bill will continue that tradition,” Rauner said in a statement Monday. His bold move to protect Illinois’ undocumented immigrants comes just weeks after Chicago Mayor Rahm Emanuel filed a lawsuit against the Trump administration for vowing to block federal grants to cities that do not cooperate with federal immigration agents.

Rauner signed another bill on Monday that is fundamentally at odds with the aims of the Trump administration. After recently vetoing a previous version, Rauner signed one of the farthest-reaching voter access laws in the country.

Calling for concrete action in the wake of the president's feeble response to the white supremacist violence in Charlottesville, Democratic Minority Leader Chuck Schumer called on Trump to disband the voter fraud panel he assembled after losing the popular vote to Hillary Clinton. “This is how the appalling failure to use the right words and stand up to hate in the aftermath of Charlottesville is made real in the form of policy,” Schumer argued, calling Trump’s Election Integrity Commission “a ruse” whose “only intention is to disenfranchise voters.”

If the president fails to act, Schumer added, Republicans must stand up to him. By signing a bill to make automatic voter registration possible in Illinois, Rauner in effect became the first Republican to take up that challenge.

Overwhelmingly approved by the state legislature, where it passed unanimously in the House and with a veto-proof majority in the Senate, the new law will have a dramatic effect on Illinois elections by adding roughly one million new eligible voters to the voter rolls. The law provides for eligible voters to be automatically registered when they apply for, update or renew a driver's license or state ID. Illinois will be the first Midwestern state to enact automatic voter registration when the law goes into effect in 2018.

Hours before Trump delivered his directives to dismiss all transgender service members from the U.S. military on Friday, Rauner signed a bill that would make it easier for transgender people to change the sex designation on their birth certificates.

Rauner’s approach probably can't be understood as a rebuke of Trump rooted in moral principle. More likely it reflects his efforts to walk the line between his conservative base in downstate Illinois and the more moderate Chicagoland constituencies he will need in order to win reelection in 2018. But Rauner still offers Republican lawmakers a pathway out of the mess in which Donald Trump has left their party.

Republicans in blue states are, of course, highly vulnerable to Trump backlash. If unenthused Republicans stay home and angry Democrats come out in larger than expected numbers in 2018, it could spell nationwide disaster for the GOP. While Trump continues to play to the hardcore base with his policies and rhetoric, Rauner's turn toward moderation may provide Republicans with a workable alternative model -- at least for now.