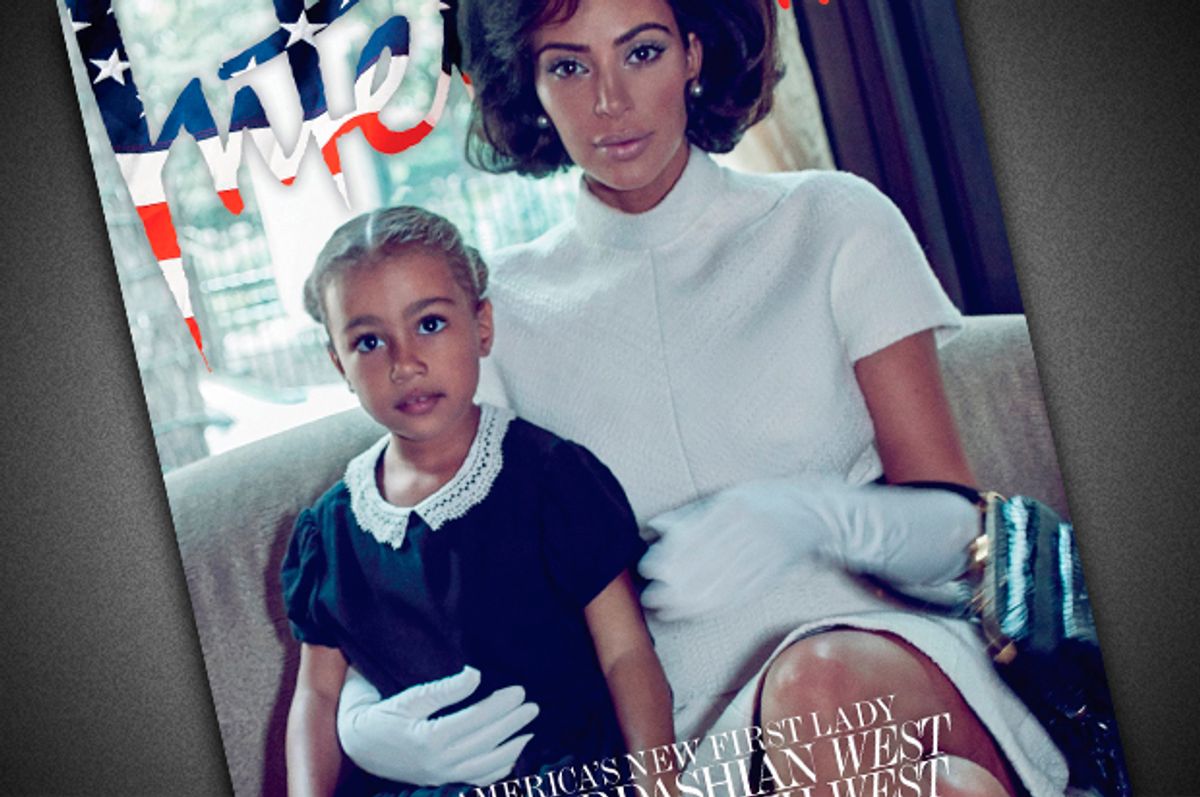 Kim Kardashian West and daughter North West posed for the September cover of Interview magazine styled after, as the publication says, "another mother whose every move captivated the American imagination: first lady Jacqueline Kennedy Onnasis."

Many on Twitter found the comparison between the two popular women far-fetched and insulting (which is typical for most things Kardashian West is involved in).

In the perhaps-engineered tumult surrounding photographer Steven Klein's images, trans-activist and writer, Janet Mock, who actually wrote the interview for the cover story, has found herself in the crosshairs of many.

Indeed, some were surprised that Mock agreed to author this piece at all. Others have found her questions and writing suspect as well. Certainly there were problematic moments, like the bizarre statement where Mock said to Kardashian West "You are a beauty icon, because you’ve challenged standards of beauty to make it a bit browner, a bit bronzer, a bit curvier." Kim Kardashian West, as tan as she may be, is a white woman.

This is an area of complexity and controversy that has, and quite rightly, dogged Kardashian West for some time. Brande Victorian from Madame Noire wrote that Kardashian West has "adopted physical characteristics typical of Black and brown women and they became accepted because they were attached to a white face."

But as Kardashian West went on to talk about raising a bi-racial daughter, her answers were further complicated by the fact that just a couple weeks ago, she defended known-racist makeup vlogger Jeffree Star.

It's all quite a lot and a number of people citied it as a failure on Mock's part.

Following those comments Mock took to Twitter to defend the interview:

Mock continued to tweet: "KKW & I spoke in July on the phone; I was interested in how she navigated controversy/business & surrounded her black children w/ images."

Mock also made clear that their conversation took place prior to Kardashian West defending Star and in her words, "I should NOT have said BROWNER but BRONZIER." And for those criticizing Mock's line of questioning, she did ask Kardashian West some critical questions about her consciousness and how race and identity are taught and addressed in her home. It's a question I'm not sure West has answered before and is especially significant coming from a black woman such as Mock.

So, not only did Mock address the two controversial components that surrounded the interview — the browner statement and the Star controversy — but she brings up an important point about the way journalism works.

Most writers don't choose their own headlines. Angles, too, are often assigned. Artwork, such as Klein's takeworthy photographs, is the responsibility of an entirely different department.

Of course, it gets sticky because as writers, it's our bylines that are attached to the stories you read, even if we don't stand by the edits, headlines or images that surround them. In making clear her role, intentions and accountability with the interview, Mock pulled back the curtain on all of this just a little bit.

So, next time you see a headline or image you don't like, it'd be really nice if you all just stopped yelling at us writers for it. That wasn't us.