Paul Krugman: America has begun its slide into fascism 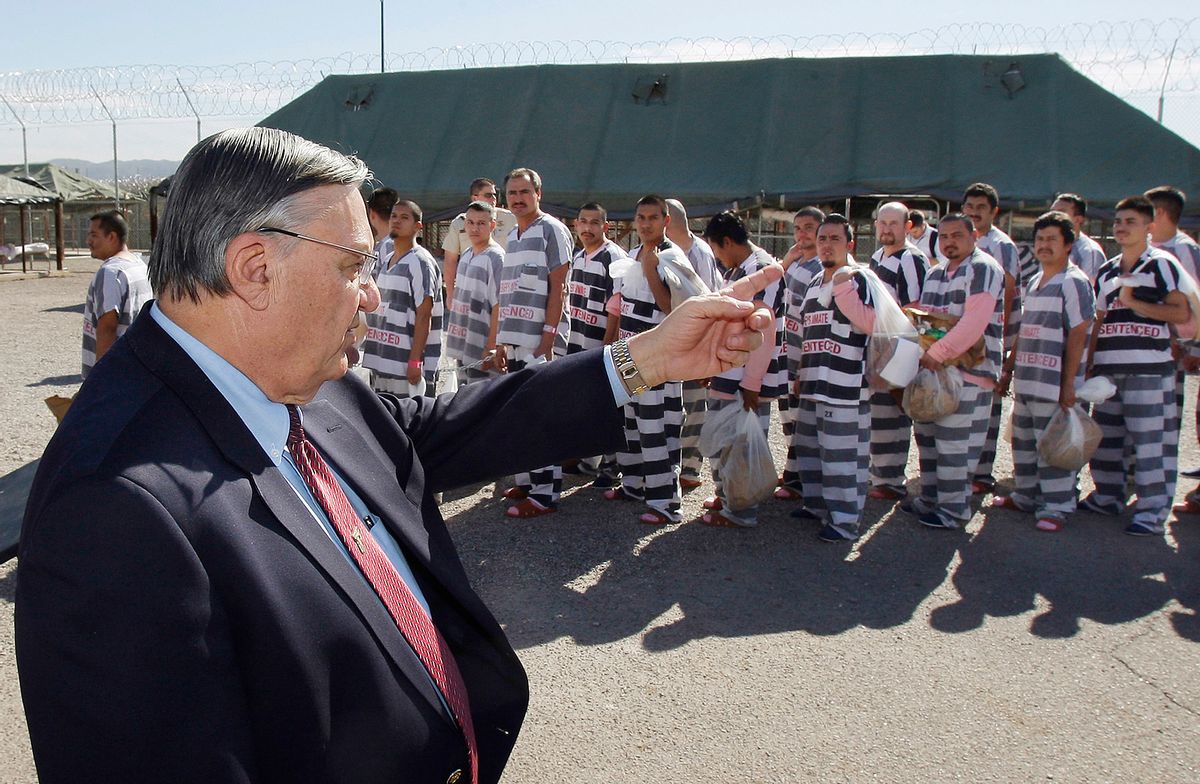 FILE - In this Feb. 4, 2009, file photo, Maricopa County Sheriff Joe Arpaio, left, orders approximately 200 convicted illegal immigrants handcuffed together and moved into a separate area of Tent City, for incarceration until their sentences are served and they are deported to their home countries, in Phoenix. (AP Photo/Ross D. Franklin, File)
--

Former Maricopa County Sheriff Joe Arpaio proudly referred to his tent city prison as a "concentration camp."  For decades, the former sheriff freely carried out his abuse and racial profiling, ignoring any requests to stop, Arpaio was finally convicted for contempt of court earlier this summer, but the conviction lasted barely three weeks before Donald Trump pardoned him, paving the way for what Paul Krugman calls "fascism, American style."

"There’s a word for political regimes that round up members of minority groups and send them to concentration camps, while rejecting the rule of law," he wrote in his Monday column. "What Arpaio brought to Maricopa, and what the president of the United States has just endorsed."

It's not hard to understand why Trump would be eager to pardon Arpaio. The president fawns over dictators like Duterte and Putin, and accuses immigrants of being rapists. Of course he'd love the idea of a strongman flourishing in an American county. In addition, Krugman pointed out, "the pardon is a signal to those who might be tempted to make deals with the special investigator as the Russia probe closes in on the White House: Don’t worry, I’ll protect you."

His base also revels in spectacular feats of racism, and with his approval rating plummeting, Trump needs them more than ever.

What's less immediately clear is how we got here in the first place. Why was Arpaio allowed to openly engage in abuse and racial profiling? Why did we allow a failed businessman-turned-reality television star to become president? For Krugman, the blame lies with their collaborators. What made Trump's rise possible, he explained, is "the acquiescence of people, both voters and politicians, who aren’t white supremacists, who sort-of kind-of believe in the rule of law, but are willing to go along with racists and lawbreakers if it seems to serve their interests."

Their representatives in Congress have done little more than issue verbal slaps on the wrist. The likes of Paul Ryan express "dismay" and "concern" every time Trump issues a new immigration ban, praises the KKK or acts on one draconian policy or another. Krugman isn't optimistic that Arpaio's pardon will lead to action to back up the flimsy concern. If anything, he wrote, "We may well be in the early stages of a constitutional crisis. Does anyone consider it unthinkable that Trump will fire Robert Mueller, and try to shut down investigations into his personal and political links to Russia? Does anyone have confidence that Republicans in Congress will do anything more than express mild disagreement with his actions if he does?"

Probably not. Krugman left us with this chilling thought: "There’s also a word for people who, out of cowardice or self-interest, go along with such abuses: collaborators. How many such collaborators will there be? I’m afraid we’ll soon find out."