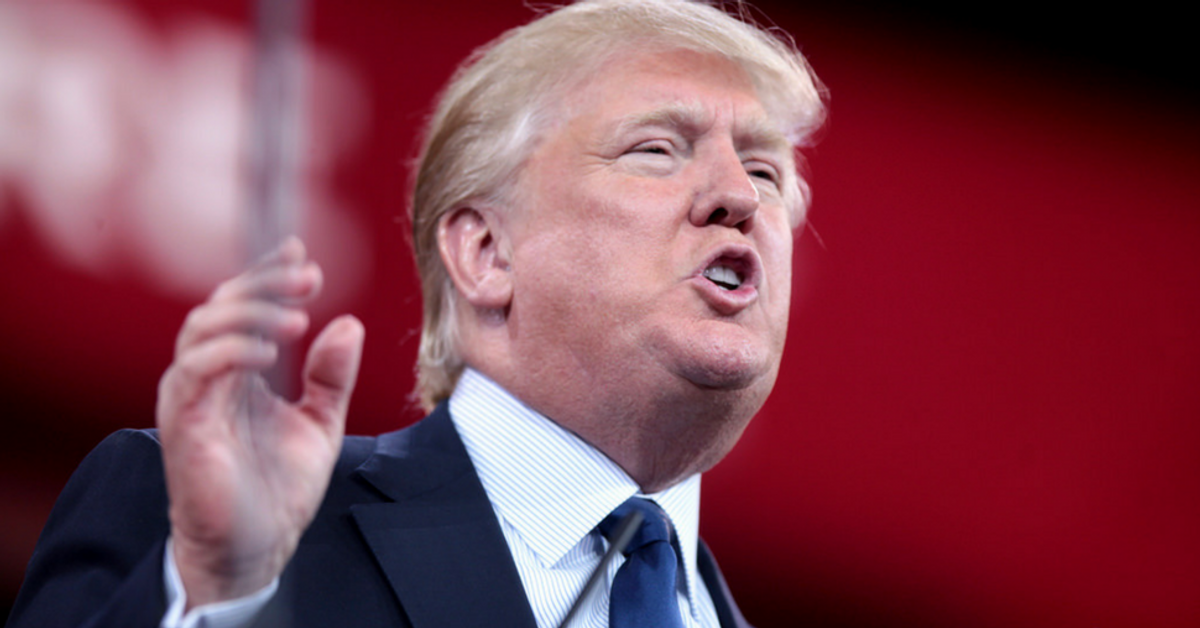 As Tropical Storm Harvey made landfall in Texas this week, pelting Houston and the surrounding areas with unprecedented levels of rainfall and flooding, President Donald Trump tweeted about... his proposed border wall.
It's not that the president hasn't tweeted about Houston. In fact, he has, as the tweets below can attest.

But the president––who is notoriously thin-skinned––continues to make headlines for his often incendiary behavior as federal agencies, private businesses and human beings from all walks of life step up to lend aid during the crisis.

Shannon Watts, the founder of Moms Demand, a self described "grassroots army working to end gun violence," tweeted a photograph of a submerged Houston side-by-side with Trump's tone-deaf tweets, which have served as a litmus test for how the president would respond during the first natural disaster to strike the United States during his term.

The consensus is one of failure:

Let's examine the first tweet the president sent while the storm battered the Texas Gulf:

The book, Cop Under Fire, by Sheriff David A. Clarke Jr., contends that "America has become increasingly divided and polarized in recent years" due to "racial tension, animosity toward law enforcement professionals, government corruption, and disregard for the constitutional process."

It also features a foreword written by Fox News commentator Sean Hannity, who says the book is "a must-read for people who love this great country."

Several likened the president's support for David Clarke to his support for Joe Arpaio, the former Arizona Sheriff who was convicted of abuses of power, including failure to investigate sex crimes and unlawful enforcement of immigration laws. Clarke, who spoke at last year's Republican National Convention, has accused Planned Parenthood of "genocide," has said blacks "sell drugs and involve themselves in criminal behavior instead of a more socially acceptable lifestyle" and has described Black Lives Matter as a "hate group."

It's no secret that the president has often preoccupied himself with his electoral win. While president-elect, for example, Trump made an outrageous and, experts agree, wholly false claim on Twitter that “millions" of votes were cast illegally, ironically casting doubt upon the legitimacy of the election he supposedly won.

Not surprisingly, many on social media, like the Twitter user below, slammed the president for tweeting about his electoral victory while the storm raged.

It's time to examine the last tweet of the bunch, in which the president references his proposed border wall:

Trump made the proposed border wall one of the cornerstones of his campaign. Since taking office, he has called for Congress to allocate money for the wall instead and have Mexico pay the United States back. He has also continuously sparred with Mexican President Enrique Peña Nieto over the proposal.

In response, the Mexican government reiterated that it would not pay “under any circumstances” for the wall.

“As the government of Mexico has always maintained, our country will not pay, under any circumstances and under any circumstances, a wall or physical barrier built on US territory along the Mexican border,” reads a statement from the nation's foreign ministry. “This determination is not part of a Mexican negotiating strategy, but a principle of national sovereignty and dignity.”

The Foreign Ministry offered  “all the help that can be provided” in response to the devastation across the state of Texas from Tropical Storm Harvey.

“The government of Mexico takes this opportunity to express its full solidarity with the people and government of the United States for the damages caused by Hurricane Harvey in Texas and reports that we have offered the US government all the help and cooperation that can be provided by the different Mexican governmental agencies to deal with the impacts of this natural disaster, as good neighbors should always do in times of difficulty."

Although the president has declared Texas an emergency disaster area and promised to send aid, the Trump Administration’s FY 2018 budget blueprint for the Federal Emergency Management Agency (FEMA) has been the subject of much derision for cutting roughly $667 million from FEMA state and local grant programs which play key roles in disaster response.

These cuts also include $90 million from FEMA’s Pre-Disaster Mitigation Grant Program funding to local communities and all $190 million of funding for the National Flood Insurance Program’s Flood Hazard Mapping and Risk Analysis Program, which, according to its website, "identifies flood hazards, assesses flood risks and partners with states and communities to provide accurate flood hazard and risk data to guide them to mitigation actions."

To date, Shannon Watts's tweet has been shared nearly 47,000 times across Twitter, an indication that resistance to the president's behavior––and his policies––is alive and well.