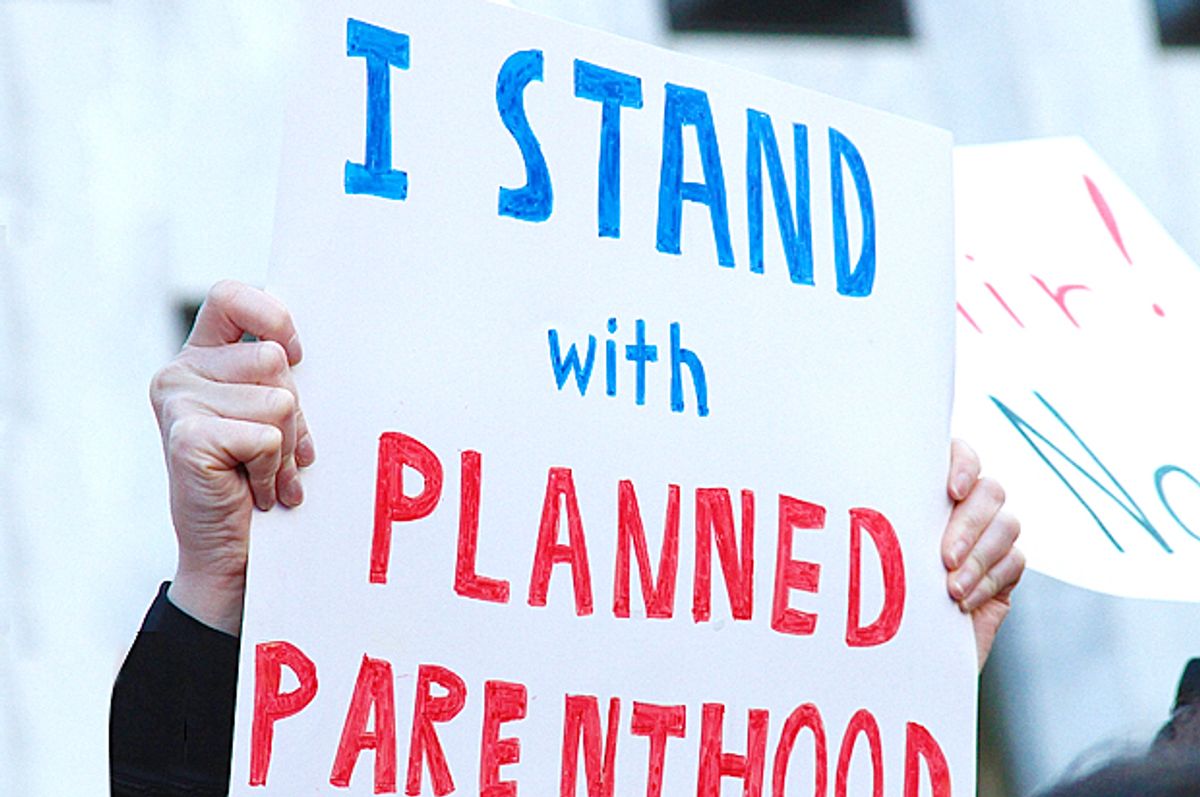 For the better part of a decade now, anti-choice activists and Republican politicians have been pushing the idea of defunding Planned Parenthood. Anti-choicers like to claim that these attacks are about abortion, which is at best peripherally true. Government money never pays for abortions at Planned Parenthood, only for contraception and other non-abortion services. In order to "prove" that the assaults on Planned Parenthood are not a covert effort to deprive women of contraception and treatment for sexually-transmitted diseases, right-wing activists and politicians have taken to claiming that the family planning services offered by Planned Parenthood can easily be replaced with public clinics, private doctors and other programs.

In some cases, anti-choicers like to argue that "crisis pregnancy centers" — facilities set up to resemble abortion clinics, in hopes of luring in poorly-informed pregnant women and pressure them not to have abortions — could step up and fill the holes left by the defunding and shuttering of the nation's largest women's health organization. In 2012, Texas Gov. Rick Perry (now Donald Trump's energy secretary) attended the ribbon-cutting ceremony for one such center, touting it as a place low-income women could go for reproductive health care, now that the state had cut Planned Parenthood funding from its family planning program.

This argument that crisis pregnancy centers (CPCs) could take Planned Parenthood's money and effectively replace its family planning services got put to the test in Texas. The Heidi Group was granted $5 million in family planning funds by the state to provide health care for 17,000 women in 2017, even though its leader, Carol Everett, is so ignorant about sexual health care that she once argued that abortion clinics could contaminate the water supply with sexually transmitted diseases.

To the surprise of nearly no one outside the Texas Republican Party, this plan appears to have been a massive failure. Texas Health and Human Services took back more than $4 million in grant money from the Heidi Group. The group had promised to get low-income women matched with doctors to provide family planning services but was either unable or unwilling to actually do so. (The Heidi Group did not return Salon's request for comment.)

“The money was taken away from an international organization that has been doing this for years and years, and given to an evangelical, anti-choice activist group with no medical training, no medical capabilities whatsoever to do what they were entrusted to do," said Dr. Dana Kusnir, a Dallas abortion provider affiliated with Physicians for Reproductive Health. "It’s ludicrous.”

In an April letter to state Rep. Jessica Farrar, the Texas HHS said that the Heidi Group "has partnered with healthcare providers across the state to offer quality women's healthcare services." Supposedly these providers would then bill the state through the Heidi Group, but in practice very few women actually received any health care this way. Trusting a bunch of Christian right activists who disapprove of most forms of sexuality to manage the health care needs of sexually active women was not, it turns out, such a great idea.

“I think they thought it was easy," said Blake Rocap, the legislative counsel for NARAL Pro-Choice Texas. "This just goes to show how difficult it is to provide these services, and how important specialized family planning clinics are, whether those clinics are Planned Parenthood or independent family planning clinics. You can’t just rebuild this infrastructure after you’ve totally broken it from scratch.”

The problem, Rocap said, is that you can't simply throw money at a problem and hope that will fix it. Planned Parenthood is extremely effective at delivering health care services because that's what it has done for a century. It has physicians and nurses on staff, a well-organized system for handling contraception and other medical necessities, a brand name that most people trust and decades of community outreach efforts that make it easy to match women in need. Heidi Group tried to replace that with a patched-together list of medical providers and a half-hearted advertising campaign, and completely failed.

"Talk about waste, fraud and abuse," Rocap added. "You get this politically well-connected yet totally unqualified contractor that gets the biggest grant, can’t do the work they’re supposed to do and don’t deliver on a program that’s supposed to save money.”

The Heidi Group may be out their $4 million, but this debacle points to a larger problem: Texas legislators love throwing money at CPCs, even though these facilities and the groups behind them serve no legitimate medical purpose and exist only as propaganda outlets for the anti-sex brigade.

Before these latest efforts to redirect money earmarked for family planning to groups that oppose the very idea of family planning, Texas started a similarly themed program called Alternatives to Abortion. That directly funds CPCs in their mission of luring women into fake clinics under false pretenses and bullying them over their personal choices. The Republicans who control the Texas legislature have gradually expanded the size of the program, giving the program nearly $40 million in state funds for two years.

This kind of wasteful spending is particularly galling in a week when the state is getting hammered by Hurricane Harvey, spotlighting some of the dangers of spending money on things like anti-choice propaganda instead of investing in environmental safeguards and infrastructure.

In fact, Republicans are getting increasingly creative about what money they will seize and hand over to the fetus fan club. Mike Schofield and Matt Krause, two Republican state legislators, successfully moved $20 million from the Texas Commission on Environmental Quality to Alternatives to Abortion.

"The American Lung Association estimates that about 570,000 Texas children suffer from asthma; about 100,000 in Harris County alone," wrote the Houston Chronicle editorial staff in protest, pointing out that true "pro-life" values would be aimed at protecting actual children, not hypothetical ones. But, of course, "life" was never the point of the anti-choice movement, whose principal and futile goal is to stop women from having non-procreative sex.

That's not likely to work, but the well-funded anti-choice movement can take heart in knowing they have caused sexually active people to suffer. Rates of gonorrhea, syphilis and chlamydia are on the rise. Texas health officials report alarming "clusters" of HIV transmission popping up in 16 areas of the state.  The rate of second-trimester abortions, which are more painful and expensive, is on the rise as women in the state have more difficulty getting contraception and early-term abortions. Texas now has the worst maternal mortality rate in the developed world and has fallen behind the rest of the country when it comes to the decline in teen births. The state's Medicaid system is straining as the number of births to low-income women rose, in part because they lack affordable or convenient access to contraception.

It's a welcome development that the state's health agency reneged on its grant to the Heidi Group, but the larger problem is that Texas legislators "are prioritizing their politics and their agendas over Texas women getting the health care they need," as Kusnir said. As long as voters in the Lone Star State keep on electing politicians who care more about women having sex than about the health needs of their constituents, that larger problem will continue.