Trump's shadowy Moscow deal: Could this be the key that unlocks the whole Russia scandal?

"We will get Donald elected": The tale of a Trump Tower that never was — and a president with something to hide 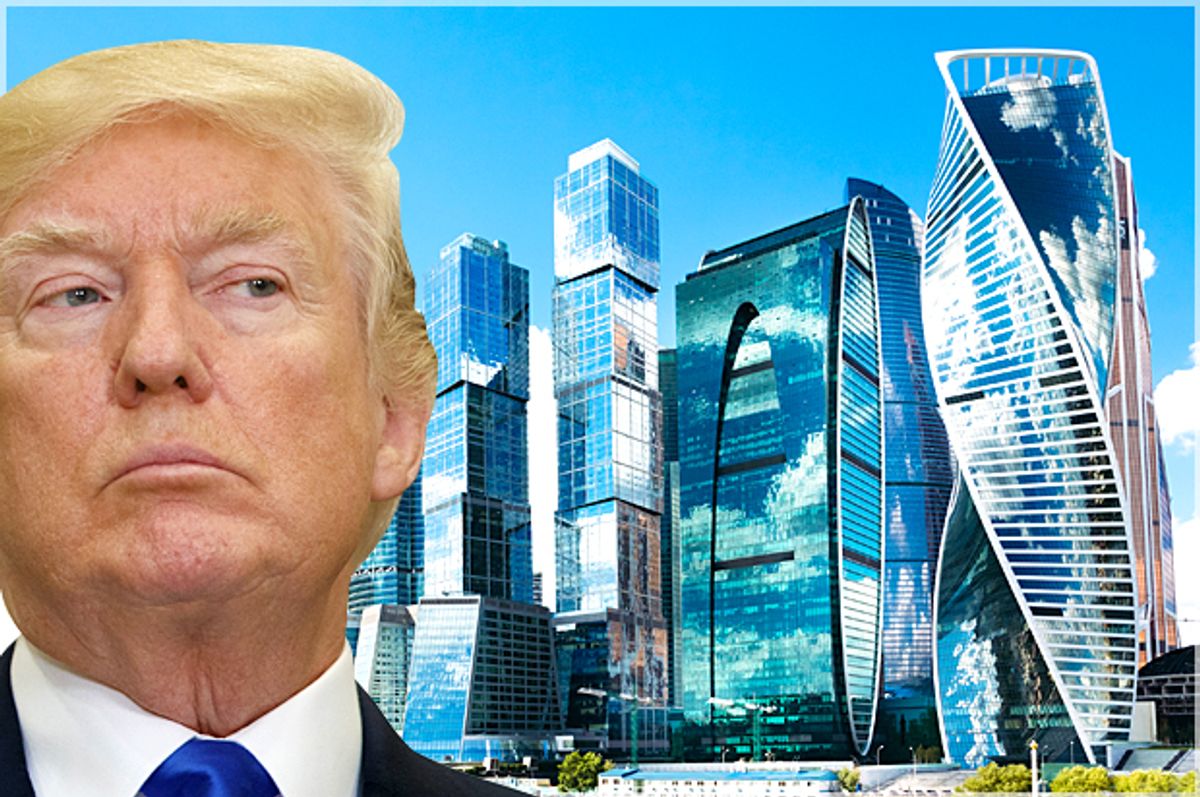 President Trump is a compulsive liar; we know that. He lies about things that are world-shattering and things that are trivial in equal measure. One of the more obvious lies he told during the campaign and since he's been in office is his oft-repeated claim that he knows nothing about Russia and that the whole Russia scandal is a hoax made up by the Democrats to deny him his glorious electoral victory.

As CNN summarized in this article, Trump used to brag about his knowledge of Russia and claimed that he had a personal relationship with Russian president Vladimir Putin -- until February of 2016 when he suddenly began to claim that he had never met the man and had never done any business in Russia other than the now-legendary Miss Universe pageant in 2013. He slipped up at least once in the ensuing months, telling Bret Baier of Fox News he might know Putin but couldn't talk about it, but for the most part his line was this one, told to a Miami TV station in July of 2016: “I have nothing to do with Russia, nothing to do. I never met Putin, I have nothing to do with Russia whatsoever.”

As I said, Trump lies. A lot. So for a long time it was impossible to know whether he was lying when he said he was involved with Russia and knew the country well or when he said he had nothing to do with it whatsoever. That's been cleared up.

Last spring Forbes reported that Trump had been in the process of putting together a deal with the Agalarov family, oligarchs who had helped bring the Miss Universe pageant to Moscow, to build a Trump Tower in the Russian capital. Emin Agalarov, the pop-singer son of billionaire developer Aras Agalarov, told Forbes that they let it go when Trump decided to run for president but that they considered it to be on hold. (And yes, these Agalarovs are the same folks whose publicist arranged the infamous "Clinton dirt" meeting between Donald Trump Jr. and the Russian lawyer.)

On Sunday night, The Washington Post  reported on yet another plan to build a Moscow Trump Tower in 2015 and beyond, while Trump was running for president. And on Monday, the paper, along with The New York Times, released emails about the project written by Trump's longtime business partner Felix Sater and his personal friend and Trump organization executive, Michael Cohen. According to the Times:

Sater's emails were sent to Cohen and boasted of connections to Russian President Vladimir Putin that would allow the project to get completed and help "get Donald elected."

Cohen emailed Putin's personal spokesman to ask for help in getting the stalled project started again.

Later in the day, ABC News reported that Trump had signed off on the letter of intent in the fall of 2015, during the presidential primary campaign, confirming that he knew about the deal and proving once and for all that he'd been full of it when he insisted he'd never had any dealings with Russia.

I will get Putin on this program and we will get Donald elected. Our boy can become president of the USA and we can engineer it. I will get all of Putin's team to buy in on this, I will manage this process.

Why building this tower was supposed to lead to Trump's election is a mystery. Oddly, none of the emails the Times excerpted directly mention the tower project, raising plenty of questions about exactly what they might have been talking about.

Journalist Marcy Wheeler, among others, wondered why Cohen would have reached out to Putin's communications chief about a real estate licensing deal. That communications chief, according to the "Steele dossier," was "the 'main protagonist' of the kompromat campaign against Hillary." Wheeler speculated that this alleged Trump Tower deal, never before revealed, might be cover for another kind of "deal" altogether.

Whether or not this turns out to be some kind of collusion or conspiracy with the Russian government to defeat Hillary Clinton and get Trump elected, we've never seen anything like this: Associates of a presidential candidate directly asking the leader of a foreign adversary to help them arrange for what amounts to a multimillion-dollar payoff. It's shocking on its face, especially since Trump lied about it repeatedly.

There has long been keen interest in both Cohen and Sater as part of this Russia investigation. The two men were boyhood acquaintances growing up in Brighton Beach, Brooklyn, around a lot of Russian émigrés. Sater is Russian-American, and Cohen is married to a Ukrainian national; both have years of experience working in the gray shadows of the Russian financial and business world. They also have years of experience working with Donald Trump on many projects, including Trump Soho, which was sued for fraud. In recent years, Trump's real estate projects have sold nearly $100 million in condos to wealthy Russians.

Sater did time in prison for assault and was later convicted for fraud, after which he apparently went to work as an FBI informant. He has also claimed to have been involved with the CIA, tracing illegal arms deals in the Russian black market. He is, to say the least, an interesting character, and one that special counsel Robert Mueller presumably has his eyes on.

About two weeks ago, this rumor from Paul Wood at The Spectator floated around the internet and no one knew what to make of it:

For several weeks there have been rumors that Sater is ready to rat again, agreeing to help Mueller. "He has told family and friends he knows he and POTUS are going to prison," someone talking to Mueller’s investigators informed me.

Sater hinted in an interview earlier this month that he may be cooperating with both Mueller’s investigation and congressional probes of Trump.

“In about the next 30 to 35 days, I will be the most colourful character you have ever talked about,” Sater told New York Magazine. “Unfortunately, I can’t talk about it now, before it happens. And believe me, it ain’t anything as small as whether or not they’re gonna call me to the Senate committee.”

Maybe he's as much of a BS artist as his friend in the White House. He certainly seems like the type. But if this is true it might mean we finally learn whether Trump was merely making corrupt deals with Russian oligarchs to line his own pockets or was actively colluding with the Russian government to become president of the United States. What a choice.