Trump awkwardly tries to play the role of a concerned president, but as usual he's obsessed with bigness 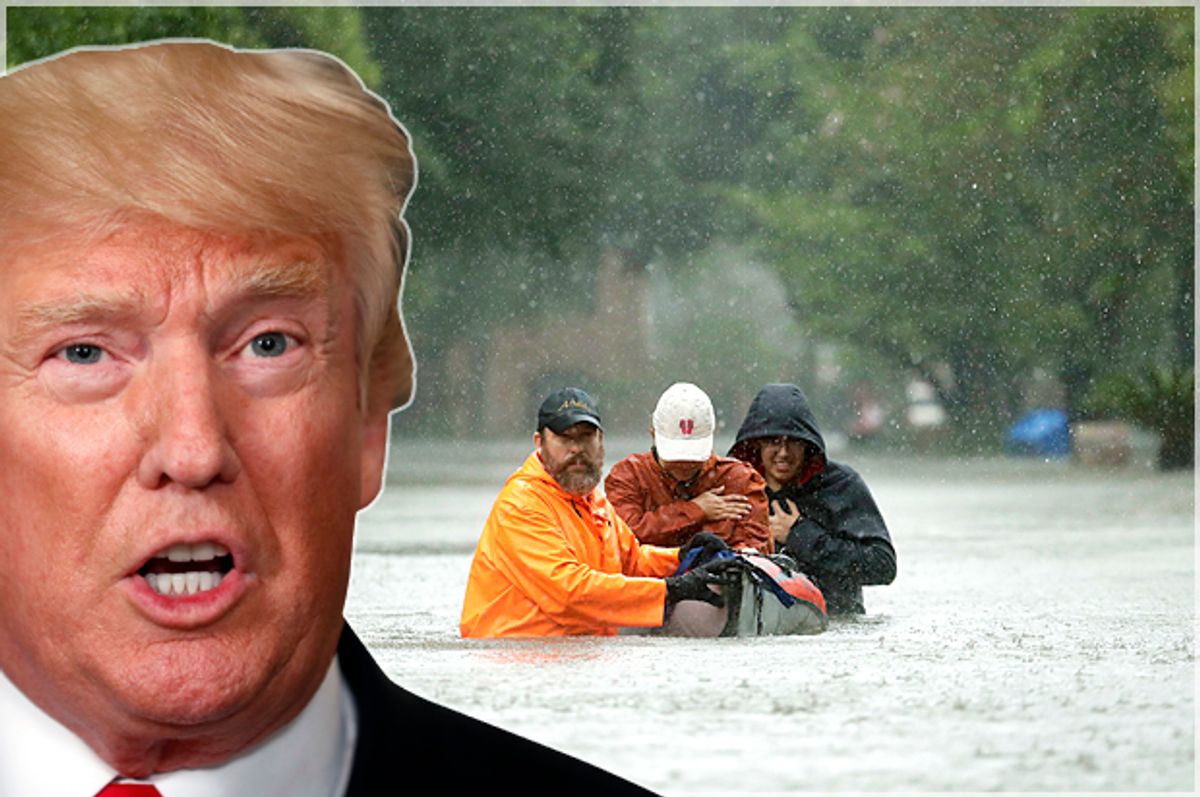 In its premiere season, “The President Apprentice” has collapsed in the ratings race, and the star of the show, Donald Trump, has turned to disturbing antics to boost its prospects. As if trying to top his galling equivocation of white supremacists with counter-protesters in the immediate aftermath of the violence in Charlottesville, Trump has responded to his first major natural disaster with what can only be described as an awkward excitement. It seemed as though the president was over the moon about his big chance to preside over what he called “an event of epic proportions.”

While mainstream commentators still pine for signs of a presidential pivot, Trump’s rhetorical response thus far to Tropical Storm Harvey has relied on sophomoric superlatives to describe both the size of the devastating storm and the crowds and ratings it has garnered for him. While the coordinated government response on all levels will thankfully (it appears) help the Gulf Coast avoid another Katrina-scale disaster, Trump’s inability to muster the seriousness this moment requires may leave him as politically damaged as George W. Bush was by the storm that overwhelmed New Orleans, and his reputation, 12 years ago.

Without conveying much sense that he perceived human suffering, Trump has managed to focus the attention on himself since well before Harvey even made landfall. The campaign-style ad he tweeted before the storm drew swift criticism from conservatives like Sen. Chuck Grassley, R-Iowa, and right-wing media giant Matt Drudge. Trump could only offer a “Good luck to everybody!” as he boarded a helicopter for Camp David. As the storm barreled down on Houston, the White House released one of the most consequential Friday news dumps in modern history.

“In the middle of a hurricane, even though it was a Friday evening, I assumed the ratings would be far higher than they would be normally,” Trump said later, to account for the timing of the White House announcement that he had issued a pardon to Joe Arpaio, the disgraced ex-sheriff of Phoenix.

“Historic.” “Massive.” “Biggest ever.” “Thanks!” In more than a dozen tweets about the hurricane, the president used exclamation marks: “Even experts have said they’ve never seen one like this!”

In a move apparently meant to project confidence, Trump traveled to nearby Corpus Christi, Texas, on Tuesday where he climbed atop a ladder to address his audience. “What a crowd. What a turnout,” he proudly remarked. As of late Tuesday afternoon, however, the president had yet to mention the 30 or more people killed by the storm and its effects, displaying an absence of empathy that’s hardly shocking at this point. Americans have perished and Trump, as per usual, is stuck on crowd size.

“We won’t say ‘congratulations,’” he told Texas state and federal officials gathered at the Corpus Christi firehouse, referring to the rescue and relief efforts they had temporarily suspended to attend his campaign-style event. “We don’t want to do that. We’ll congratulate each other when it’s all finished,” he said pledging a storm recovery "better than ever before." FEMA Director William Brock Long, Trump boasted on Tuesday, has become “very famous on television” due to Harvey.

Thousands of Texans have lost their homes, yet the president has yet to tweet any encouragement for other Americans to donate to relief organizations.

But whatever Trump says or does while Harvey is still wreaking havoc on Houston is far less important than what he and his administration do in the weeks ahead. It’s a good sign, more or less, that Trump brought along some pertinent Cabinet members to Texas on Tuesday. They are also wholly unprepared to handle a disaster of this proportion and their leadership is what will matter most as the Houston area struggles to recover.