Ivanka Trump's latest sell-out is no surprise: Why would she stand up for workers now?

Ivanka Trump claims to believe in equal pay for equal work. But deep down, she's just like her dad 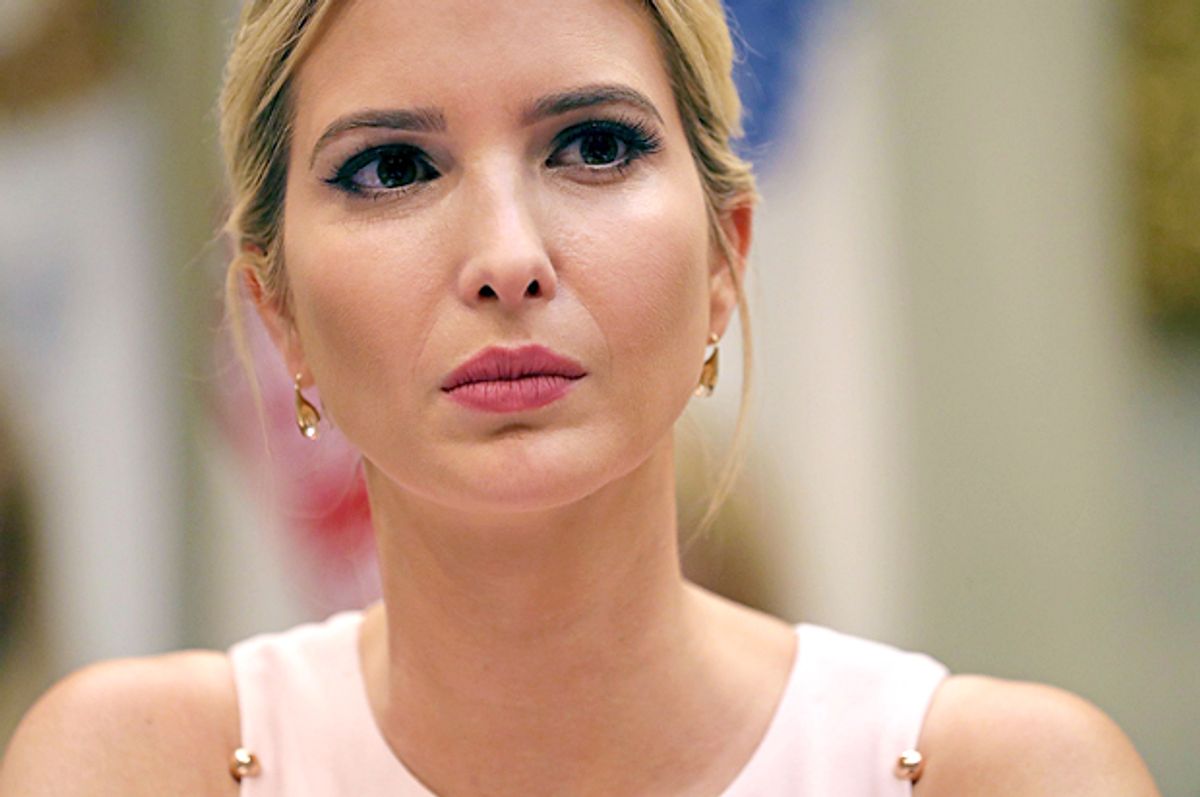 The perfect anecdote to describe Ivanka Trump, President Donald Trump's daughter and trusted advisor, comes from her youth. When she was a child, the Trump scion set up a lemonade stand in her mansion's cul-de-sac, and when no one passed by to drink the lemonade, her family's domestic workers "dug deep for their spare change."

In other words, she had no qualms as a child about taking money from working-class people — the people who worked for her family, no less — when she was little, and clearly didn't have a parent who stood up for them. So why should she start caring about them now?

Looking back, it's amazing to think that Ivanka was lauded for her speech at the Republican National Convention, in which she advocated for common-sense issues that are popular and would help the American economy but are taboo in Republican circles, like increasing affordable health care and closing the pay gap.

Of course, Ivanka Trump has given up on all of that, now that she's working in the White House. In the battle between working- and middle-class Americans and her father, her old man has won. As reported in Newsweek, Ivanka backed the scrapping of "an Obama-era policy that would have required business owners to document how much they pay their workers alongside their gender, race and ethnicity." This means we'll never know the true extent of the wage gap nor be adequately equipped to proactively fight it, and women, especially those without college degrees — 62 percent of whom voted for Trump — will continue to suffer.

Ivanka's non-confrontational stance could be traced back to the earliest days of the Trump administration, when she relegated herself to the sidelines intentionally. In June, she said that she "stays out of politics," which is a very weird thing to say as an adviser to the most powerful politician in the world. She added, "I advise my father on a plethora of things."

None of her advice so far has been taken. And Vanity Fair this week pointed out just how much the first daughter has failed:

When Ivanka threw herself into the analysis of the Paris climate accord and the implications of the U.S. pulling out, she talked supportively to Andrew Liveris, chairman and C.E.O. of the Dow Chemical Company, about a letter signed by C.E.O.s urging her father not to abrogate the deal. The ad ran, but Trump pulled out anyway. When Ivanka later tried to distance herself from her own efforts on climate change, the disavowal hurt her credibility with pro-environment business owners and Silicon Valley executives. To them, the episode showed not only her lack of pull with her father but also an unwillingness to stand on principle. A senior White House official said, in Ivanka’s defense, that “for something that was a campaign promise from the president, these are unrealistic expectations. She can get people into the White House to make their case, and that’s what she did.” Ivanka has tried hard to persuade associates and others that she is focusing on a few issues — job creation and women’s empowerment, including paid family leave, child-care tax credits, workforce development, and STEM education—and should be judged only on the success or failure of these, not on the broader positions of her father’s administration. But if her main value in Washington is her access to her father and she is unable to sway him, then she is simply a 35-year-old former real-estate and retail executive in over her head. Their supporters point out that they are aware of charges of nepotism but also point to their competence in managing real-estate deals and building their own businesses.

When asked by Planned Parenthood's founder to keep the women's health group funded, Ivanka collapsed like a pair of terribly made heels; instead, she went back to the organization and suggested they instead just stop doing abortions. Her forays into lobbying for paid family leave have gone nowhere. And when her father tweeted that he was banning transgendered people from the military, she didn't speak up. Ivanka's politics, as one person told Vanity Fair, is filled with "platitudes and pabulum."

A cursory glance at her Twitter profile can tell you that. A day before her father defended protesters marching with neo-Nazis and white supremacists by saying there were bad people "on both sides," Ivanka tweeted: "It was beautiful to see thousands of people across the U.S.A come together today to peacefully denounce bigotry, racism & anti-semitism. We must continue to come together, united as Americans." Clearly her words had no effect on the president.

But Ivanka's naivete isn't new whatsoever. Last year, her own interns admitted they were unpaid in a since-deleted company blog post, of all places. And it's not surprise that in Washington, where people are eager to see if you're full of it or not, they have discovered the true Ivanka Trump. More from Vanity Fair:

The disappointment among the kinds of people who were looking to [Ivanka and husband Jared Kushner] to be a moderating influence is undisguised. As a political consultant puts it, describing the current mood, “You can’t prevent him from trying to de-fund Planned Parenthood or getting out of the Paris agreement? What are you good for?” When Ivanka said soberly in an interview that she tries “to stay out of politics,” she was mocked mercilessly on late-night shows and on Twitter. As a guest on Seth Meyers’s program, Maya Rudolph channeled the First Daughter and echoed Ivanka’s statement, putting “politics” in air quotes: “We get it. We get it,” Rudolph said. “You are an adviser to the president, but not into ‘politics.’ ” She went on to note that Ivanka spoke through her teeth as if she had “a sexy secret,” in the manner of a saleswoman in a lingerie store. What Ivanka was probably trying to say was that she had gone to Washington hoping to work on commonsense programs that Democrats, Republicans, and independents could all get behind. It’s the kind of studied naïveté that fewer and fewer Washington figures are buying today.

And now, Ivanka is thinking about moving back to New York next year, so she can drain herself from the swamp and from Oval Office staffers who deride her as "princess royal."

Remember when, back in August, Ivanka pretended to be in favor of equal pay for equal work?

Since then, her father has forgotten about the equal pay — and the rest of the middle class while we're at it — and it seems Ivanka has, too.

Maybe it's time to go back to New York after all.