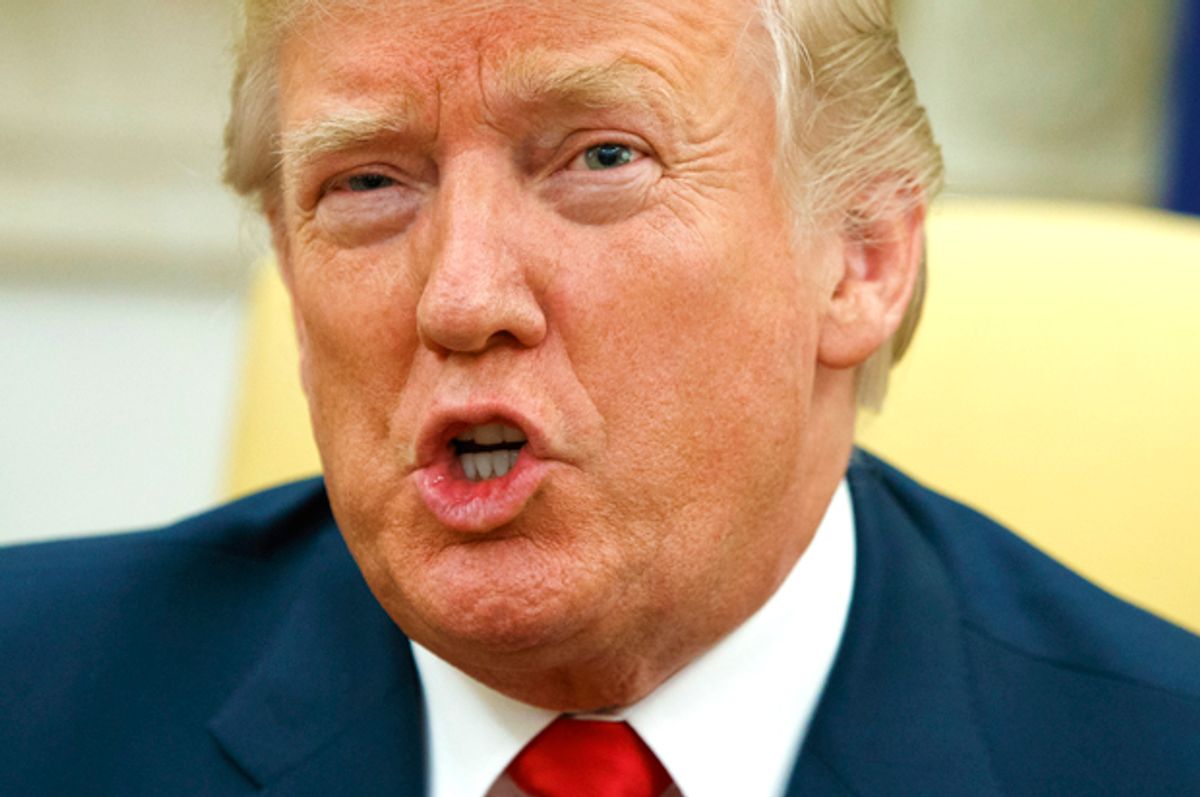 A couple of days ago, Salon's Bob Cesca made the point that the tie that binds Donald Trump to his followers is his eagerness to provoke liberals. He used this tweet from a Fox News analyst and Townhall.com writer to illustrate the case:

Personally, I thought the people wearing T-shirts like these, which are still selling briskly on Amazon, express this sentiment even better.

These are obviously immature individuals who, like Donald Trump, seem to revel in juvenile taunts against people they don't like. And they don't like a lot of people.

So far, that base of Trump champions is holding fast in the opinion polls. The latest Pew Research survey was released on Tuesday, and it has him at a 36 percent approval rating, which tracks with most of the other polling, including Gallup, which has had him between 35 percent and 40 percent for most of his term.  It's when you dig into the details of the Pew poll that it becomes more interesting.

This particular poll surveyed how people describe the Trump presidency. The poll asked people whether they agreed with Trump on the issues, and the results break down fairly predictably on partisan lines. Just over two-thirds of Republicans agree with his positions, which isn't a great number for a president in his first year, whose party nominally controls all branches of government, but it's still a strong majority. Unsurprisingly, 94 percent of Democrats and Democratic leaners disagree. All in all, 15 percent of respondents agreed with Trump on all or nearly all issues, 18 percent agreed with him on many issues, 21 percent agreed on a few issues -- and 45 percent didn't agree with him on issues at all.

But Pew also asked people what they think of Trump's conduct in office. Again, most Democrats and Democratic leaners are appalled, as one might expect. On this, Republicans are more divided: Nineteen percent don't like his conduct, while 46 percent say they have mixed feelings. But 34 percent like the way he conducts himself as president.

In fact, a larger proportion of Republicans either accept or embrace Trump's aberrant presidential conduct than approve of his positions on policy. And here's the kicker: when asked what people liked most about Trump's presidency, the ones who approve of his performance actually cited his personality and conduct four times more often than his policies. In other words, those who like him like him because of his unseemly, unpresidential behavior, not in spite of it.

That group represents about one-third of the Republican party, the same third that flocked to Trump during the primaries and enabled him to win over a crowded field that split the other two-thirds almost to the very end. These are older and more conservative white people, for the most part, who believe he should not listen to other Republicans and should follow his own instincts.

These are the people who some might refer to as "a basket of deplorables." They like Trump's coarse personality, and approve of the fact that he treats women like his personal playthings. They enjoy it when he expresses sympathy for neo-Nazis and neo-Confederate white supremacists. They cheer when he declares his love for torture, tells the police to rough up suspects and vows to mandate the death penalty for certain crimes. (Which of course the president cannot do.) Trump's embrace of the odious birther movement was one of his greatest selling points, at least with this crowd.

This cohort of the Republican party didn't vote for Trump because of his supposed policies on trade or his threat to withdraw from NATO. They voted for him because he said out loud what they were thinking. A petty, sophomoric, crude bully is apparently what they want as a leader.

While these people are endlessly fascinating to the press, there's an important footnote here: According to the Pew survey, they only comprise 16 percent of the population. That's tens of millions of people, which is disturbing, but it's a long way short of a majority. So surely the other 65 percent of Republicans, the ones who find Trump's personality and conduct unseemly, would not want to vote for congressional and Senate candidates who align themselves with him, right?

Unfortunately, according to this Vanity Fair article by David M. Drucker, the GOP consultant class doesn't think so. They are among the 65 percent who find the president a ghastly embarrassment to their party, but that won't stop them from pushing their candidates to embrace him and his style of politics:

[I]n meeting after meeting, Republican consultants have had one consistent message for clients and prospective clients running for office in 2018. It’s a message they tell me will not change, even after the avalanche of criticism directed at Trump by fellow Republicans for his failure to immediately condemn the racists who gathered in Charlottesville and his decision to conflate them with counter-protesters. “Your heart tells you that he’s bad for the country. Your head looks at polling data among Republican primary voters and sees how popular he is,” said one Republican strategist who, like most of the nearly two dozen I interviewed for this story, requested anonymity in order to speak candidly and protect their clients. “It would be malpractice not to advise clients to attach themselves to that popularity.”

That strategist has a point, unfortunately. Those over-50, white, non-college-educated voters are exactly the hardcore Republicans who come out in midterm elections. They're the people who stormed the castle in 2010 and 2014 to stack the Congress with far right officials. And they scare the hell out of the GOP establishment, which -- even after years of flag-waving and accusing liberals of hating America -- is apparently willing to do whatever it takes to perpetuate the toxic politics of the man it perceives as "a bad guy."

We are at or near a dangerous tipping point in American politics. Roughly 16 percent of the population, an angry, loud minority whose motive for political participation is mostly to tell others "fuck your feelings," are in control of one of America's two parties and have their own man in the White House. That's not sustainable for the Republican Party or the country.