He can't explain why it happened and thinks it's all about to collapse, but this punk vet kinda just hit it big 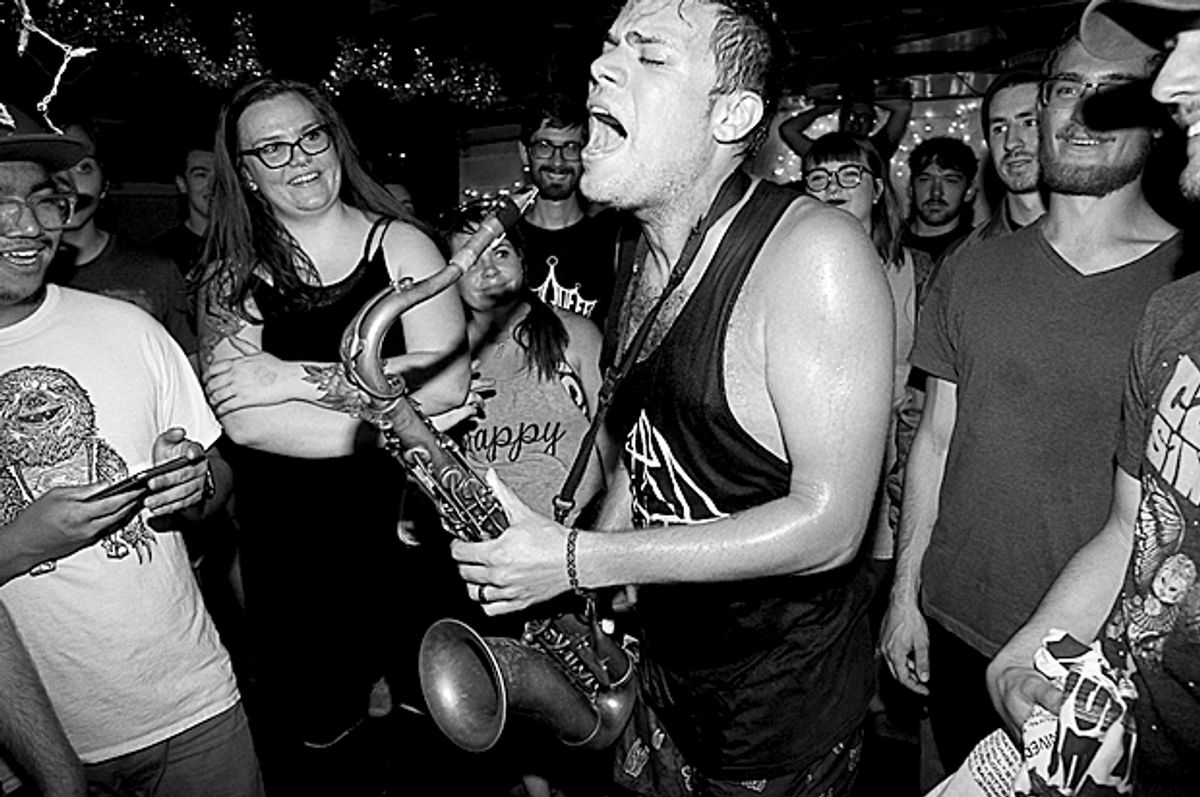 Jeff Rosenstock has had too much coffee. The mid-30s Brooklynite interrupts himself as he speaks, trailing off in asides, contradicting his points. He’s highly aware of how he might come off regarding everything he says and is quick to make fun of himself. “You only get one life,” he says earnestly, about his decision to pursue a solo career. Then realizing he accidentally blurted out a cliché, his tone turns sarcastic: “Is that a thing? ‘You only live once.’ Has anybody ever said that before?”

The punk rocker speaks with me backstage at the Bottom of the Hill in San Francisco, CA, before his sold-out show — it’s been sold out for a week. At least half of his shows this tour sold out. (“This was the best tour as far as attendance goes by far.”) Later during the night, I watch as the jam-packed audience rabidly sings along to every one of his songs. I’ve followed Rosenstock’s career for nearly a decade, starting with his band Bomb the Music Industry, which always had a loyal, cult following of weirdo punkers. This past year, he’s jumped to a whole new level. He’s just as surprised about it as anyone else.

His solo career started nearly five years ago, pretty much immediately after the spastic, genre-hopping punk ensemble Bomb the Music Industry announced they were breaking up, in 2012. (They played their final show in January 2014.) He released his debut solo record, "I Look Like Shit," later in 2012. It was recorded by himself in his bedroom, comprised of some unused Bomb the Music Industry demos, new songs and some covers.

"It’s a bit of a reset button kind of. That’s how Bomb started out too, recording stuff in my bedroom. That’s where everything starts out,” Rosenstock says.

The show is already underway as we interview. Supporting act Laura Stevenson, an old friend of his, former Bomb ensemble player, and someone also having a successful career these days as an alt-rock star on the rise, is about to go on. Rosenstock isn’t quite sure how to process the fervor of the crowds. He is stuck somewhere between shock, excitement, joy and terror. (“It’s not like we’re 8,000 people or anything. It’s just the clubs we used to play that were empty before, now have people in them, which is nice.”)

That’s a bit of hyperbole, which slips out of Rosenstock’s lips frequently, generally in the form of extreme self-depreciation. Rosenstock has been actively releasing music and touring the country since he was 18, and he’s always had people come to his shows. First with his kinetic ska-punk band the Arrogant Sons Of Bitches. Their final record, "Three Cheers for Disappointment," is aggressively self-depreciating. “So Let’s Go! Nowhere” captures his despair in post-911 New York with one of the catchiest hooks ever written.

Bomb the Music Industry formed in ASOBs’ ashes, first as a Rosenstock solo project and later as one of the most important DIY punk bands in the early 2010s, eventually joining forces with Asian Man Records, who co-released much of their catalog. Bomb record "Scrambles" (2009) hops around between punk, electronic, indie, ska, piano ballads in a disjointed, yet brilliant way. Rosenstock conducted the band in an equally atypical fashion. He released all his albums online for free via his label Quote Unquote Records, years before Radiohead or Chance the Rapper made it cool to give away music (Asian Man Records ended up releasing the music in its physical formats). The final album, "Vacation," released in 2012, was the most palatable thing they’d written. It did better than prior Bomb albums, but didn’t take them to the next level, which, in part, was why they called it quits.

“We were swinging for the fences with that one. I’m super proud of that record. When I’m 50 years old that’ll probably be my favorite one,” Rosenstock says.

Bomb’s story was chronicled in the 2016 documentary "Never Get Tired."

Rosenstock’s three solo records aren’t a huge departure from Bomb the Music Industry, musically. He has gotten more subtle about incorporating his scatterbrained influences. Unlike his debut, the second and third record, "We Cool" (2015) and "Worry" (2016), were recorded with a full band and released on popular indie/punk label SideOneDummy, though that arrangement sort of just happened.

His mixture of punk, indie and ’90s alt-rock has earned him an ever expanding fan base, and is the subject of an increasing amount of music blogs. Live, his five-piece, punk-style band is also rich in keyboards. Each member has one next to them, which does gets used.

Earlier this year — the most surprising development in Rosenstock’s career, he says, was getting invited to play the Pitchfork Music Festival.

“We’re not the cool punk band. We’re pretty dorky. They usually have cool bands play that thing,” Rosenstock says. During the festival itself, back in July, Rosenstock — in typical self-depreciating style — said “Thanks to the person at Pitchfork who got fired by letting us play here.”

Kepi Ghoulie from ‘90s monster-movie-loving pop-punk band the Groovie Ghoulies, and one of the opening acts at Bottom of the Hill, thinks highly of Rosenstock.

“Jeff is one of these great artists that provides an outlet for the weirdos and the outcast, but still appeals to a regular music fan too. It’s a rare combination. For me it was growing up on Devo,” Ghoulie tells me backstage. “Every generation has someone. I don’t know if he’s the voice of a generation, but he’s the voice of a bunch of people. It’s very immediate. Not interpreting it, or dissecting it.”

The reason so many people have followed Rosenstock from project to project for so many years has to do with his ability to generate so much emotion during his shows. He screams out all of his uncomfortable, often complicated feelings. It’s cathartic. You feel understood and somehow less alone. This goes back to his early days. (“I couldn't deal with anti-depressants but now I'm anti-depressants/I'm all out of smokes and I'm wishing that I was dead again.”) and right up to "We Cool?" (“I got so tired of discussing my future/I’ve started avoiding the people I love/Evenings of silence and mornings of nausea/Shake and sweat and I can’t throw up.”) On Worry, he decided to challenge himself by writing about politics and social issues instead.

“After 'We Cool?' came out and talking to people about fucking depression and anxiety in a million interviews, I was like, I don’t want to talk about this anymore next time. So instead I get to talk about gun violence, which is perfect,” Rosenstock says.

To call "Worry" an album about political issues is to miss the point a little bit. It’s still a primal scream for Rosenstock, who instead writes about how everything happening in the external world makes him feel. The song “The Fuzz” for example, is about how he feels as a white male coming to terms with how people of color and the poor are mistreated by the police. (“I can't stand feeling violent/but it's hard not to sometimes/when the innocent get slaughtered/and the guilty get a fine.”

“I wasn’t trying to be like, here’s the statistics about police brutality. I thought about how the whole thing left me feeling, which was ‘I’m so sorry this is happening. I love you. I feel this immense anger. I hate feeling this immense anger. I hate feeling this sad and I don’t know what to do.’ That’s what the song ends up being about,” Rosenstock says.

When the record was released in October 2016, it seemed that we were at a fever pitch in terms of the news and politics making all of us feel overwhelmed, pissed off and full of immense frustration that needed some kind of outlet. Rosenstock insists to me that other punk bands just weren’t talking about politics in 2016 for whatever reason. Listening to "Worry" is as cathartic as any of Rosenstock’s other records, but it feels much more tied to the time it was released than anything else he’s released before.

“I don’t know as much as I wish I did know. I was trying to do something that was outside of my comfort zone. Nobody else was doing that,” Rosenstock says. “I don’t think I’m particularly smart about that stuff, but I drank a lot of coffee.”

The most surprising thing about the success Rosenstock has had as a solo artist is that he’d already had his big chance, and it just didn’t land. "Vacation," by all accounts, was supposed to be his breakout album. As a solo artist, he never put that kind of effort into “making it.” After "I Look Like Shit" came out, he toured solo a little bit, then took a break from the road and recording music.

By the time he recorded "We Cool?" in 2014, he just wanted to make a really good record, so he hand-picked a band from friends he’s gotten to know who he felt were better than him. His bassist John DeDomenici played with him in Bomb the Music Industry, guitarist Mike Huguenor had a band in the mid-2000s called Shinobu that was a big influence on Rosenstock, and drummer Kevin Higuchi was an amazing San Jose drummer that played drums in various bar bands prior to joining Rosenstock’s band. A true diamond in the rough. Dan Potthast, a legend with ska fans for his “psycho-ska” '90s ska-core band MU330, sang some backups. This lineup also recorded "Worry" and is Rosenstock’s touring band, including Potthast, who plays keyboards, guitar and saxophone.

One of Rosenstock’s friends had sent SideOneDummy some "We Cool?" demos. They replied just after Rosentock had recorded the album. His band was heading to Los Angeles to play a show the next day, so he invited everyone at the label to come check them out. They all clicked immediately.

Taking a break from the road and having that reset moment, has given Rosenstock newfound energy to be a professional musician. Also SideOneDummy’s interest led him to go ahead and try again and see what could happen, though unlike with "Vacation," he put almost no focus into the band’s financial success. He’s just been writing the best music he can and putting on the best show he can.

Mike Park, of Asian Man Records, is still close with Rosenstock, even though Park’s not releasing his new music anymore. In fact, he encouraged Rosenstock to sign with SideOneDummy when the opportunity came.

The kind of success he’s having does feel a bit uncomfortable to Rosenstock. He would deflect some of my talk of his importance, with talk of how short-lived this will all be. (“At whatever point whenever this all stops, I’ll probably be at an office doing some repetitive graphic design job for a very long time till I die.”)

When I press him, ask if he actually thinks this will all come crashing down at any moment — he has had fans since he was a teenager after all -- he relents, insists he’s simply reminding himself why he makes music in the first place, which isn’t for the money. If that ever ends, he’ll keep writing music, as long as he has something to say.

“I hope it doesn’t go away. I expect within a record or two people are going to be like, fuck this guy. His voice is scratchy. His songs all sound the same. This sucks,” Rosenstock says. “I’m not beholden to being successful. It’s more like, if I feel like there’s something in me that I need to write, I’ll write it. I’ve been writing music since I was really young. So I’ll probably always be writing music.