The man who filmed the season finale explains the reality behind Peter Dinklage's pensive, pensive stare 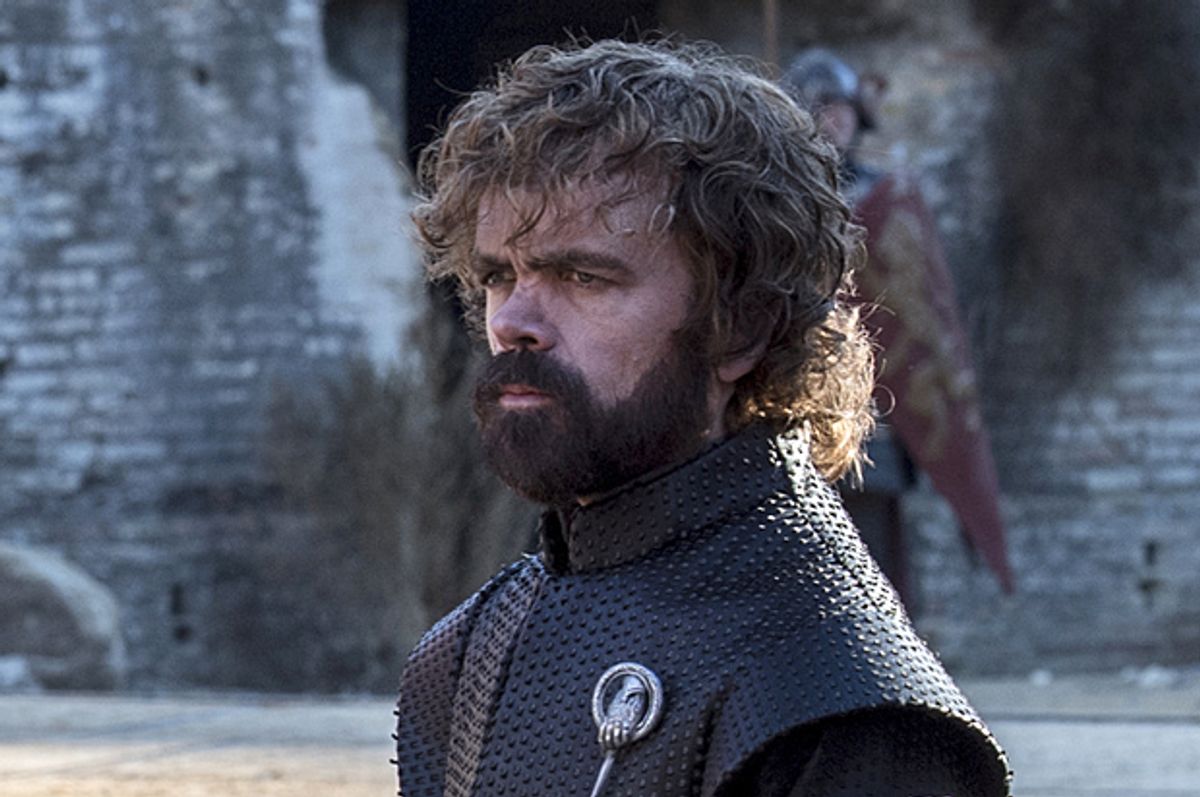 Peter Dinklage in "Game of Thrones" (HBO/Macall B. Polay)
--

The text below contains more than a few spoilers from the season 7 finale of "Game of Thrones." Read at your own peril.

Many have noted that the season 7 finale of HBO's "Game of Thrones," "The Dragon and the Wolf," cast somewhat of a curious, mysterious pall over the behavior of protagonist Tyrion Lannister (Peter Dinklage). Specifically, as Jon Snow (Kit Harington) and Daenerys Targaryen (Emilia Clarke) consummated their not-so-secretly incestuous love, Tyrion stood in a darkened hallway outside of his queen's bedchamber, staring extra, extra pensively at the door.

In a show where practically every scene is packed with future relevance and, even if it's not, scores of fans and websites spool out umpteen guesses about its meaning for the series, the quick, wordless moment captured the imaginations of many. Was Tyrion pensive because he had been lured into a wicked conspiracy with his sister Cersei (Lena Headey) against the aunt-nephew couple? Was he concerned the coupling might create a child? Was he looking extra dour because, much like Jorah Mormont (Iain Glen) before him, he was secretly in love with the Mother of Dragons?

With much emoted but nothing said, it was perfectly fair for watchers to theorize about possible jealousy and betrayal in such ways.

Well, the director of the episode, "Game of Thrones," veteran Jeremy Podeswa, seems to have just taken out a long needle and popped all those mind bubbles in an interview with the Daily Beast.

When writer Melissa Leon asked Podeswa straight up if the audience was supposed take Tyrion's stare as a sign of jealousy, the director responded. "Well I think there’s jealousy, but it’s maybe not romantic jealousy, in the way that it is for Jorah, for example." He added "I think that for Tyrion, it’s more complicated. I think he has a very special relationship with Dany and he really believes in her as a true leader and has invested a lot in her."

In actuality, none of this is about gushy feelings of love, but Tyrion's role as Daenerys' Hand and most trusted advisor. Podeswa says "With Jon and Dany getting together, this represents a possible undermining of his position with her and also a monkey wrench thrown into what the master plan really is meant to be around this entire alliance." He continues "The way I see it is Tyrion is a bit of a strategist — not just a bit of a strategist, he is a major strategist — and I think now, he can’t see where this is gonna go and that’s very difficult for someone who is always thinking three steps ahead. The consequences of Dany and Jon getting together are completely unknown."

This take actually underlines a lot of what we've seen this season. Throughout, Tyrion offered Daenerys advice, often to see it brushed off (in particular, she immolated the Tarlys against his wishes and flew off to save Jon beyond the wall against his warnings). At the times she did happen to follow his counsel, it was often because Jon had subsequently suggested the same advice. Overall, it's clear that Tyrion is loosing influence over a queen who has pointed out when several of his suggested strategies ended in military failures. It's only natural for him to be concerned about the future as he loses his grip on power.

Now, that doesn't mean Tyrion won't betray Daenerys with Cersei, it just means that it isn't in the works yet. As Podeswa says, Tyrion may find himself on the other side of the coin from Daenerys in the future. "I think the worry for him is that now, everything is up for grabs," he notes. "We don’t really know who’s going to side with who, what’s gonna happen at the end of the day, and which alliances are going to be the strongest."

And, so, the Game of Thrones continues to be played, just without another subject crushing on his queen.