Covering natural disasters properly is hard, but shoving a mic at a shivering mom is not it 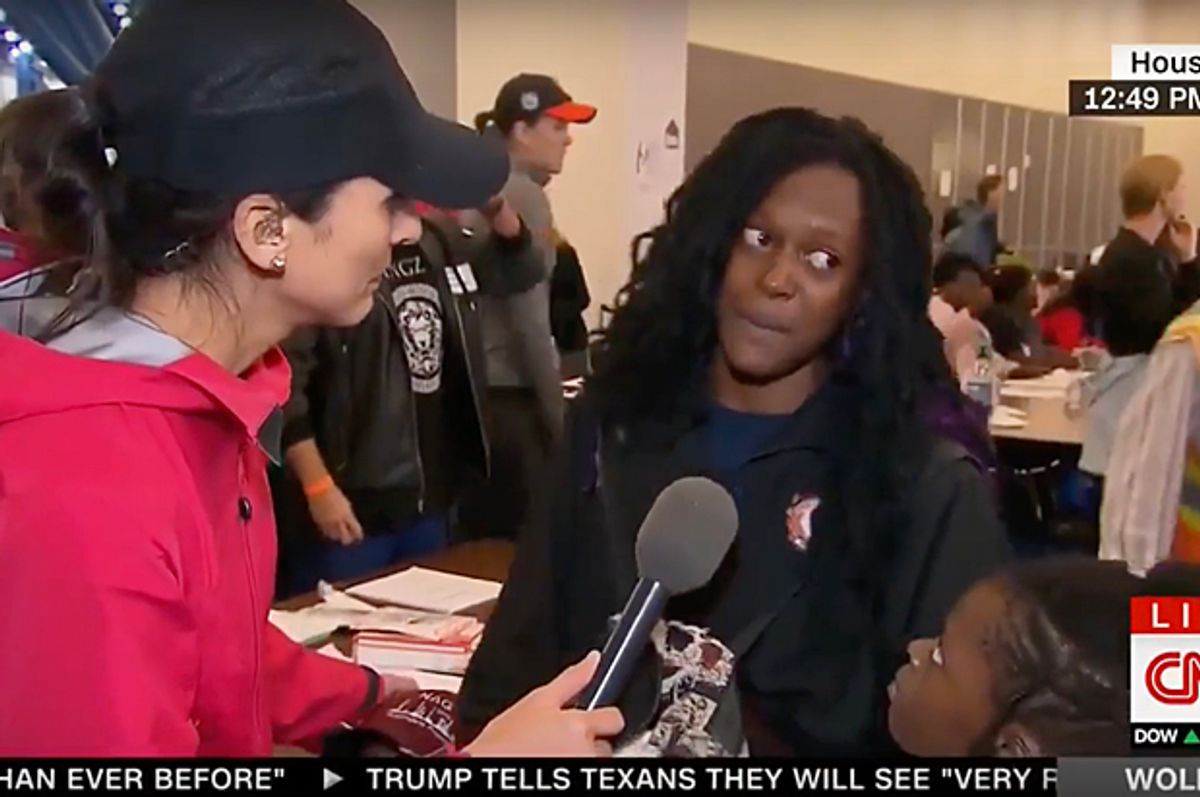 A CNN interview of a Hurricane Harvey survivor in Houston conducted by reporter Rosa Flores went viral yesterday, and not without good reason.

The woman identified only "Danielle" and her daughter appeared shivering and emotionally shaken as  she told Flores she had been waiting for police for around 36 hours "and they never came." She continued, "we had been there like five days with no food, no lights, and nobody came."

Danielle was clearly distraught, devastated and exhausted as her daughter clung close to her side. By the reporter's own words, the mother and daughter had just arrived to shelter. But Flores pushed further, asking Danielle just how she saved her child.

"We walked through four feet of water to go get food on the first day," she said with clear frustration. "Yeah, that's a lot of shit. But y'all sitting here trying to interview people during their worst times. That's not the smartest thing to do."

The two backed away from each other immediately after the exchange.

While heated, Danielle's words are both completely understandable, relatable and perhaps justified. She, by her own account, had been through a harrowing experience only to meet a reporter who, to her, was seeking not connection but 30 seconds of soundbites (at no point did Flores ask if Danielle or her daughter could use a blanket or even if they were okay). Being reduced to grist for the cable news-cycle mill may not be welcome when you're just trying to survive.

And still, some outlets called Danielle "furious mother". Others accused her of "lashing out". It's a trend that underlines a certain lack of empathy and unnecessary defensiveness on the part of the media, particularly toward those reeling from a crisis that so many in Houston know is far from over. It helps no one to shame victims for calling out the disaster tourism and ratings seeking inherent in coverage of such events.

A different side of CNN was shown this morning, as another correspondent stopped coverage to rescue a man from a sinking truck. But still, the network interviewed him after pulling the survivor to his feet. It was, almost unavoidable, heroism and humanity packaged for ratings.

Granted, it's hard for news organizations to walk line between reportage and exploitation. Outlets are duty bound to cover natural disasters and amplify the human stories of people on the ground. But doing so ethically, empathetically and humanely is just as crucial. Sometimes, we in the press deserve to a good push when we forget that.