Season 4 proves yet again why this cartoon is one of the most realistic, honest portrayals of being human 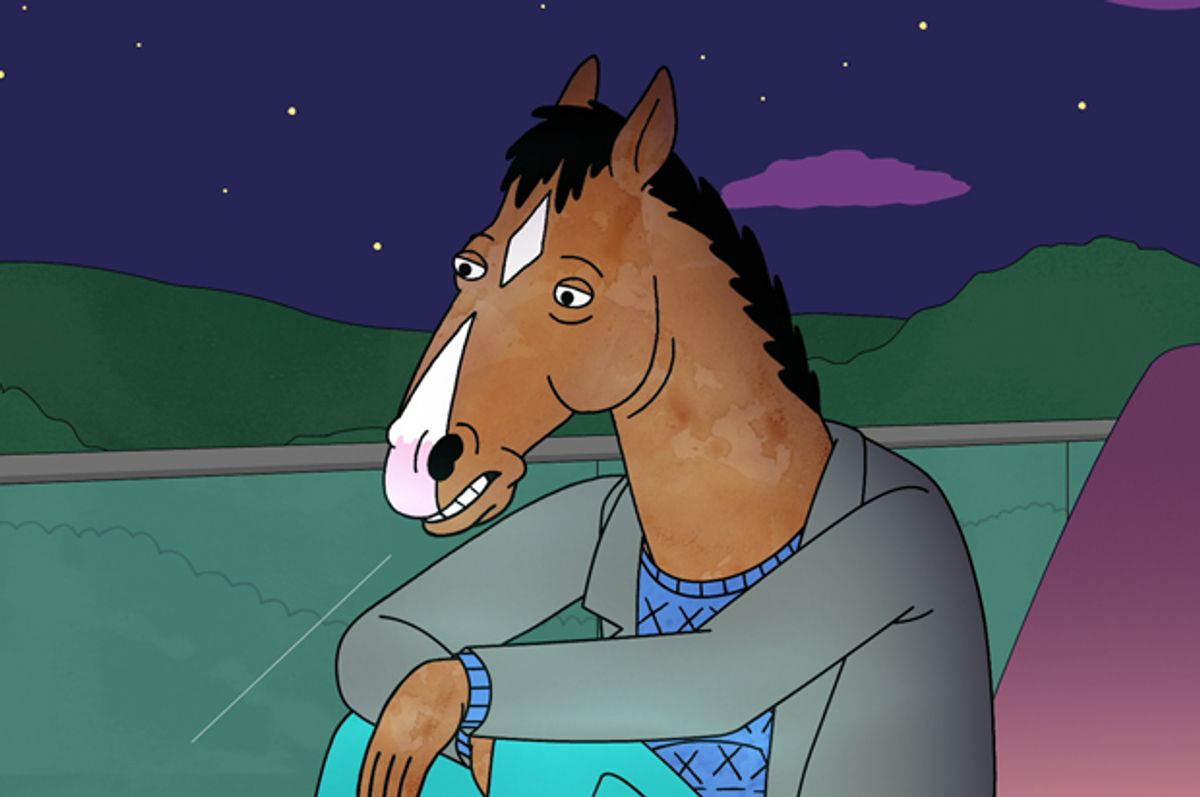 BoJack Horseman's celebrity lair is a visual metaphor, the sort of hyper-modern ostentatious cube designed to flaunt wealth and status. But at the end of the day, the span of which is covered in the opening credits for Netflix's "BoJack Horseman," it's still a gigantic, fancy box that he wakes up inside of alone, more or less, every morning. And the entire house is precariously set on the side of a cliff supported by nothing but a few load bearing stilts.

All it would take for it to come crashing down is a disaster of sufficient force.

"BoJack Horseman" returns for a fourth season on Sept. 8, and continues its practice of blurring the difference between cartoon and animated series. Semantically speaking these are interchangeable terms, and yet this show demonstrates the difference between the two. Cartoons are generally rubbery, gag-driven diversions not beholden to laws of physics or logic. Anvils drop from the sky to crush devious coyotes or tomcats who emerge alive, if bandaged and on crutches, in the next frame, ready to build better mousetraps.

The world of "BoJack Horseman" is undeniably cartoonish, and this can trick the unsuspecting viewer into getting stuck on this show, unable to pull away. You may think you're digging into a bowl of frothy sweet, which it is for a few episodes during the first season.

Soon enough the rough grains hiding in the cream grow prominent, as the series integrates unsparing examinations of depression, the weight of history and memory, and the inter-generational impact of family dysfunction into its narrative. The superior "BoJack Horseman" looks and operates like a cartoon, with walking, talking animals living alongside humans, holding jobs, paying taxes and obsessing over the point of it all.

But it's really an extended exploration of the ways that people, human and otherwise, damage each other, and a hard look at what emerges on the other side of that damage. It's an animated mixture of comedy and tragedy in which the hero is aware and deeply afraid that his house, is life, is falling off that cliff.

A person doesn't binge "BoJack Horseman" to escape. Nope, you do it to relate, to find security in the knowledge that everyone wrestles with an inky black shadow self. "BoJack" provides flesh and blood with assurance that all of us internalize our scars. Without spoiling anything, let's just say that the sixth episode of this new season illustrates this truth with agonizing clarity.

Witnessing these tiny disasters play out in the life of a man who, as the end credits theme song goes, is more horse than a man, and  more man than a horse, somehow makes the grimmer stuff more palatable. BoJack, the faded star of the 90s hit sitcom-within-the-show "Horsin' Around," is a substance-abusing, womanizing, egocentric, short-tempered ball of self-loathing. Only occasionally is he made to answer for the shoddy way he treats the people in his life, including his friend Diane Nguyen (Alison Brie), his ex-girlfriend, and occasional agent/business manager Princess Carolyn (Amy Sedaris) and his lackey Todd (Aaron Paul).

At this point, his friends consider BoJack to be a fascinating, occasionally aggravating distraction. Diane is figuring out how to develop her writing career and escape the long shadow cast by her eternally upbeat dog husband Mr. Peanutbutter (Paul F. Tompkins), who is running for governor. Princess Carolyn is determined to conquer her career and personal life. Todd is still trying to figure out who Todd is, functioning as the show's closest approximation to pure comic relief.

All of them tolerate BoJack because beneath his bluster lurks an intensely vulnerable soul seeking to find in fame what he didn't receive from his parents or a string of lovers and partners who believed in him. For the most part BoJack tamps down his immobilizing sense of inadequacy by galloping toward projects that he believes will fill the expanding chasm within him. First it's a memoir, then a passion project — a theatrical feature based on a life of Secretariat — that sends him on a draining steeple chase through awards season, enabling him to run from his troubles.

In this new season he has no offers waiting for him, and he's missing in action. But he carries his demons with him, and there's no outrunning those.  "You should give up on looking for enough," he advises a similarly flailing character, "because it will never be enough.

"BoJack" creator Raphael Bob-Waksberg and artist Lisa Hanawalt aren't expressly aiming for the pain here. Rather, it presents itself as an inevitable result of living, especially in Hollywood, a town divorced enough from reality to sell the illusion that fame and money define a person's worth, and success requires prioritizing the hunt for the next step upward above all else, including common sense, empathy and humanity.

The asinine, artificial nature of the entertainment industry enables Bob-Waksberg to wrap the difficult parts of "BoJack" in enough daftness to keep its energy upbeat, even in fundamentally bleak scenes.  And this season has its share those, specifically delivered in episodes that challenge the viewer's sense of perspective and shuffle together stories from separate eras and recollections.

The fourth season of "BoJack Horseman" returns to the show's deep bench of celebrity guest voices while also introducing Felicity Huffman, Zach Braff and Vincent D'Onofrio to the proceedings, allowing them lampoon themselves (D'Onofrio's appearance is brief but sufficiently bizarre to warrant calling out). Other new characters are voiced by Aparna Nancherla, Matthew Broderick, Sharon Horgan, Andre Braugher and RuPaul.

To be more specific about any of their roles would ruin the surprise of encountering them. I will say that some of these cameos inject a necessary dose of levity in to what is the show's most mercilessly truthful set of episodes to date, as BoJack confronts his frailties with a plaintive frankness (Fair warning to viewers experiencing a certain type of loss: the penultimate episode of this new season is shattering).

Similarly Diane, Mr. Peanutbutter and Princess Carolyn smash against their limitations in ways that anodyne distractions cannot camouflage, allowing Bob-Waksberg to make them nearly as central to the narrative as BoJack.

Nevertheless, these new "BoJack Horseman" episodes still combine the right proportions of sad booze and happy booze to maintain the show's equilibrium and keep it solidly within the ranks of worthwhile, viewing. How to characterize it is up to the individual. Wacky cartoon, dramatic, raw illustration, "BoJack Horseman" is a bit for each. Above all it's a show about life, drawn with honesty.