Neoliberal capitalism helped make the devastation in Houston possible, and now it will profit from the aftermath 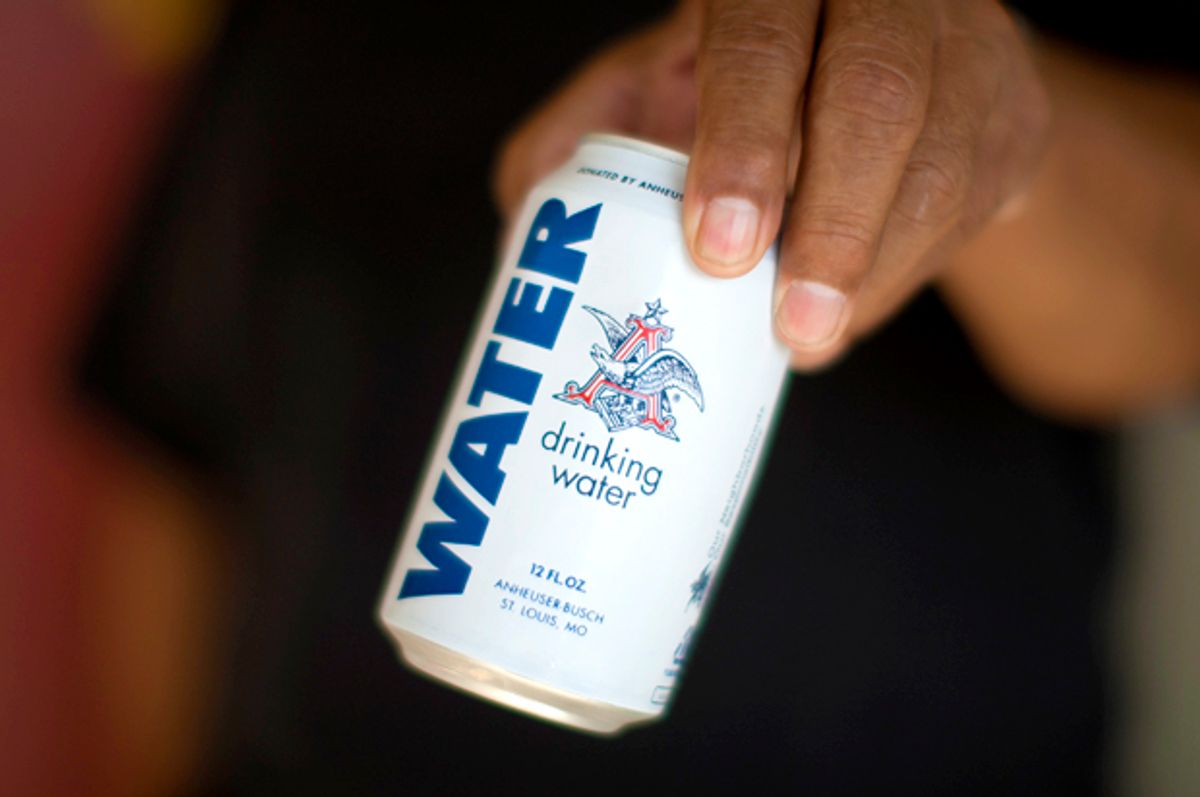 A can of water donated by Anheuser-Busch in California during a drought. Currently, Anheuser-Busch is sending more than 155,000 cans of water for Hurricane Harvey aid. (Getty/David McNew)
--

Capitalism has been described as "creative destruction." In the worst case scenario, it is human beings who are destroyed. The market does not care. Profits over people is the true "golden rule," and the "invisible hand" is at work in its most cruel form.

Hurricane Harvey and its horrific aftermath will be an exercise in disaster capitalism. (Yes, it's a tropical storm now, but made landfall as a severe hurricane.)

Harvey and its aftermath offer an opportunity for gangster capitalists to further undermine the commons and the public square. Harvey has created a stage on which the profiteers and price-gougers will take advantage of a desperate public.

Harvey and its aftermath also offer an example of what can happen when Donald Trump and the Republican Party's desire to destroy the infrastructure and legitimacy of government are applied to a national disaster. What follows will be a spectacle of greed and incompetence.

Harvey and its aftermath will also demonstrate how neoliberal policy elites help create a crisis which they in turn propose to solve through "innovative," "free-market" solutions -- most of which do not work.

Investor's Business Daily, a site that expends most of its energy tracking the financial markets, published an unsigned editorial this week under the headline "Harvey's Wrath Reveals the Blessing of Liberty." (I suppose they got some pushback on that one, since it has since been changed to "If You're Focused on the Government's Response to Harvey, You're Looking in the Wrong Direction.") As you would expect, it's pro-business propaganda, depicting large corporations as kindly souls and public-spirited friends of the people, rather than self-interested, rapacious and often destructive entities.

Of course, Investors Business Daily -- like the corporate news media in general, is not likely to explain how unregulated free markets and unrestrained capitalism greatly worsened the impact of Hurricane Harvey.

Houston is America's fourth largest city. Its zoning laws are largely nonexistent. Many of the city's neighborhoods were constructed at or below the flood plain. Basic common-sense rules and guidelines about designing building codes and infrastructure that could survive severe flooding have been overruled in favor of unregulated growth of. This has been a dream come true for the rich and for real estate entrepreneurs. But it is now a nightmare made real for Houston, as oil and chemical facilities sit close to residential communities and the people are potentially being poisoned by toxic flood waters and air.

Global warming has exacerbated the likelihood of extreme weather events such as Harvey. Corporations such as ExxonMobil -- formerly the employer of Secretary of State Rex Tillerson -- have long known about the dangers posed by climate change, but they chose to conduct a propaganda campaign that systematically sought to mislead the public about such risks. Many of these same oil and petrochemical corporations earn billions of dollars a year from the Houston area and the adjacent Gulf of Mexico.

Numerous corporations will no doubt descend on Houston and its surrounding areas, winning publicly financed contracts to rebuild the area, while paying little if any taxes on their profits.

That editorial in Investors Business Daily serves as a valuable signal about how the narrative around the tragedy in Houston is being shaped by the mainstream news media. Harvey coverage is now focused on human drama and feel-good stories about people helping each other, showing how rugged individualism and charity can complement the publicly-funded first responders.

The narrative frame will then begin to focus on looters and crime. As we saw during Hurricane Katrina, the color line hovers over every area of American life, even its natural disasters. Black and brown folks searching for supplies will likely be described as "looters," while white folks doing the same thing are "finding" food and water. There will then be the obligatory questions of "Why didn't those people leave? why didn't they evacuate?" Besides the obvious answer -- local authorities told people in Houston not to evacuate -- many of the 18 percent of the city's population who live below the poverty line do not have the money, transportation or other resources to leave easily.

There is an another troubling dimension to the Harvey disaster that few observers have considered. The rebuilding of Houston and the surrounding community will provide an opportunity for Donald Trump to appear "presidential" by funneling hundreds of billions of dollars into the cleanup and construction effort. This could be an opening for Trump to leverage the "economic populism" he promised to his angry racist voters during the 2016 campaign. Such a move would only further cement his cult-like hold on his base of supporters. Writing at Alternet, Gerald Epstein explains the dangers of Trump's pseudo-populism:

Let this be a warning to economists, labor leaders, Democratic officials and all progressives fighting for economic and social justice: “progressive-appearing” economic proposals from Trump are likely to be thinly veiled attempts to suck in unsuspecting allies in support of a neo-fascist, authoritarian movement that is increasingly showing its true colors. They are designed, quite clearly, to build support for Trump and his business allies. Don’t be fooled, don’t be bought off, and be vigilant.

Donald Trump's presidency is a national emergency. When combined with the natural disaster of Harvey, the result could be a perfect storm for Trump to realize his American nightmare.