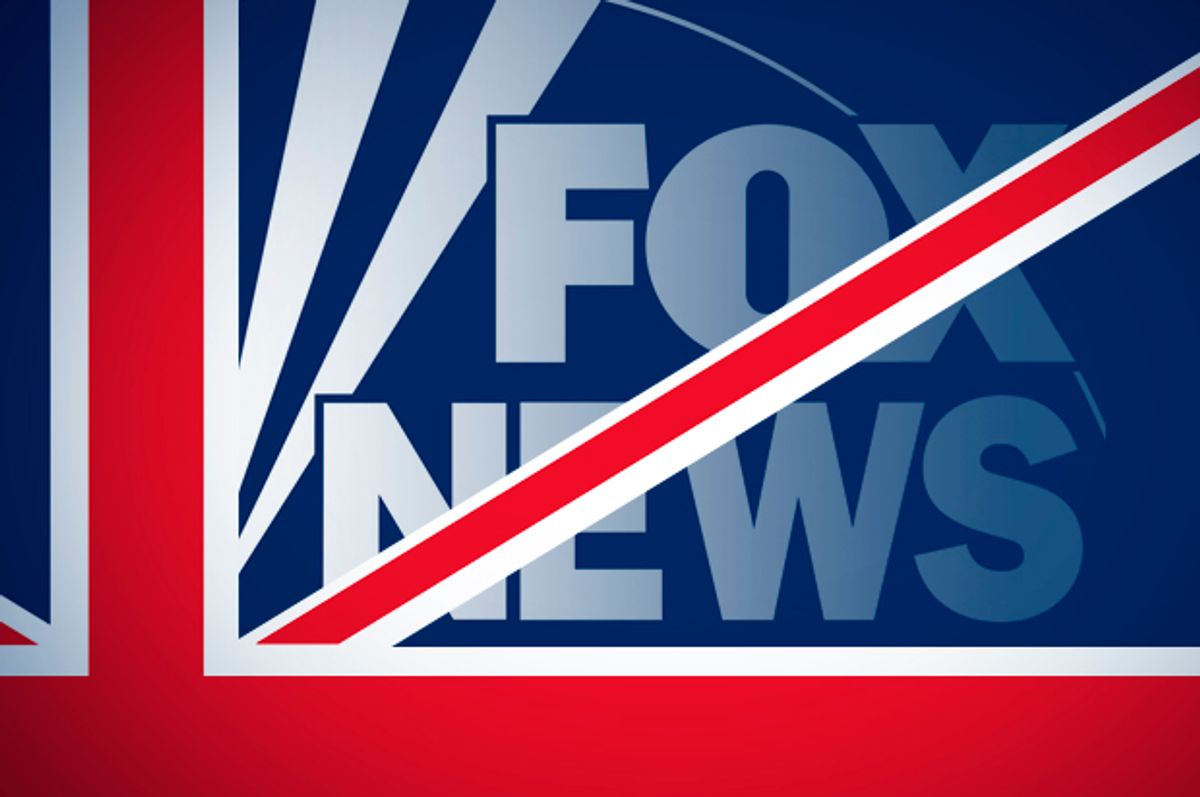 British fans of Fox News Channel -- what few there are -- were disappointed this week when its parent company 21st Century Fox announced that it would no longer transmit the American news outfit’s signal to subscribers of its Sky television service.

Officially, the reason given for Fox News’ cancellation in the UK was that its ratings were poor. In a statement released to the media on Tuesday, the parent company (which calls itself 21CF for short) said that “only a few thousand viewers” were tuning in.

“21CF has decided to cease providing a feed of Fox News Channel in the UK,” the statement said. “Fox News is focused on the US market and designed for a US audience and, accordingly, it averages only a few thousand viewers across the day in the UK.  We have concluded that it is not in our commercial interest to continue providing Fox News in the UK.” (Frank Radice, Salon's London bureau chief, discusses Fox News' British problems in the video interview attached to this story.)

On background, representatives of the Rupert Murdoch-owned company have stated that Fox News received around 2,000 viewers across the entire daytime schedule. Numbers swelled to around 60,000 for certain shows, according to data collected by the Broadcaster's Audience Research Board (Barb), Britain’s equivalent of Nielsen Media Research. By comparison, 21CF’s Sky News channel has a daily reach of about 1.6 million according to Barb. BBC News reaches about 2.5 million viewers.

While Fox News’ ratings were far from spectacular, 21CF was interested in keeping it on UK television and even agreed to alter the channel’s content at the request of Ofcom, the British regulatory agency analogous to the Federal Communications Commission, but with much broader powers. Under U.S. law, the FCC is essentially not allowed to govern paid subscription television channels. In Britain, all television channels are subject to content oversight, including restrictions on impartiality and accuracy.

During its time on British television, Fox News had run afoul of Ofcom’s Broadcasting Code multiple times, creating headaches for Murdoch and his sons Lachlan and James (both executives at 21CF), who are currently seeking British government approval to purchase full ownership of Sky. In the past 10 years, Fox News was found in breach of Ofcom regulations 22 separate times, including last year when it discussed the “Brexit” issue while the British public was voting on the matter. In 2015, Ofcom cited a claim by a Fox News guest that the city of Birmingham in central England was “totally Muslim” and that non-Muslims were unwelcome there as “materially misleading.” (According to the British census, the population of Birmingham is roughly 22 percent Muslim.) Fox News and its parent company profusely apologized for the segment and retracted the claim after it aired.

Fox News and 21CF’s other operations have been under heightened scrutiny from Ofcom as well as from Britain’s culture minister Karen Bradley. Both have been evaluating whether 21CF should be allowed to complete its Sky acquisition. In June, Ofcom ruled that 21CF would be a “fit and proper” owner for Sky, a judgment that was condemned by Murdoch critics, particularly by the left-leaning group Avaaz. Earlier this month, the organization said that it would seek legal means to force Ofcom to reconsider its judgment.

"Ofcom’s made mistake after mistake in deciding to give the Murdochs a clean bill of health to take over more of our media,” Alex Wilks, a campaign director at Avaaz, said in a statement announcing a formal filing. “They need to reopen their investigation to regain credibility.”

Trying to gain favor with British authorities, 21CF has made numerous changes to its operations, particularly in regards to employee relations after a series of sexual harassment scandals which led to the firing of several top Fox News executives and hosts, including longtime host Bill O'Reilly and founding chairman Roger Ailes. The latter was revealed in April as having set up an elaborate network of fake websites which used degrading sexual imagery to promote female correspondents and anchors.

In a May 15 regulatory filing, 21CF told Ofcom that it would agree to place stricter editorial controls on Fox News content in order to better comply with the agency’s Broadcasting Code. The shakeups and changes in editorial practices have begun to grate on some loyal American fans of the channel, many of whom perceive Fox News as having moved toward the political center after the departure of Ailes, a staunchly conservative Republican.

“During the course of our investigation of the proposed transaction, we found that Fox had not put in place adequate procedures to ensure the compliance of Fox News with the Broadcasting Code,” Ofcom wrote in its formal ruling declaring 21CF “fit and proper” to purchase Sky. “We wrote to Fox to express our concerns. Fox has now supplied us with details of new compliance arrangements introduced on 15 May 2017. We consider that the improvements made by Fox to its compliance arrangements and procedures are sufficient to meet the requirements of its license.”

A spokeswoman for 21CF told Salon the company would not comment on the specifics of Fox News Channel's compliance agreement with British authorities.

Asked about what sorts of promises 21CF had made in regards to Fox News, an Ofcom representative said the agency was not allowed to provide details.

“While we can confirm this is information we hold, it is information provided to Ofcom by a stakeholder as part of us carrying out our regulatory functions, and we are not able to disclose it publicly,” Tony Finnegan, senior communications manager at the agency, told Salon in an email.

According to a source familiar with the situation, the UK pullout of Fox News was not related to the Sky bid.

In addition to alienating some American fans, recent management and policy changes at Fox News have caused alarm among some of the channel’s more ardently Republican hosts. In April, host Sean Hannity claimed that ousting longtime Fox News executive Bill Shine would be “the total end of the FNC as we know it.” Within days, Shine parted ways with the company.

Earlier this year, Hannity's editorial standards came under intense scrutiny within 21CF, according to multiple sources. Of particular concern was his zeal for pursuing allegations that Seth Rich, a former staffer for the Democratic National Committee, was murdered for providing stolen emails from party officials to WikiLeaks. Fox News had run a story on its website about the matter which has since been retracted. The channel is facing a private lawsuit as a result of the pulled report.

Since the departure of Ailes and O’Reilly, several other right-wing media organizations have been trying to crowd in on Fox News’ traditional audience, including Newsmax TV and One America News. The Sinclair Broadcast Group, an owner of numerous US-based broadcast television stations, has also been discussed as a potential Fox News competitor. Sinclair has denied that it wants to start a cable news operation.

This article originally stated that Birmingham was in northern England. In fact, it is in central England.