Trump's decision on equal pay is about more than Ivanka's hypocrisy

It's not just that Ivanka is clueless about equal pay. The Trump administration is actively undermining women 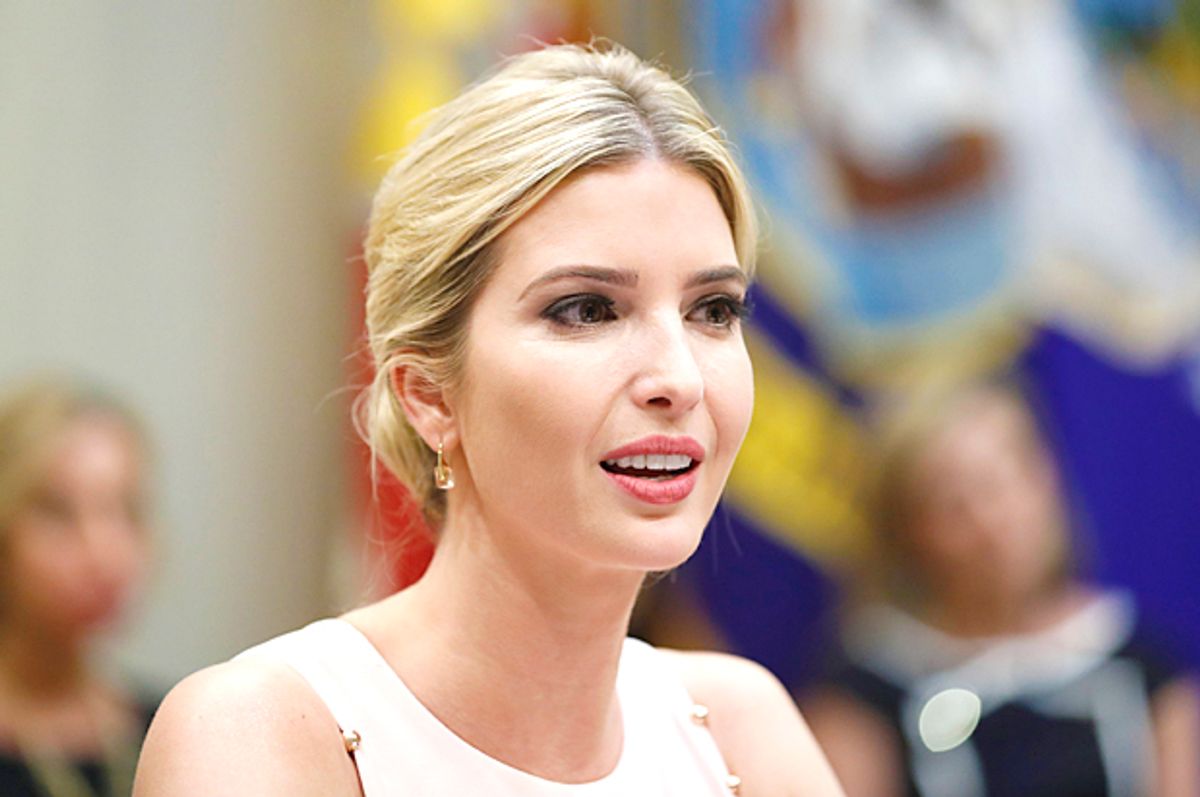 The Trump administration recently announced plans to halt the implementation of an Obama-era rule that requires employers with more than 100 workers to submit employee pay data, broken down by race and gender, to the Equal Employment Opportunity Commission (EEOC). This decision has attracted headlines as further proof that Ivanka Trump, who defended the move, is a hypocrite who pretends to support working women but who can't be bothered to actually help them. But a deeper look at this decision reveals that the story is even more bizarre than that. It underscores that the Trump administration is not just indifferent to civil rights issues, but openly hostile to any moves that might make life more fair for women and people of color.

The official reason for this decision is that the regulation in question is "enormously burdensome" and ineffective. Ivanka Trump backed up this excuse by arguing that "the proposed policy would not yield the intended results" and claiming that she supports "robust policies aimed at eliminating the gender wage gap."

All of this is complete nonsense. There's no reason to think the EEOC rule was either ineffectual or burdensome to employers.

As Fatima Goss Graves, president and CEO of the National Women's Law Center, explained to Salon, the Obama administration did years of work trying to figure out the level of burden to employers and ultimately created a system that would collect the necessary information "using data that employers are already required under the law to maintain and collect."

Many in the business community criticized the policy because they worried that the data collected would oversimplify the issue of pay disparities between men and women, but even they could not argue that it was particularly burdensome to collect the data. Employers already fill out the EEO-1, which collects data on the race and gender of employees. The change just requires adding compensation information.

This is necessary because without such a rule there's no systematic way to look at whether employers are paying people differently by race and gender. Most employers keep that information under wraps, and the few legal challenges there are regarding equal pay tend to start by happenstance — employees accidentally see an H.R. document or find out each other's salaries during after-hours conversation.

It's also important to understand that this rule was primarily intended as a preventive measure, not as some kind of trap to ensnare employers.

“The goal of this pay rule is to have employers do an audit, understand their pay problems and fix it," explained Goss Graves. "In doing that, that allows for a bit more sunlight on a problem that is typically in the dark, but also allows for employers to do some self-correcting.”

No doubt, many employers are concerned that exposing this information and collecting it in a government-run database opens them up to legal challenges and complaints. But that's the wrong way to look at this situation. In reality, being forced to audit their wage practices could go a long way towards preventing EEOC complaints and lawsuits by addressing the core causes that makes them possible.

“The best way for an employer to prevent a lawsuit is to pay their employees right the first time," Goss Graves said. “Employers who don’t think they should pay their employees fairly probably should be sued, because clearly they aren’t drawn by other notions of accountability. But I think most employers want to do the right thing. This is the sort of rule that will prompt them to take the steps to ensure they are paying their workers fairly.”

As for the idea that this rule was ineffective, there's no real evidence for that. No one, Goss Graves argued, thinks this rule is the end-all, be-all for fighting unequal pay in our society. Much of the wage gap goes back to larger systemic issues regarding what kinds of educational and employment opportunities different people get in the first place. Conservatives often try to frame this question as a matter of "choice" issue, claiming or implying that women make less because they "choose" lower-paying fields.

But research shows that pay discrimination in the workforce continues to be a problem. As Claire Cain Miller of The New York Times wrote in 2014, "a majority of the pay gap between men and women actually comes from differences within occupations, not between them — and widens in the highest-paying ones like business, law and medicine."

Even controlling for age, race, hours and education, female doctors only earn 71 percent of what their male counterparts do. Female lawyers and judges earn 82 percent of what men in the same jobs do. Even computer programming, a job women are frequently instructed to take up if they want to make man-levels of money, has a pay gap, with women earning 90 cents to every male dollar.

So no one thinks that pressuring employers to be honest with themselves about what they're paying their employees will fix the entire problem. But it can go a long way towards making sure employers aren't systematically paying women less than men, for doing the same work.

The Obama-era rule is neither burdensome nor ineffectual and may even be a help to employers in the long run. This choice is likely just another example of how the Trump administration is actively working to turn back the clock on social progress -- and undo anything and everything with Barack Obama's name on it. For Trump, making America "great again" is about undermining women and people of color for no other purpose than to preserve the privileged status of white men. Empty words from his daughter won't change that.