Cop says "We only kill black people" on camera: shocking, not surprising

A boast? A joke? Whatever Lt. Greg Abbott meant when he said "we only kill black people," the effect is the same 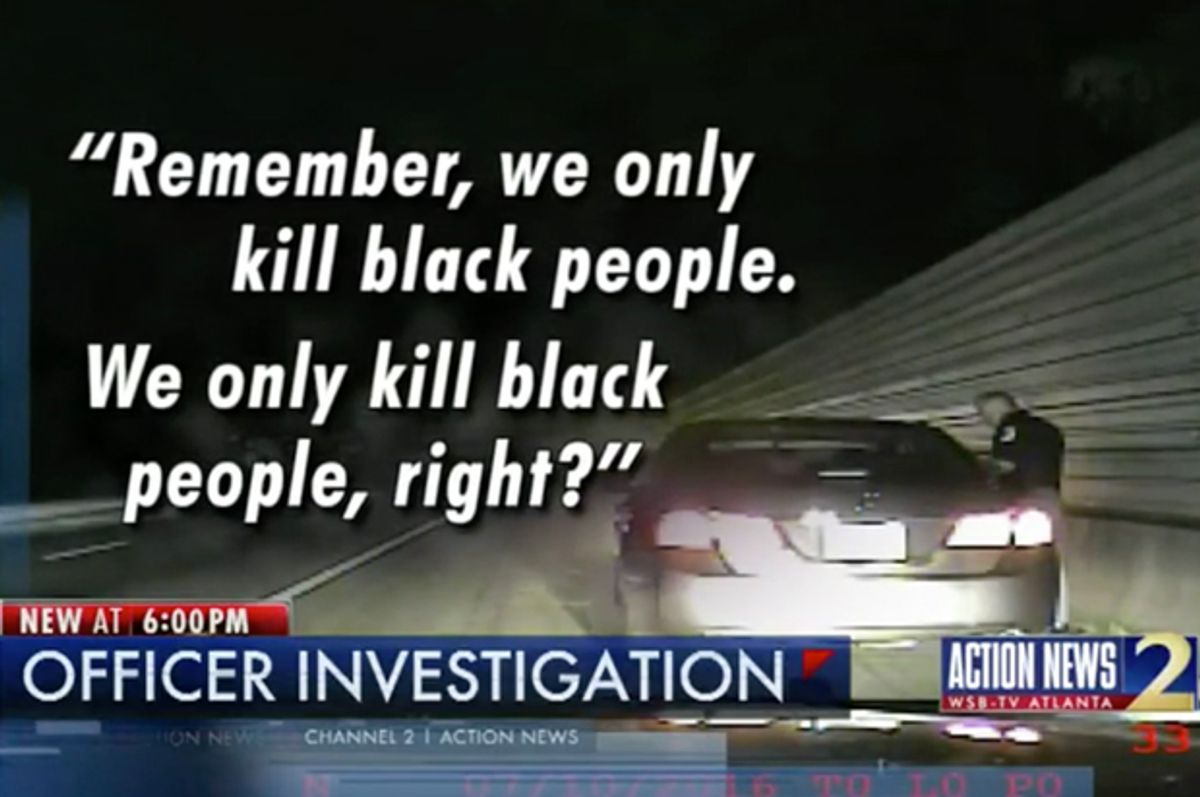 I feel like every poor, black neighborhood in America is trapped in a police state. Here, the cops don’t protect and serve — they enforce and terrorize.

It’s been like that before I was born, and I don’t see any changes coming in the foreseeable future. I’ve acknowledged this system for a long time. It's one of reasons I’m still alive. It's one of the reasons I’m rarely surprised by rouge police actions.

But every once in while, even I get shocked: the first time I watched Eric Garner scream “I can’t breathe!” on camera while receiving an illegal choke hold; seeing Michael Slager shoot Walter Scott in the back for no reason; reading about the amount of time the Ferguson Police Department left Michael Brown, a teenager that was headed to college, on the ground after he was shot in the head by Darren Wilson.

Now, we have Georgia.

Reports have come out that a police-cruiser dashcam captured a Cobb County officer, later identified as Lt. Greg Abbott, talking to a white suspect during a fairly routine DUI traffic stop.

On the video below, Abbott can be heard instructing the woman in the passenger seat to put her hands down. She responds in fear, "I’ve just seen way too many videos of cops . . . "

It’s bad enough that so many black families are suffering through tragedies created by police officers who are almost never held accountable for their actions. But how evil do you have to be to joke or brag about it? In this moment, Abbott shows no regard for human life . . . well, black human life.

According to Abbott’s attorney Lance LoRusso, his actions were nothing more than plain-ol' good policing. "[Abbot's] comments must be observed in their totality to understand their context," LoRusso said in a statement to The Washington Post. "He was attempting to de-escalate a situation involving an uncooperative passenger. In context, his comments were clearly aimed at attempting to gain compliance by using the passenger’s own statements and reasoning to avoid making an arrest."

If this joke of a statement by LoRusso is true, then how would Abbott de-escalate a similar incident with a black person? Oh yeah: shoot them.

I'm sure a collection of phony apologies from Abbott and the department will follow LoRusso’s statement. I’m sure that Abbot's sorry (not for saying what he said, but that we heard it). I'm sure that, despite the fact that police officers should be the main advocates for Abbott’s termination, cops in general won't call for his resignation.

All I'm hoping for here is that the "All cops aren’t bad!" people are paying attention: it's because of all-too-common interactions like this that we just don’t trust police.