Trump and the generals: Are Kelly, Mattis and McMaster keeping the tweeter-in-chief under wraps?

Some right-wingers fear a "deep state coup" in the White House. That won't happen, but maybe Trump's on a leash 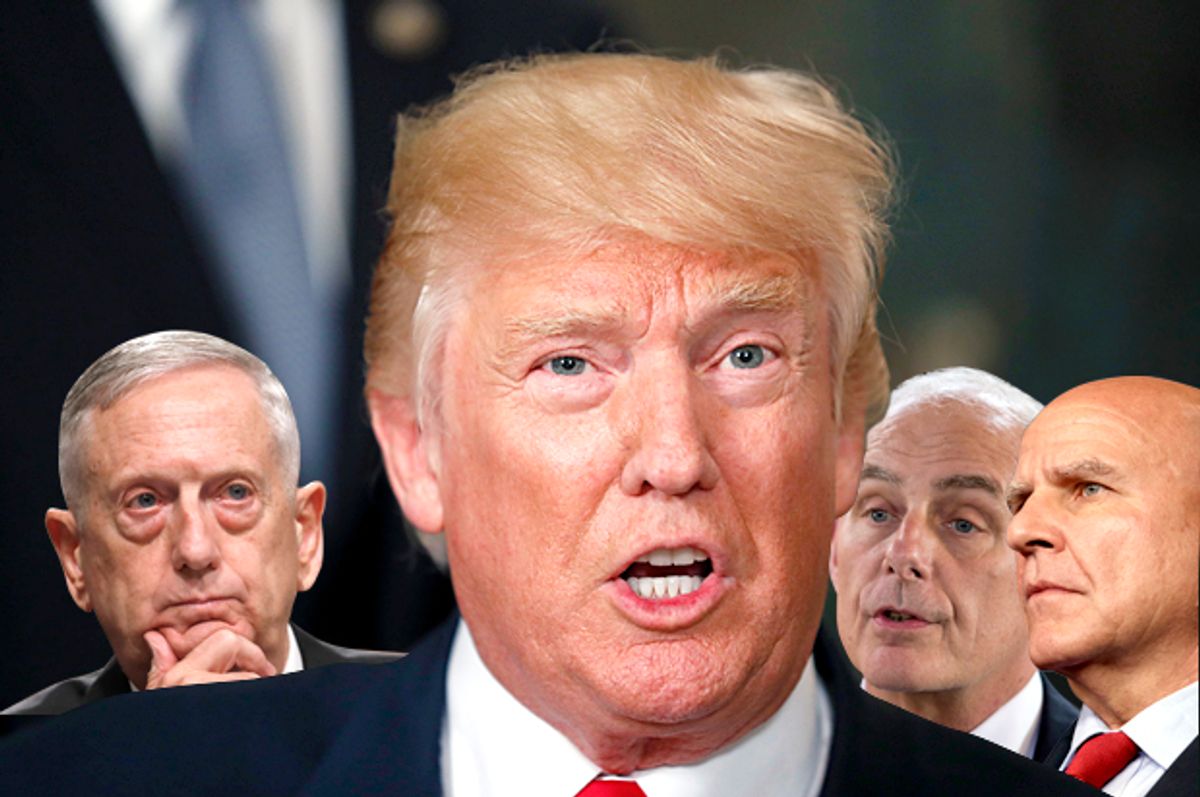 Mike Cernovich is a relatively well-known character among the ranks of white supremacists, also known as the “alt-right.” In addition to other crackpot ideas, Cernovich popularized the loony theory that Democratic operative John Podesta was engaged in a human trafficking ring out of a pizza shop in Washington. That has been long since debunked, of course. He also believes in an apparent genocide against white people and has suggested that the most recent chemical weapons attack in Syria was a hoax.

Adding to Cernovich’s roster of kooky pronouncements, Breitbart News recently reported that Cernovich believes there has been a military coup inside the White House and that President Donald Trump is being held under house arrest. Don’t get excited -- it’s clearly untrue. As tantalizing as that prospect may sound, there has been no coup.

I heard [John] Kelly had taken his [Trump’s] phone, so he wouldn’t be getting messages on his phone which again I thought was a weird story when people were telling me that I said, ‘come on, get out of here you can’t take the President’s phone this is incomprehensible’ but again that Bolton thing confirmed it and I’m not a big John Bolton fan personally, I don’t have anything against him but I found it amazing that he was, again, begging for retweets saying ‘the only way the President is gonna see my article is maybe if it goes viral,’ because it has to get past General Kelly, that shows there is some kind of coup going on there.

As much as we’d like to think Trump was somehow quietly removed from office, the prospect of a military coup, historically speaking, is more than a little terrifying. They never really turn out well for the people. For example, an attempted coup took place in Turkey last summer, around the time of the party conventions here in the U.S. As a consequence, around 113,000 journalists and dissidents have been rounded up by President Recep Tayyip Erdoğan, the Putin-style autocrat who is busily consolidating his power in Turkey with the support of both Trump and Putin. In fact, one of the clerics wanted by Erdoğan in connection with the coup is an American citizen living in the Poconos. Trump’s former national security adviser, Mike Flynn, allegedly conspired with Erdoğan to illegally extradite the cleric back to Turkey.

Nevertheless, while there doesn’t appear to be a coup underway in the United States -- and we should be grateful for that -- the three current or former generals surrounding Trump are either isolating the president or contradicting his orders or both. Short of an actual coup, this probably isn’t such a bad thing, given that Trump is obviously a destabilizing force inside the government, precipitating all kinds of damage to the system that won’t easily be repaired.

Trump’s secretary of defense, former Marine Gen. Jim “Mad Dog” Mattis, his chief of staff, former Marine Gen. John Kelly and his national security adviser, Gen. H.R. McMaster of the Army (the only one of the three still on active duty), have reportedly been working behind the scenes to backstop any Trump maneuvers that might further destabilize the executive branch. According to a recent article by The Washington Post’s Philip Rucker and Robert Costa:

Connected by their faith in order and global norms, these military leaders are rapidly consolidating power throughout the executive branch as they counsel a volatile president. Some establishment figures in both political parties view them as safeguards for the nation in a time of turbulence.

Former acting CIA director John McLaughlin told the Post: “This is the only time in modern presidential history when we’ve had a small number of people from the uniformed world hold this much influence over the chief executive.” He added, “They are right now playing an extraordinary role.”

Later, the president decided to rewrite America’s North Korea policy, completely at random and without explanation:

When reporters asked Mattis about the tweet, he replied, “We’re never out of diplomatic solutions.” Correct answer, but would the real president please step forward?

Throughout the past six months, we’ve observed numerous episodes out of the White House in which either Trump contradicted his staff or in which the president’s staff contradicted Trump. The most glaring example came when Trump blatantly denied everything his staff had said about the firing of former FBI Director James Comey, telling NBC’s Lester Holt that Comey was indeed fired in an attempt to shut down the Russia investigation. This week’s news, however, may have topped that.

Mattis has apparently exercised his latitude at the Pentagon to put at least a temporary halt on the president’s out-of-nowhere decision to ban transgender soldiers in the military. Anyone’s who’s been following along knows that Trump’s proclamations on Twitter have less to do with measured decision-making and much more to do with rubber-stamping the counsel of his secretaries of morning-zoo politics, Gens. Steve Doocy and Brian Kilmeade. The transgender policy was quite clearly one such snap decision based on the president’s daily "Fox & Friends" habit.

In a press statement, Mattis said, "Once the panel reports its recommendations and following my consultation with the secretary of Homeland Security, I will provide my advice to the president concerning implementation of his policy direction. In the interim, current policy with respect to currently serving members will remain in place."

This isn’t quite a full reversal of the policy, since the White House guidance gave Mattis the option of taking six months in which to study and implement the order. Based on this statement, though, it doesn’t appear as if Mattis seriously intends to take any near-term action, and given that there have been literally zero reported problems with currently serving transgender troops, we can safely assume (for now) that the ban will never see the light of day.

Gorka said Trump feels more isolated at the White House, and suggested he does not like all of the changes instituted by new chief of staff John Kelly, who has restricted access to the president as a means of bringing more discipline to the Oval Office.

This ought to be welcome news, given that Trump doesn’t appear to be as enabled as he once was by overzealous sycophants who, pre-Kelly, had free rein to influence the president with their pet agendas. Gorka was most definitely among them.

We’ve already witnessed screeching from Trumpers about an alleged “deep state coup.” As Trump continues to be isolated (reportedly), and as Robert Mueller’s trash compactor continues to squeeze the administration, it wouldn’t be much of a stretch for Trump to decide one morning, perhaps under the advice of Doocy and Kilmeade, that the Russia probe -- combined with the actions of Mattis, Kelly and McMaster -- constitutes a real-life “coup.” And no one puts baby in a corner. It would be a figment of Trump’s imagination, for sure. But it doesn’t have to be an actual coup for Trump to treat it like a real coup. Then, borrowing from his pal Erdoğan, Trump could very well arrest the generals, along with falsely accused “perps” in the intelligence community.

They say accidents happen due to a lack of imagination -- the inability to see what obstacles could suddenly pop up based upon surrounding conditions. It would make sense for the rest of us to keep our eyes wide open as Trump grows more embattled and his power more threatened. Recent history has proved over and over that he is capable of horrible deeds. Accusing both investigators and handlers of trying to criminally oust him is a real possibility. A cornered Trump could be a very dangerous Trump.

What Cernovich and Gorka may be telling us, in their own ass-backward fashion, is that putting the generals in their current posts might turn out to be the decisions that Trump regrets most. It seems as if Mattis, Kelly and McMaster, whatever we might think of their politics, may be the sentinels effectively blocking Trump from indulging his worst instincts.