Are Trump's generals on the verge of committing the biggest blunder of his presidency?

James Mattis is considering arming Ukraine — a strategy that's sure to backfire. 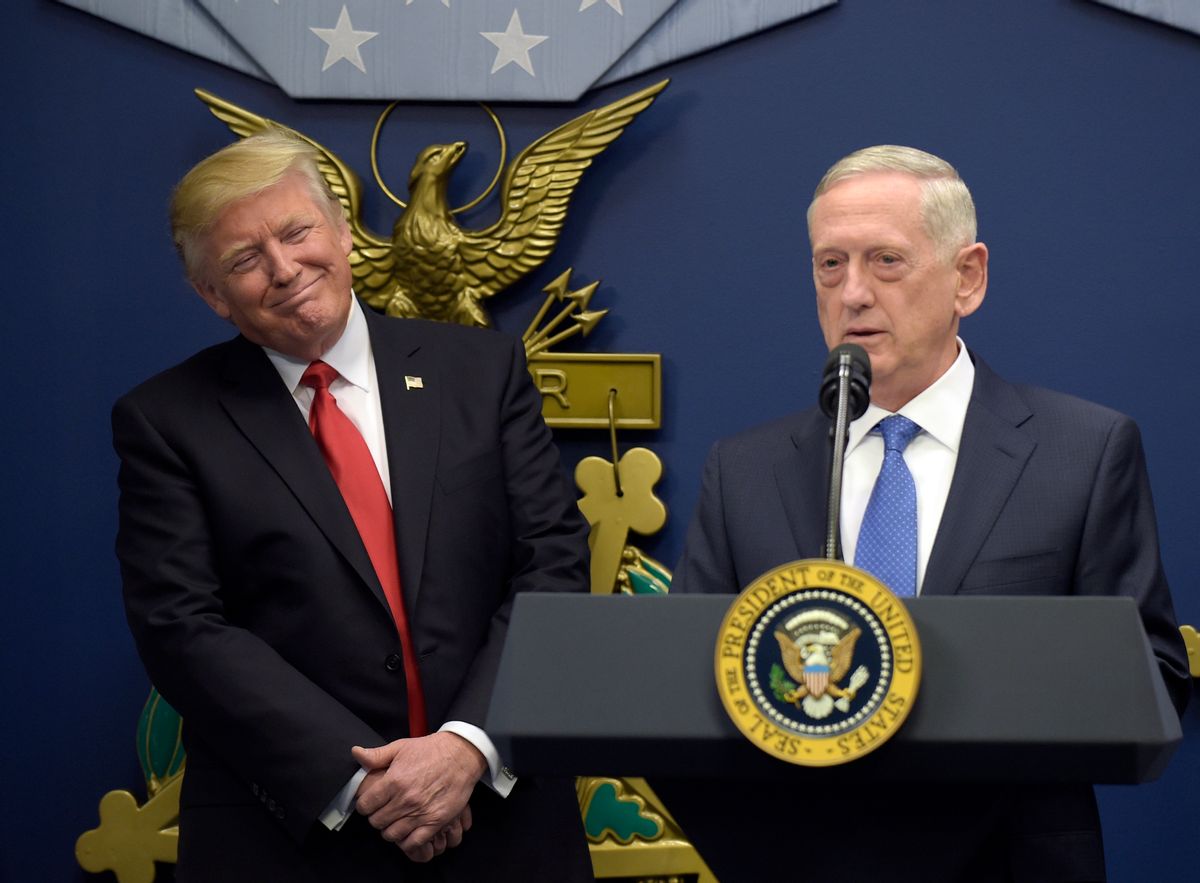 In this Jan. 27, 2017 photo, President Donald Trump, left, listens as Defense Secretary James Mattis, right, speaks at the Pentagon in Washington. With Republicans in charge of Congress, President Donald Trump’s pledge to boost the Pentagon’s budget by tens of billions of dollars should be a sure bet. It’s not. (AP Photo/Susan Walsh) (AP Photo/Susan Walsh)
--

Mattis, who visited Kiev last Thursday to mark the country’s independence from the Soviet Union in 1991, says he is only proposing that the U.S. send Ukraine “defensive” weapons, like Javelin anti-tank missiles, in order to counter the Russian-backed separatists who seized control over the Donbass region in eastern Ukraine in 2014. In a press conference with Ukrainian President Petro Poroshenko, Mattis insisted that “Defensive weapons are not provocative unless you are an aggressor, and clearly Ukraine is not an aggressor since it is their territory where the fighting is happening.”

But this reasoning is no less disingenuous than Russia’s longstanding claim that it does not have forces on the ground in Donbass. Weapons are weapons, and arming Ukraine would encourage an escalation of violence in what has basically settled into a frozen conflict. The original Brookings proposal to offer “lethal assistance” to Kiev, which broadly lays out the strategy endorsed by Mattis, argued otherwise. As the authors — notably including Michele Flournoy, who would have been a frontrunner for Mattis’ job had Hillary Clinton won the presidency — wrote at the time:

Some in the West are concerned that provision of military assistance, particularly of lethal arms, would cause Russia to escalate the crisis. We vehemently disagree. Russia has already continuously escalated: seizing and annexing Crimea, encouraging and aiding separatists in eastern Ukraine, providing the separatists with heavy arms, and ultimately invading the Donbas with regular Russian army units. [ . . . ] Enhanced military assistance would increase Kyiv’s capability to deter further Russian escalation.

Fortunately, the past two and a half years have proven them wrong. Obama rejected their advice, opting instead to respond to Russia’s aggressions with multilateral sanctions and military exercises in NATO allies such as the Baltic states, without direct military assistance to Ukraine, which is not a treaty ally of the U.S. And while localized violence has periodically flared in Donbass, there has been no further Russian escalation in Ukraine, nor in any other neighboring country. A major geopolitical crisis hasn’t been resolved, but it has been contained. Russia has not attempted to realize grandiose imperial ambitions across the region; instead, it has settled for the more modest objective of deterring further NATO expansion into the former Soviet space. Mattis is proposing what Obama refused to do, and would almost assuredly make a stable situation more volatile.

To be sure, Russia deserves a tough international response for its actions in Ukraine since 2014, in particular its illegal annexation of Crimea and its complicity in the tragic downing of a Malaysian commercial airliner over the Donbass. Moreover, as more details emerge in the ongoing investigation of Russia’s likely role in assisting the Trump campaign last year, additional sanctions could be justified. But sanctions can only be effective if Russia’s largest trading partners are on board, including, above all, Germany. And German Chancellor Angela Merkel has always opposed sending weapons to Ukraine. No representatives from Germany or France joined Mattis in Kiev last week, a signal of the limited appetite for a military confrontation with Russia. After all, it is Europe that would suffer the consequences, from pipeline disruptions to refugee resettlements.

The brief war between Russia and Georgia in 2008 offers a cautionary tale. Russian “peacekeepers” had occupied the territories of Abkhazia and South Ossetia since the Soviet breakup, but it was Georgia’s President Mikheil Saakashvili, unreasonably emboldened by the George W. Bush administration’s repeated signals that it hoped to integrate Georgia into NATO, who decided to resolve years of frozen conflict with a hot war. Even the hawkish Bush administration declined to intercede, and Georgia was swiftly defeated, with dire consequences for its strategic position and for Saakashvili’s political career. The U.S. must avoid signaling to Poroshenko that it is prepared to back Ukraine in a renewed war with Russia, because it absolutely is not.

This has likewise been demonstrated in Syria, where the U.S. role in arming rebels has only encouraged a larger Russian role on the ground and more bloodshed, and the upshot is that the Russian-backed regime of Bashar al-Assad is still securely in power. In Syria, Georgia and Ukraine, Washington policymakers have made the key error of deepening U.S. involvement in military conflicts where Russia is far more prepared to commit resources, and which it regards as far more crucial to its own security. The resulting violence is never sufficient to deter Russia, but still carries horrific consequences for the people the U.S. claims it is committed to helping.

All of these points applied under Obama, and would have applied had Clinton won (and there’s a very good chance she would have been more amenable to arming Ukraine than Obama was). But the dangers are only compounded by Trump’s foreign policy, such as it is. The U.S. is currently ramping up wars in half a dozen countries and taking a more confrontational approach with Iran and North Korea, even as the president guts the State Department.

Washington is essentially holding its breath that the generals surrounding Trump are able to keep him off Twitter long enough to reassure foreign allies and adversaries that they should ignore the ostensible commander in chief. But even to the extent they are able to sideline Trump, these generals are naturally prone to escalate conflicts and to seek military solutions, and the result will be more war by default. Meanwhile, the American public is barely paying attention to Eastern Europe, and the mandate for a major new military commitment is non-existent.

What the U.S. should do is use its non-military levers to help put Ukraine, a notoriously corrupt and dysfunctional country with a struggling economy, on more solid footing. There is a common global interest in doing so — for instance, the New York Times reported earlier this month that North Korea’s unexpectedly rapid advances in nuclear missile technology were made possible by rocket engines allegedly stolen from a poorly maintained Ukrainian factory, although Kiev strenuously denies this. Trump’s relationship to the Kremlin is a question mark, but the DC foreign policy establishment’s consistent inclination toward more violence, regardless of who is president, is every bit as troubling.