Paul Weller talks about singing with Boy George, writing for The Monkees and his solo effort "A Kind Revolution" 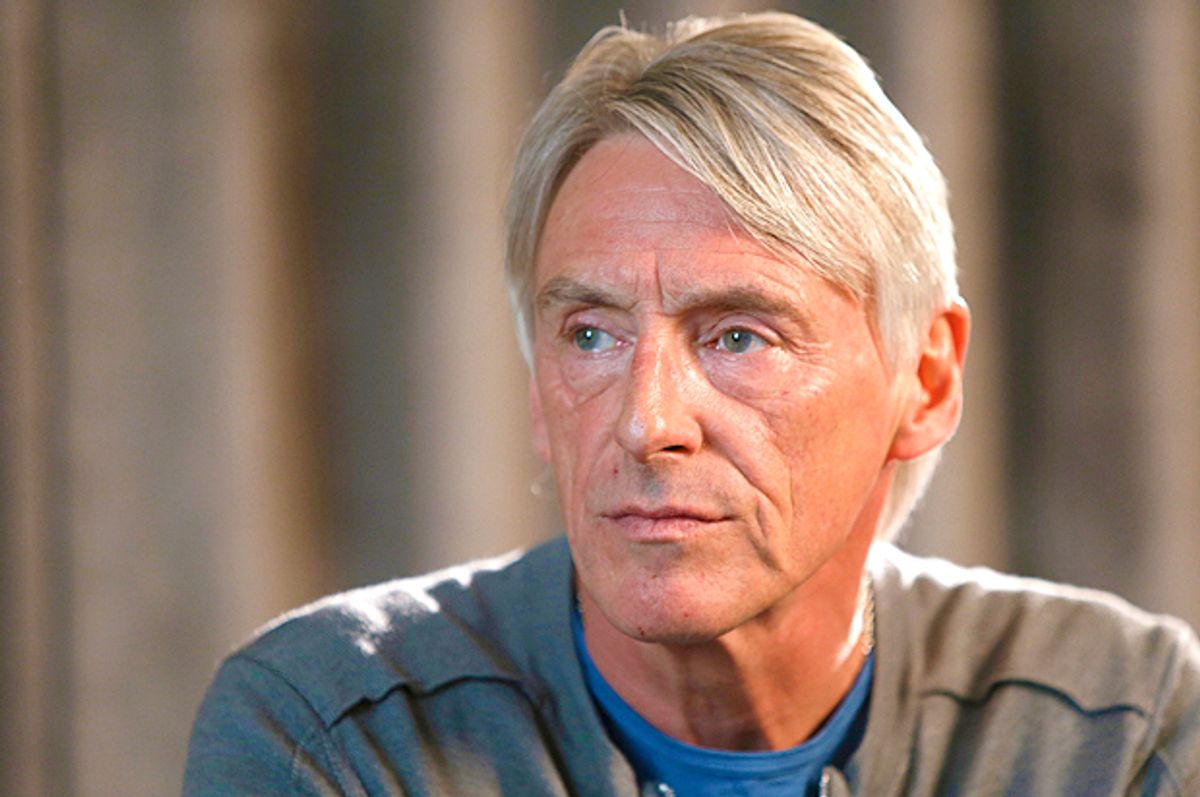 It's not easy to keep up with Paul Weller. The British music luminary — who earned the nickname the Modfather, courtesy of his time fronting Class of '77 punks, The Jam — has seemingly boundless creativity and energy. That's made him an incredibly prolific solo artist: In the last half-decade, he's released three studio records, a compilation album, a soundtrack EP ("Jawbone") and a handful of singles.

On the collaboration tip, Weller and Boy George team up for the haunting "One Tear," which features echoes of both Bowie and easygoing disco-funk, while another British music legend, Robert Wyatt, contributes trumpet and vocals to the debonair pop curio "She Moves With the Fayre." Despite these disparate sounds, "A Kind Revolution" hangs together nicely and draws cohesion from its differences.

Weller had a proper summer vacation this year, in the form of two months off. He's kept busy, of course. In July, he and his wife welcomed a baby girl. Weller also recently released a new non-album single, "Mother Ethiopia," and is hard at work — about "halfway through," he estimates — on his next solo record.

"I've done about five or six, maybe, songs for it so far," he says. "I've got to try and hopefully try and finish it after October sometime. I've got my head into that a little bit. It's going to be more of an acoustic record, not really a rock 'n' roll record, with some orchestration and stuff as well. Strings, brass, wind embellishments. Hopefully something different anyway."

In the meantime, Weller is firing up the touring machine again for September dates in Europe and then a North American trek kicking off October 1 in Huntington, New York. "We can't wait to play, really," he says of the U.S. tour. "They're all highlights. Every night's a highlight. Every day's a bonus. We're looking forward to all of it."

Weller called up Salon to chat about "A Kind Revolution," his recent songwriting collaborations and keeping an open mind.

What inspired the sonic and thematic direction of "A Kind Revolution"?

With my previous record, which was called "Saturns Pattern," I really loved the sound we had going on. I was looking to take that on a bit further. I don't know if we did that. I suppose like with most records, whatever you think you're going to do, you end up doing something totally different — or not the same, anyway. [The new album] rolled on from that in some ways.

But then the songs [on "A Kind Revolution"] are quite different from each other. So I don't know if it's got an overall sound to it or not; I'm not sure. It goes from something like "Nova" to "Long Long Road" and then "She Moves With the Fayre." It's really sort of darting about stylistically. I think, often, the songs decide where you're going to go. There's definitely that element of that. You follow where the songs are telling you where it's going.

Lyrically, was there anything in particular that was inspiring you on this record?

Positivity, but then I think that's probably on a lot of my records. The actual title, and the song it came from, "The Cranes Are Back" — "a kind revolution" is one of the lines — that came from a different place, I suppose. Because looking at the world itself, [how] messed-up it is, and just how . . . . If there's any kind of revolution we need, it will be one of kindness and compassion and hope and love, and not one of bloodshed.

You coaxed Robert Wyatt out of retirement, too, and convinced him to perform live last year. How did you do that? What did you say to persuade him?

[Laughs.] I just picked up the phone and asked him. I tried to make it as simple as possible, 'cause it's hard for him to get around, and he lives going towards the north of England. We sent one of our friends with a tape recorder and recorded his vocal and trumpet up there and then brought it back. He's always up for doing something. I played on the last three of his records, so we're in each other's invisible bands.

We did a gig together last December, just before Christmas, and I managed to coax him out of retirement. It was for Jeremy Corbyn, who's the leader of the Labour Party over here. It was a fundraising thing. It's great to be playing with him again, just to be onstage with him, because it's a pretty rare sight. He hasn't played for over 30 years or something like that. It was really amazing.

You and Boy George sound really great together on "One Tear." I assume you two had crossed paths over the years. How did it come about that you wanted to collaborate with him?

I knew him back from the '80s, but I hadn't seen him for a long time, and I saw him on TV a few years back, when he had a solo record out, and I thought how great his voice has become. He always could sing, but he's got a maturity and a raspiness to his voice now.

We were going to do something on "Saturns Pattern," but it never worked out, time-wise. I thought it would be real nice working on "One Tear." I thought he would be good on that. And that was it. Again, another phone call, and I managed to make sure he was around. And he was down for a couple of hours, two or three takes, and that was it.

Have you thought about doing anything further?

Well, we talked about doing some writing together, but it's like anything — it's time, you know? Everyone's always doing something, either on the road or whatever it may be. But hopefully it will happen at some point anyway, before we get too old.

You recently did a soundtrack, for the movie "Jawbone." What were the biggest differences between creating music for film as opposed to something for your solo career?

I suppose there was a bit more discipline involved, right? Because I didn't do all of it to picture — I did some of it to picture, and that was really interesting to do that. "Well, we need 32 seconds here" or "We need 16 seconds in this part." That was really interesting doing that stuff, because I've never done that before. But the main long piece, which is the mainstay of the soundtrack — on the CD or vinyl, there's a long, 21-minute piece — that was freeform composition.

That was great to do that, because that didn't have any discipline — at first, anyway. But then there was very definite sections as I was doing it, and layering it up, there was definite sections that were suggesting themselves, and certain moods were certain scene[s] in the film. It would come together like that, really.

I was lucky, because I was given carte blanche to do what I wanted to do on it, because I had very definite ideas of what it should be. Not clichéd, and not big drums and the usual thing you see in a lot of British indie films. It was a bit more freeform, a bit more abstract, and yet symphonic in its own way as well.

Did that influence your thinking on the music you've been doing since then at all?

Not really, because it's all music, you know? It all feeds into each other, really, one way or another, and it all comes from the same source, I feel, as well. When I was younger, I used to put things in compartments. But the older I've got and the more music I hear, more varied styles of music, the more I feel it is all . . . almost all of one thing, in some ways. It just depends how it affects you and how it changes you or elevates you — whatever it does to you. If I listen to John Coltrane, it doesn't make me want to go and write a jazz piece or something. The greatness of it I try to include — or at least try to attain anyway.

It makes sense. It's like traveling, or seeing a movie that was really inspiring. It kicks your brain into motion, and you're not going to do something similar, but it piques your creativity and puts you in a new mindset.

[It's] energizing. I bought a Stockhausen record a couple of years ago because I had never heard that sort of music; I had been reading about it. I probably wouldn't have given that the time of day when I was younger. And yet, when I played it, it made perfect sense to me. And [it was] musical as well; it wasn't just a bunch of funny noises. It's just about keeping your mind open, really, innit? The older you get, just to keep an open mind about everything.

You have a new single as well, "Mother Ethiopia." How did that come about?

I was co-producing an album with a band called the Stone Foundation, an English soul band. I was doing a record with them. And then I had this idea, and then we just jammed a bit. They didn't feel they could use it, so I said, "Oh, good, so I'll keep it." That was it, really. It was a bit of an homage to all the great Ethiopian music I've heard in recent years. In my personal feeling, that was sort of the source of life, the cradle of creation, so there's a bit of that in it as well. But [it's] just more out of respect, really.

There's three different parts to it, and the third part has got an Ethiopian female singer called Genet [Assefa] on it, she's from the Krar Collective. There's a krar on it as well, which is an Ethiopian instrument.

You and Noel Gallagher had a song ["Birth Of An Accidental Hipster"] on The Monkees record from last year ["Good Times!"], and it got a great response. How did it come about?

We had a very, very rough backing track, and I was trying to get in to do some writing for a record; I can't remember which album it was now. This was a couple of years back. That was as far as we had got with it.

And then Noel said he had been asked to write a song for The Monkees, so he said, "How about we write one together?" And then I remembered that track, so we reworked it, really, and wrote some words for it. Michael [Nesmith] and Micky [Dolenz] and I think even Pete [Tork] all sing a verse or a bridge or whatever, each — that was quite a nice touch. It's so mad to think we wrote a song for The Monkees.

Were you a Monkees fan growing up?

Yeah, I loved them. I mean, not like I loved the Beatles, but I thought there were some amazing tunes of theirs. And some of the Wrecking Crew played on some of the records. Brilliant, brilliant production [and] players. But great songs — I mean, they chose some great songwriters. Some Mike Nesmith songs were brilliant.

The Monkees record led a lot of people to reappraise their catalog and as musicians and songwriters, I was heartened to see.

It's quite an amazing story, isn't it? To have something that was totally put together and fabricated, [but] there's all this intense, great music coming out of it.