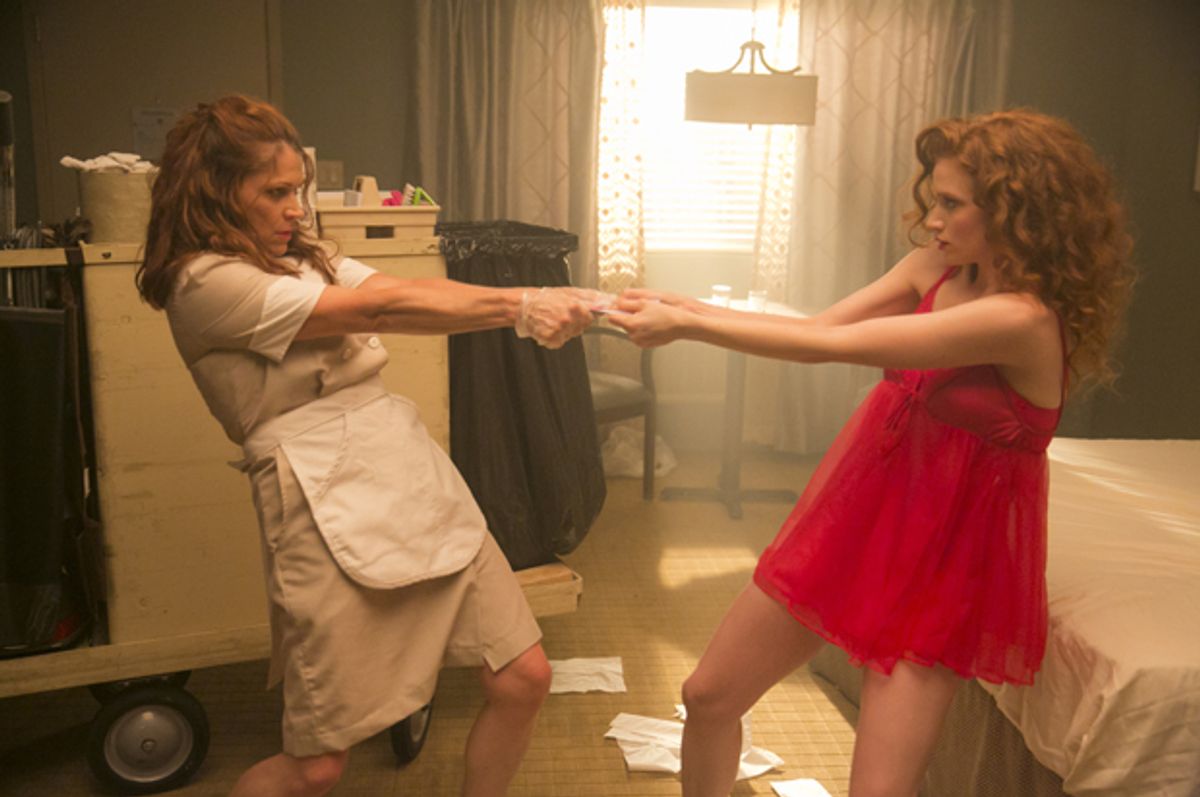 “When I first looked at it, my first thought was, ‘Wow, it’s really beige,’” said Megan Griffiths, who directed “The Missionaries” and “The Fight,” two episodes that have yet to air.

The room’s ordinariness was intentional on the part of Mark and Jay Duplass. It could easily recede into the background, and it forced filmmakers to be inventive. Griffiths described having to “work a lot harder to keep your blocking interesting because your backgrounds are changing so minimally.”

Her first episode, “The Missionaries,” is about a night when two young missionaries’ doubts lead them to explore. Her other episode, “The Fight,” is about two female MMA fighters’ scheme to buck an unfair system. The two episodes manage to feel like entirely separate worlds — in one case, developing male minds; in the other, an octagon.

“I think Mark and [the cinematographer] Doug Emmett had conversations about specifically wanting every episode to bring out something different in the room and to make it feel like it has its own personality,” Griffiths said. “Somehow that room was this great blank canvas that I didn’t really expect it to be.”

This weekend’s episode, “The Voyeurs,” marks the midpoint of “Room 104”’s first season. And that aspect — the same blank canvas being reimagined in a fresh way each week — is a big part of what’s made the show consistently thrilling to behold. Each week showcases a different talented, often young, often not widely known, director.

“There are all these directors that I've loved and have been fans of but who haven't necessarily been right to direct some of our scripts because the scripts have been very much inside the Duplass lane,” he said, referring to a tone that mixes comedy and drama and features naturalistic interpersonal relationship dynamics. “But when I write an episode like ‘Ralphie’ and I really take off my skin, I can say, ‘I'm going to try something really creepy with horror. Let me go hire a director who does that really, really well who I haven't had the previous chance to collaborate with.’”

For “Ralphie,” the series opener about a babysitting gig gone wrong, that director was Sarah Adina Smith. Smith, 34, was coming off “Buster’s Mal Heart,” a thriller starring Rami Malek — equal parts absurd and haunting — about Y2K, an event referred to as “The Inversion,” a character with psychological issues, murder and . . . well, it’s not really important. Suffice to say, there were parallels between Smith’s past work and the tone the Duplass brothers were after for “Ralphie.”

“Sarah has this wonderful, dreamy, surrealist quality to her writing. I was like, ‘Great. Let's match her up with these weird episodes,’” Duplass said.

The other “weird” episode Smith wound up directing was “The Knockadoo.” It is about a predatory cult, and it features a lot of penises[1] and what Smith referred to as “brain rape.”

Smith’s work on “Room 104” was the first time she had directed something she hadn’t also written. (She also hadn’t worked in television before.) But because the material aligned with her sensibility and because of the directorial freedom she was given, viewers could come away from her two episodes with a strong taste for her work. “I tend to make psycho-spiritual films I guess,” Smith said. “But my sense of humor and my skew towards weird and unsettling and dark, I think all of that comes across in these two episodes.”

The same is true of other filmmakers in other episodes. “The Voyeurs” is a wordless, ethereal dance between a maid and a former occupant of Room 104. It was written and directed by the choreographer Dayna Hanson. She said of the episode: “It shows the fact that I think of dance on a really expanded scale. So a facial expression or a tiny gesture is dance in my book, as much as I'm going to play across the room.”

And though “The Fight” is an episode in which physical combat features prominently, it’s the two MMA fighters’ pathos that shines through. That is because, instead of opting for an action director, Duplass, remembering that real female MMA fighters who had never acted would be cast, instead hired “the most sensitive, performance-oriented director I could find [in] Megan Griffiths.”

In the episode, Griffiths takes the action past where the viewer is comfortable, without losing sight of why the characters are fighting against their own interests. “As a filmmaker, what I think I bring to the table more than anything is empathy for characters and a willingness to not judge them and to allow them to make their own mistakes and explorations,” Griffiths said.

These and other filmmakers’ skills and sensibilities shine for the attentive audience in a way that isn’t standard on television. But more importantly for the filmmakers, the work would be noticed by the industry. “It’s because I directed these two episodes of television that all of a sudden I have a career as a television director. It’s been life-changing in a way that I could never describe having come from indie films, where the business model is so messed up and where it’s incredibly hard to make a living,” Sarah Adina Smith said, as she drove to the set of “Legion.”