Under child-king Trump, America is a runaway train — and derailment is imminent

Fatigue and pessimism in the face of this onslaught are understandable. But the American people must choose action 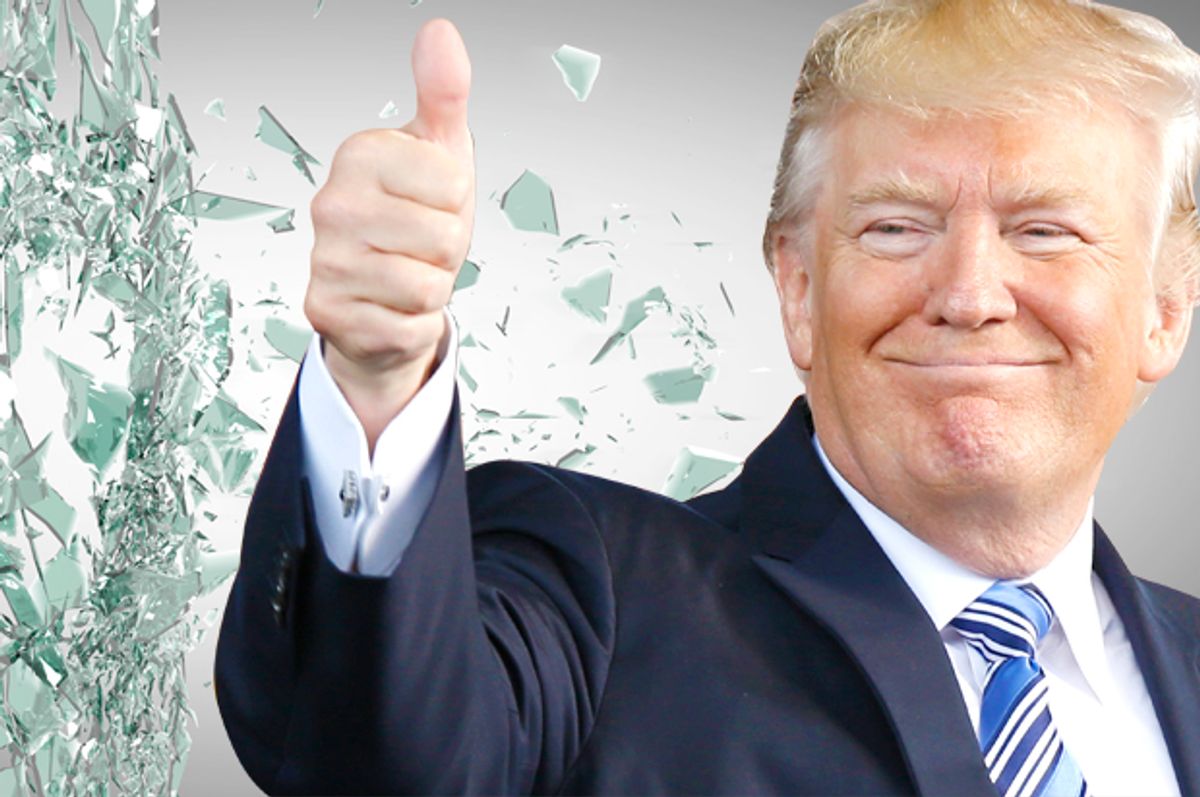 What fresh shame has the child-king Donald Trump, ruler of the American kakistocracy, unleashed upon the country and the world these last few weeks?

There are many instances, but some of Trump's more ignominious "achievements" include an empathy-free and vainglorious visit to Texas in the aftermath of Hurricane Harvey. During said trip he neither visited with the victims nor actually toured the flooded areas firsthand. Instead, Trump chose to hold an impromptu political rally on a parked fire truck. Playing on Twitter and modeling his campaign hats and other overpriced paraphernalia is more important than exercising proper leadership during a national emergency.

Donald Trump also pardoned former Phoenix Sheriff Joe Arpaio. The latter is a white supremacist who bragged about running a "concentration" camp where he systematically violated the human rights of Latinos and Hispanics. Trump also found time to promote a new book by former Milwaukee County Sheriff David Clarke, a thuggish and out of control "law enforcement" officer who recently resigned his office, presumably to take a position in Trump's administration. Clarke's county jail is infamous for abusing prisoners; more than a dozen inmates have died there during his tenure.

Trump has also decided to allow local police departments to (once again) have access to surplus military weaponry and equipment. This is a logical extension of his encouragement of police thuggery and his perception of America's police as his personal enforcers. Against the advice of senior commanders, Trump has also barred transgender people from serving in the United States military.

Trump has also evidently decided to overturn the DACA act. Children and adults who are productive members of American society will be harassed and deported by U.S. Immigration and Customs Enforcement officers. Despite repeated promises that he would not seek to break up immigrant families, Trump apparently will do so.

It is very easy to become fatigued and exhausted by Donald Trump's behavior and the seemingly endless deluge of personal malfeasance, scandals, greed, meanness, lies and bigotry that emanate from his administration. The American people -- and too many of the country's journalists -- are stuck in a state of political vertigo. This is by design: A societal condition of exhaustion and confusion is one of the primary ways through which authoritarians expand and maintain their power. Historian Howard Zinn warned us of the dangers present in such a moment. He keenly observed how “pessimism becomes a self-fulfilling prophecy; it reproduces itself by crippling our willingness to act.”

There are voices who continue to sound the alarm about the American fascist Donald Trump. Rather than be numb, we should heed their warnings.

Writing at the New York Times, Charles Blow connects Donald Trump's cult of personality and expertise in brand marketing to violence and the threats of a second American civil war:

Trump sees all these people who want to use him, and he’s using them right back. Trump made an industry out of selling conspicuous consumption. He sold the ideas that greed was good, luxury was aspirational and indulgence was innocent.

Trump’s supporters see him as vector; he sees them as market. ...

But in addition, and perhaps more sinisterly, I think that Trump is raising an army, whether or not he would describe it as such, and whether or not those being involved recognize their own conscription. This is not a traditional army, but it is an army no less. ...

At the New York Review of Books, Masha Gessen also sees the clear and present danger posed by the violence and thuggery inspired by Donald Trump and the foot soldiers who follow his lead:

Putin did not invent vigilantes, of course: autocrats frequently rely on delegating violence to extralegal actors or, as in the case of Rodrigo Duterte of the Philippines, on the willingness of law enforcement officers to carry out extralegal violence in exchange for the promise of impunity. Duterte has made this promise explicit; more often, incitement to violence contains a tacit guarantee of protection.

Over the last two weeks, we have seen Donald Trump send out both kinds of signals to the vigilantes of his own choosing. His refusal to condemn the violent marchers in Charlottesville, in pointed and repeated break with political convention, was rightly interpreted by the white supremacists as a signal of encouragement. ... Trump had encouraged extralegal violence in the past — like when he called on police not to be “too nice” to suspects. But the two weeks bracketed by the violence in Charlottesville and the pardon of Arpaio herald a definite turn away from the institutions of a government he despises. ...

Trump’s base shares his contempt for the Washington institutions that are once again exposing their duplicitous nature. Some of this base also happens to be armed. This includes Americans civilians who like guns (and Trump). It also includes the self-arming militia types. It includes Immigration and Customs Enforcement officers who have for months now been encouraged to exert force indiscriminately. And it includes rogue law enforcement officers who see themselves in Arpaio.

In a recent series of Twitter posts, the Anne Frank Center has continued its effort to warn the American people and the world of how Donald Trump's authoritarian tendencies and embrace of racial fascism are an echo of Adolf Hitler's apocalyptic regime.

I would offer the following context for the alarms sounded by Blow, Gessen and the Anne Frank Center.

Much of the mainstream corporate media is establishing a false equivalence in which fascists, neo-Nazis and white supremacists pose the same type of danger as the anti-fascists who oppose them. This is absurd. Moreover, this false-equivalency, "both sides do it" narrative actually assists fascists and authoritarians in their assault on democracy and freedom.

Democracies can also be undermined from within by elected officials such as Donald Trump. Extreme political polarization and a devotion to an authoritarian can -- even in a modern, healthy democracy -- supersede and override a belief and respect for the country's democratic institutions. This dynamic has taken hold over Trump's voters and other backers in the Republican Party who are determined to support their leader regardless of his disdain for democracy and civil rights. (Or indeed because of those things.)

Approximately 30 percent of the American people fanatically support Donald Trump. This is a core group that cannot be swayed by facts, evidence or empirical reality to move away from a man they idolize and adore. These are tens of millions of people, a group more than large enough to cause mass civil unrest and violence if they believe that Donald Trump has been unfairly impeached, forced to resign or otherwise removed from office because of his actions.

In some corners of the internet there is a sophomoric and silly "rule" which dictates that referencing Hitler relative to contemporary politics is somehow off limits. Such claims are the terrain of those who have not properly studied history. Those who boo-hoo about Godwin's law are unable or unwilling to understand how the past holds many lessons for the present and future.

We locate Donald Trump within a continuity of fascists and authoritarians because not to do so is to ignore the threat he represents to American society, as well as the harm he has already done to our political culture.

Howard Zinn warned: "You can't be neutral on a moving train." We cannot choose to get off of this train. The best we can manage to do, perhaps, is to understand its destination, contemplate its origins, figure out where we are seated, and how we got there. And then we can choose action over inaction.

If America is a train its destination is Trumplandia -- and a derailment is imminent.

What will the American people do to regain control of the train? The answer to that question will either save us or doom us all.