Keep on truckin’ — no, seriously Trump wants you to 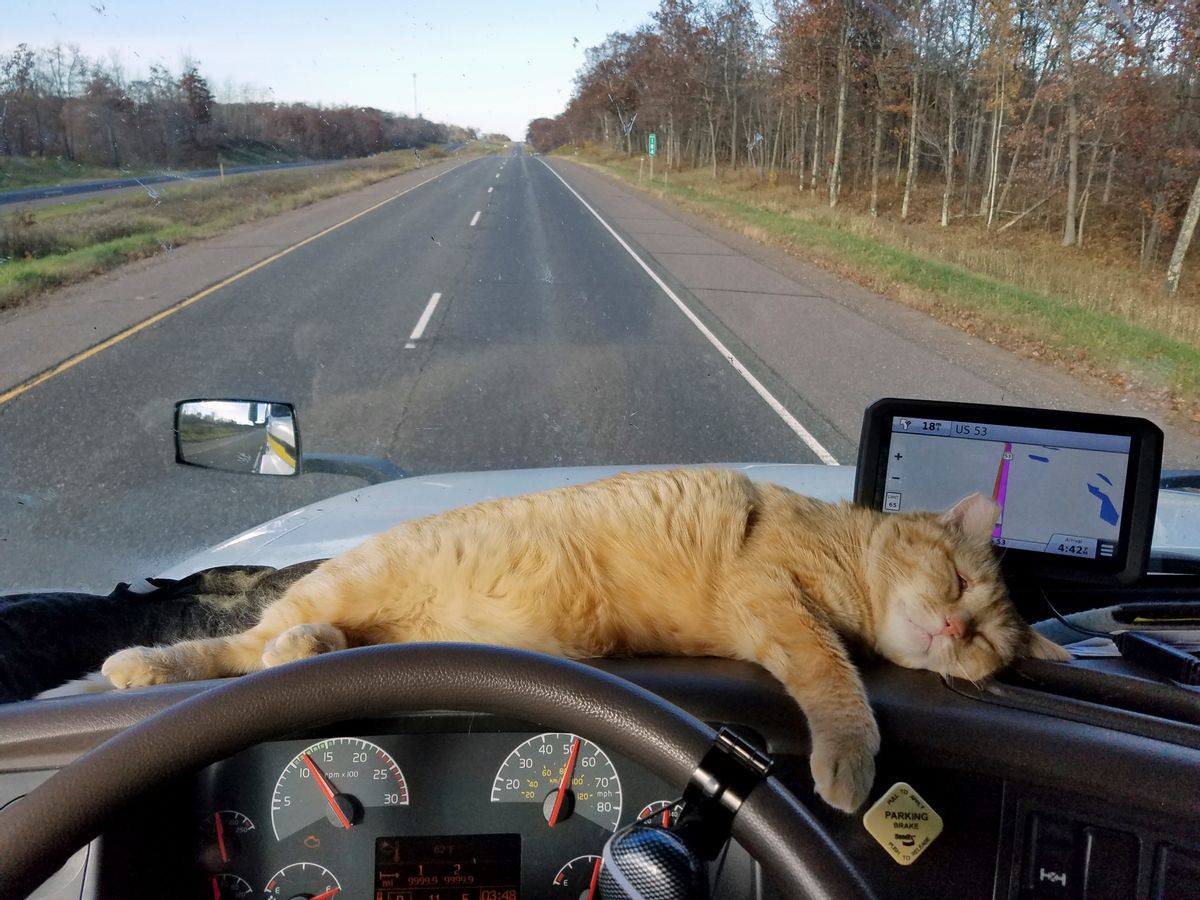 This Oct. 22, 2016 photo provided by Paul Robertson shows Percy the cat lounging on the dashboard of owner Paul Robertson's semitrailer. Robertson, a long-haul semitrailer driver, was reunited with his cat during a delivery in Shoals, Ind., on Feb. 25, 2017. Percy survived a trip of 400 miles by clinging to the undercarriage of his semi. Robertson thought he had lost his traveling companion at a rest stop in Ohio and was astonished when the cat wandered out from under the truck in Indiana. (Paul Robertson via AP) (AP)
--

We’ve talked before about how President Trump has never met an Obama-era regulation that he’s liked. That’s never been more true than for labor regulations. As we reported in May, Secretary of Labor Martin Acosta has already slashed worker health and safety and job training, repealed overtime protections for up to 13 million people and rolled back fiduciary rules designed to protect workers and retirees from investment advisers’ conflicts of interest.

According to the Department of Labor (DOL) Statistics, trucking is one of the most dangerous jobs in the country. Fatalities from truck accidents accounted for more than a quarter of all workplace deaths in 2015, the last year for which the DOL has figures. And for the most part truck driving deaths have been going up — 11.2 percent in the past five years. Industry critics and unions maintain this is mostly due to the deregulation of the industry and the phenomenal growth of online shipping megaliths like Amazon.

In 2016, the Obama administration began an effort to study and combat sleep-apnea related issues among both long-haul truckers and railroad workers — a condition responsible for several deadly rail accidents and multiple trucking-related deaths. In August, the Trump administration announced it was halting the year-old effort. The Federal Motor Carrier Safety Administration and the Federal Railroad Administration said in a statement that they “‘believe that current safety programs’ and other rules ‘addressing fatigue risk management are the appropriate avenues to address.'”

Not so fast, says Benjamin H. Snyder, author of "The Disrupted Workplace: Time and the Moral Order of Flexible Capitalism," in an article for Slate. While not a huge fan of the Obama-era study, Snyder contends that it was the best truckers had in a bad situation:

The combination of deregulation and deunionization has deeply degraded working conditions for truck drivers… Through a grueling pay-by-the-mile system, drivers are incentivized to push themselves harder and harder to maximize revenue from each shift. Of course, this means more time sitting behind the wheel and less time sleeping, exercising or cooking healthy meals. When they do sleep, there is no consistent pattern. Drivers must be prepared to sleep at any time of day on any given day. If earnings are so tight and it doesn’t pay to sleep regularly or keep fit, is it any wonder truck drivers are at high risk for sleep and health problems?

An ironic aspect of the deregulation of the trucking industry has been an increase in regulations on truckers. While trucking firms have become freer, drivers have lost control over how they work on a daily basis. And because they lack strong unions to lobby on their behalf, drivers have little say over how these rules are designed and implemented. The proposed mandatory test for sleep apnea was just one example of this trend — it is a kind of desperate stopgap measure that is necessary only because trucking firms have allowed working conditions to degrade so severely.

But those deregulated rules are already not enough for many states. According to the Los Angeles Times, California is worried about “a provision in a House appropriations bill [that] would allow federal regulations to exempt truck drivers who cross California boundaries from the state’s strict meal and rest requirements.”

According to the industry magazine OverdriveOnline, the administration may have its eyes on other Obama-era rules including the Minimum Training Requirements for Entry-Level Commercial Vehicle Operators rule and a handful of others. The minimum training rule been allowed to take effect, but it remains firmly within industry and administration sights.