Man dies after jumping into bonfire at Burning Man festival

According to authorities, Aaron Joel Mitchell hurled himself into flames during the event's "Man Burn" 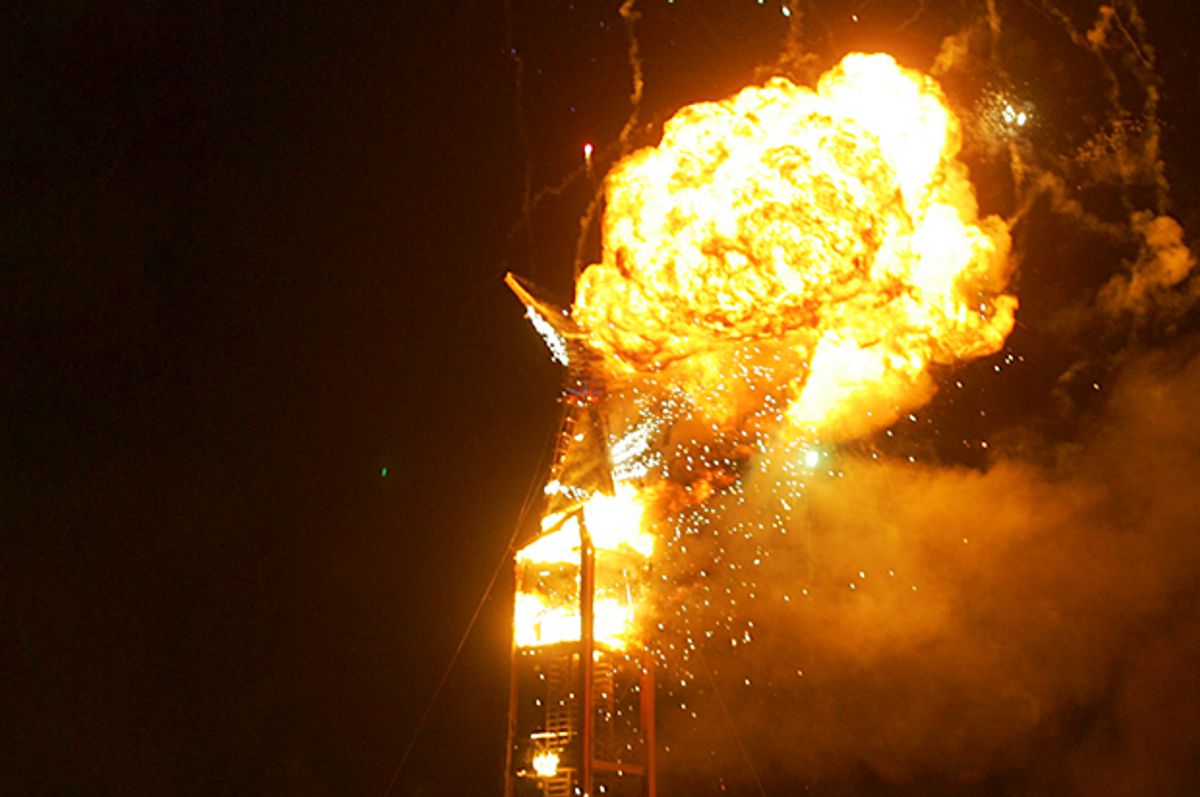 A man died of his wounds after running into the final bonfire during the climax of the Burning Man festival in Nevada's Black Rock Desert Saturday, the Associated Press reported.

According to witnesses and authorities, Aaron Joel Mitchell pushed his way through layers of security and fencing and jumped into the flames that were then consuming the giant wooden framework totem whose immolation gives the weeklong festival its name. Despite responders airlifting Mitchel to the UC Davis hospital burn center in California, he succumbed to his wounds Sunday morning. Videos of the event have surfaced on YouTube and other outlets.

The office of Pershing County Sheriff Jerry Allen told the press in a statement that first responders could not rescue Mitchell from the fire until after the structure of the 50-foot high totem had fully collapsed. "Rescuers had to leave him to allow the structure to fall and provide for rescuer safety before they could go back into the flames to extract Aaron from the debris," the statement reads.

The sheriff's office also made no statements about Mitchel's possible motives for running into the flames. "We don’t know if it was intentional on his part or if it was just kind of induced by drugs. We’re not sure of that yet," Sheriff Allen said. The AP adds that Allen said, "The sheriff said doctors confirmed Mitchell wasn’t under the influence of alcohol, but a toxicology report is pending."

Mitchell, a 41-year-old native Oklahoman, had traveled from Switzerland, where he lived with his wife, to attend the festival for the first time.

Founded in 1996, the annual Burning Man festival has grown from a small group of friends burning a small wooden statue of a man in the desert to a massive cultural event attracting tens of thousands of "burners" every year who dance, share art, engage in a limited barter economy and indulge in various substances in what is essentially a temporary camp city in the Nevada desert. Authorities estimate that this year's event attracted 50,000 attendees.

At the gatherings, and some of the satellite events created by Burning Man's wide diaspora of fans, the immolation of totemic wooden statues and other structures in massive bonfires is a central part of the celebrations. Indeed, while organizers temporarily banned larger bonfires this weekend after Mitchell's death, they set another massive man statue ablaze further toward the festival's end.

Mitchell is by no means the first to die at the festival. In its 21 years, no less than a dozen attendees or organizers have perished due to their involvement in the event from a mix of causes including drug overdose, freak accident and simple physical exhaustion (this does not count those who have died on the way to or away from Burning Man). In 2001, another man ran into a burning structure and died of his wounds.

Regardless, this handful of deaths and the many more injuries seen at or around the festival is minor given that the event attracts tens of thousands of attendees to a brutally hot and fairly isolated stretch of desert every year.