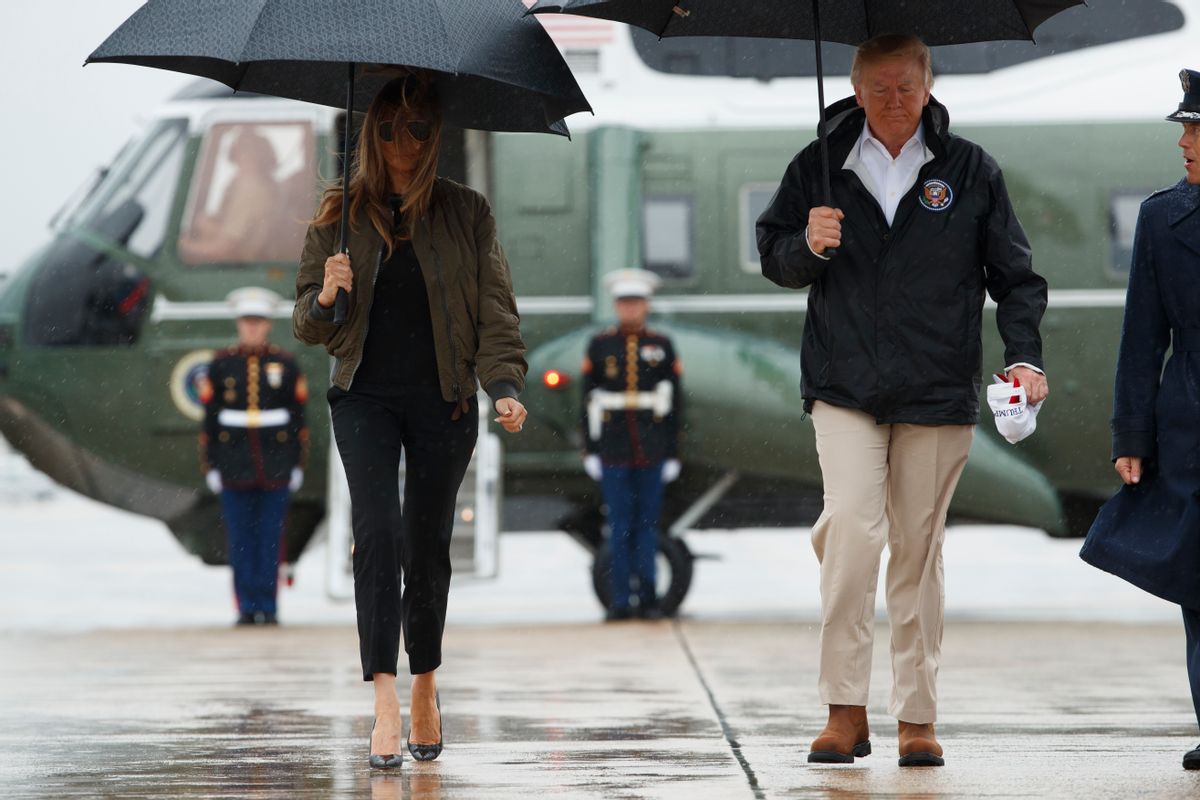 This article originally appeared in Guacamoley.

Last week, President Donald Trump announced he would donate $1 million of his own funds to Hurricane Harvey relief efforts. White House Press Secretary Sarah Huckabee Sanders seemed to slow-walk that promise on Friday when asked where the funds would come from.

"He has not finalized where all of that will go," Sanders said at the time. "I was actually going to use that as a perfect segue to remind everybody if you have suggestions, he is very open to hearing those. We've got a couple, but please send more if you have them."

Journalist David Fahrenthold, who won a Pulitzer Prize last year for his investigations into Trump's philanthropy, reminded his followers that it's unlikely the Donald J. Trump Foundation, which the president chairs, would make the donation while still under the scrutiny of the office of Eric Schneiderman, the New York Attorney General.

But did anyone really believe Trump's promise to donate to the relief efforts, anyway? It doesn't seem so. According to Tony Schwartz, the journalist and professional speaker who ghost-wrote Trump's 1987 book, The Art of the Deal, victims of Hurricane Harvey's destruction are in for a rude awakening. "He only promises to give," Schwartz wrote in a tweet Friday morning. "Never actually does."

Users on social media also questioned the veracity of Trump's promise; some noted that Trump had promised to donate a $5 million to charity in exchange for hard evidence that proved President Barack Obama had been born in the United States. (Two years later, Trump, in a speech at the National Press Club, claimed to have upped the reward to $50 million. Trump insisted his actual offer "wasn't reported by the press.")

Donations that Trump reportedly has made also have the naughty habit of disappearing. In July 2016, New Jersey Governor Chris Christie said that his wife, Mary Pat Christie, received money from Trump in 2012, for a relief fund she ran after Hurricane Sandy battered the state. The Associated Press could not find a record of Trump's donation, and when asked about, Christie claimed he had misspoken when asked about Trump's donation.

Additionally, the Eric Trump Foundation has been under investigation since June, when a Forbes report revealed Donald Trump began charging for the use of Trump Organization golf courses, ultimately funneling the money into other charities which benefited his business interests, once his son Eric’s charity golf tournament started raising a substantial amount of money for St. Jude Children’s Research Hospital, which specializes in pediatric cancer. Money meant for St. Jude’s — more than $500,000 — was rerouted to other charities run by Trump associates after the elder Trump installed his own people on the foundation’s board.

The president's history of charity is sketchy at best, and, given his purported wealth, a signal that the pledge is likely a pledge in name only, strictly for publicity purposes. The fact that people are questioning whether the President of the United States will actually make good on his promise says everything.