Revealing the mystery behind “Twin Peaks: The Return”’s new mysteries

Why did David Lynch and Mark Frost end “Twin Peaks: The Return” the way they did? 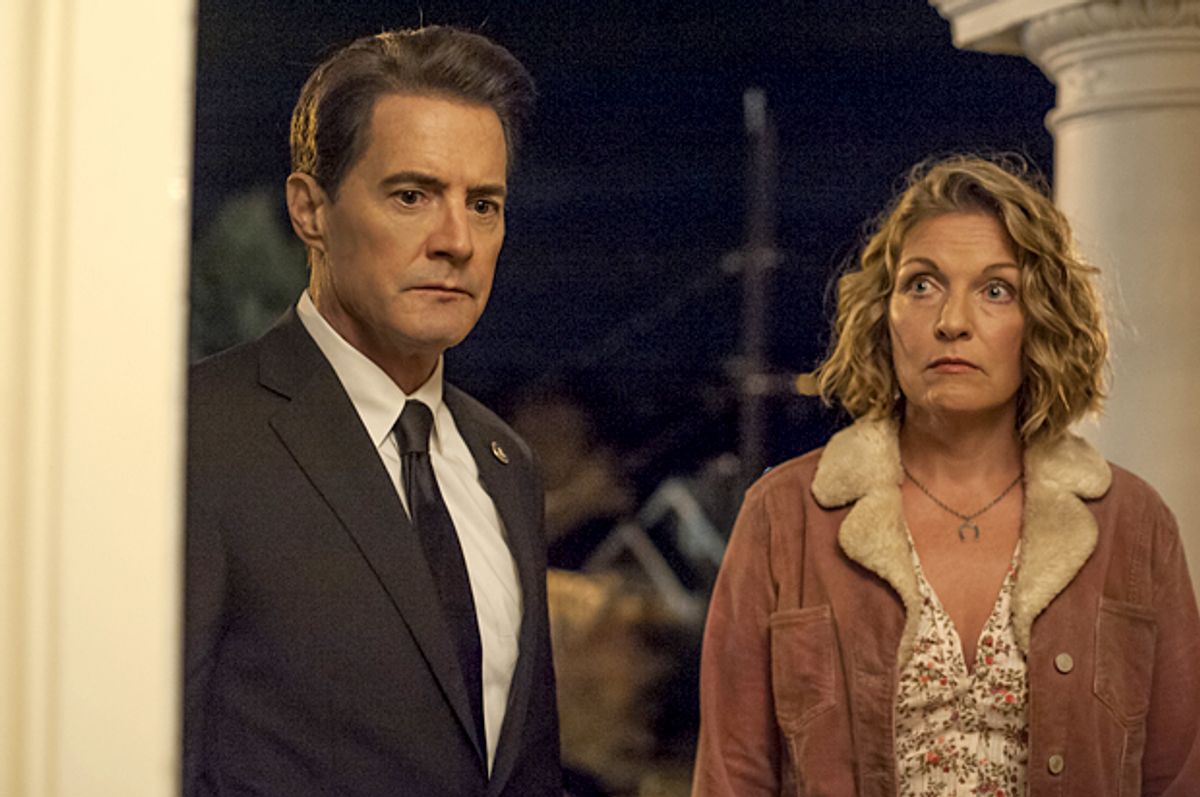 I mean this in a value neutral sense: The finale of “Twin Peaks: The Return” was confounding. It was confounding because of the episodes that led up to it. David Lynch and Mark Frost were on the verge of tying the various plot threads together — and they succeeded in doing so with some (killing Mr. C) — but instead they cast a few aside (What happened to Audrey Horne?) and tangled the ones they tied into something resembling an existential puzzle.

There are, and will be, plenty of theories about what happened — about what happens when characters cross dimensions, about the role of the Tremonds and Chalfonts and about whether Agent Cooper (or Richard?) and Carrie Page (or Laura Palmer?) are in the past or the future when they visit Laura’s old home in the final scene. But the only theories I’m interested in are the ones that explain why Lynch and Frost elected to end the show the way they did.

To recap the final episode: Cooper wakes up in the Black Lodge, finds a forest of barren trees beyond a curtain and is reunited with Diane. They drive through the desert, where they find a portal. They cross the portal, stay the night at a motel and have sex. In the morning, Cooper finds a goodbye note addressed to Richard (perhaps him), from someone named Linda (perhaps Diane). He picks up Carrie Page (a woman who he thinks is Laura Palmer) from Odessa and brings her to her childhood home in Twin Peaks. She doesn’t recognize the home at first and the Palmers don’t live there. But when Cooper asks, “What year is it?”, Carrie/Laura shudders and then screams.

The episode felt like a response to the one that came before it. The penultimate episode was dedicated to Agent Cooper killing evil (with help from Freddie Sykes and Lucy) and executing a plan to undo Laura Palmer’s death. In the finale, the universe seemed to respond with, “Things aren’t so simple.” Answers were followed by questions.

Plenty of shows have struggled with resolution but it’s hard to recall one that has bucked resolution like “The Return.” This was a show that had the end in sight from the beginning — Lynch compared making it to making an 18-hour movie — so we can assume that the ending was thought through, not some corner Lynch and Frost backed themselves into. There’s also no indication that Lynch and Frost were setting the stage for another season.

Instead, the new mysteries they unraveled seemed intended to haunt the viewer. It’s become a clichéd trope for characters on television and in the movies to find themselves in absurd or terrifying situations, only to wake up and realize it was all just a dream. In the penultimate episode, a large Cooper face superimposed behind Cooper says, in slow motion, “We live inside a dream,” a callback to a scene in “Fire Walk With Me.” The show, like Lynch’s other work, has always employed some degree of dream logic. But here, the point became especially pronounced: It wasn’t all just a dream; it is all just a dream.

But is the “we” living inside the dream humanity? The characters within the world that the show has always led us to believe is the real world? Or is it a meta commentary? Is the “dream” television?

There’s no right answer (unless Lynch says there is). But the show sure has a tendency to lodge itself in the viewer’s brain, much like a dream. It’s the sort of art that with time becomes indistinguishable: Did that happen, was it a dream, or did I see it on TV? The characters are living in a dream and the dream lives in us. When Cooper says “See you at the curtain call” in the penultimate episode, it seems like he’s talking to the viewer as much as he is talking to the characters on the show.

A kind of macabre metaness is woven throughout the season. In one episode, for instance, the Log Lady, played by Catherine Coulson, calls Hawk to tell him she is dying; by the time the episode aired Coulson herself had died. Other dead actors’ characters were reintroduced in new forms: David Bowie’s Phillip Jeffries as a tea kettle; Don S. Davis’s Maj. Garland Briggs as a floating head. And Cooper’s return mirrored the show’s: It took a while but when it happened it was initially exultant. There is space to interpret “The Return” as a commentary on returns.

So, could the show’s final episode have been addressed to fans as much as it was for them? In its final hour “Twin Peaks: The Return” sprouted out instead of looping back, suggesting the mysteries are continuous and the case is never closed. The “Twin Peaks” story will always be unfolding in some plane of existence, be it televisual or metaphysical.