AP vs. EPA: Trump’s war on “fake news” has infiltrated the government 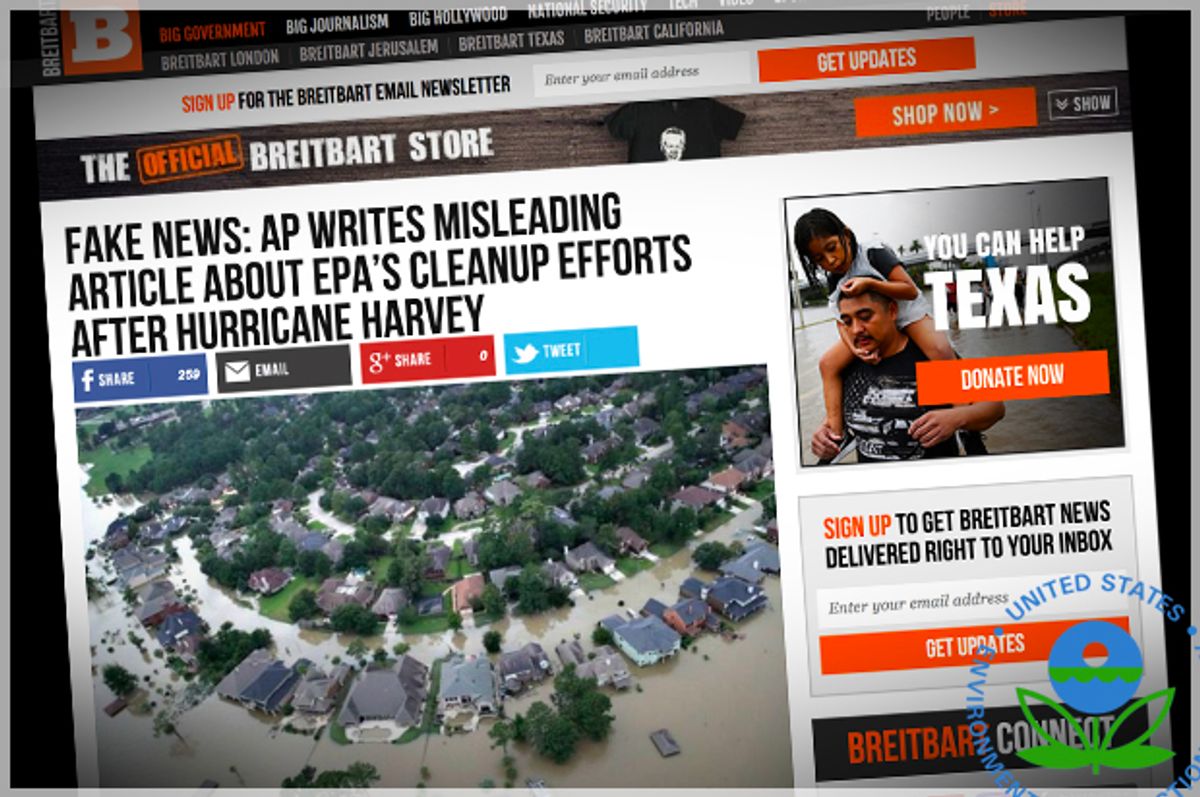 Scott Pruitt appears to be the most Trump-like member of Donald Trump's cabinet, and now the federal agency he is tasked with leading, the Environmental Protection Agency, has officially adopted the president’s most pernicious habit.

When Trump recently visited hurricane-ravaged Houston he praised the Coast Guard while knocking the journalists tasked with covering the aftermath of Hurricane Harvey.

“Think of it, almost 11,000 people by going into winds that the media would not go into . . . unless it’s a really good story,” Trump said, before gesturing toward the media.

That same day, the Associated Press published a story about the flooding of toxic waste sites in Houston, noting that Scott Pruitt's EPA was still not on the ground. The agency responded in Trump-like fashion, attacking the press to distract from legitimate questions.

Echoing Trump’s longstanding habit of singling out specific reporters for attacks, the EPA called out one reporter on the story by name in a news release titled “EPA Response to the AP’s Misleading Story.” Remarkably, the statement starts with a personal attack on Washington-based AP reporter Michael Biesecker:

Despite reporting from the comfort of Washington, Biesecker had the audacity to imply that agencies aren’t being responsive to the devastating effects of Hurricane Harvey. Not only is this inaccurate, but it creates panic and politicizes the hard work of first responders who are actually in the affected area.

Biesecker’s AP colleague Jason Dearen, however, visited seven toxic sites known as “Superfund sites,” the most contaminated toxic waste sites in the country, in and around Houston -- by boat, vehicle and on foot.

After the waters receded in the town of Crosby, Texas, situated between two Superfund sites, "a sinkhole the size of a swimming pool had opened up and swallowed two cars," Biesecker wrote. "The acrid smell of creosote filled the air." The Saturday report also noted that the “EPA had not yet been able to physically visit the Houston-area sites.”

In its unprecedented attack, the EPA accused the AP of leaving out information about the EPA’s other efforts to monitor the toxic land sites.

“Once again, in an attempt to mislead Americans, the Associated Press is cherry-picking facts, as EPA is monitoring Superfund sites around Houston and we have a team of experts on the ground working with our state and local counterparts responding to Hurricane Harvey,” EPA associate administrator Liz Bowman wrote in a statement. “Anything to the contrary is yellow journalism.”

The release went on to criticize past reporting by Biesecker, arguing that he has a "history of not letting the facts get in the way of his story." To illustrate this, the EPA linked to a sensational Breitbart story that claimed the AP faced a “CNN-like scandal” after a July story Biesecker wrote inaccurately characterized an interaction between Pruitt and Dow Chemical CEO Andrew Liveris. Biesecker’s story, based on EPA schedules, initially said the two met for half an hour at a Houston hotel. The AP's story turned out to be wrong because they were reporting on inaccurate meeting schedules provided by the EPA. The AP corrected its story when the formal meeting was canceled.

Besides the personal criticisms it leveled against the report's author, the EPA’s statement did not point to any specific factual inaccuracies in the AP’s story. The report’s co-author, who reported from on the ground in Texas, was not singled out by the EPA statement. In fact, the EPA appeared to confirm the AP’s report overall, noting that more than a dozen sites have been flooded and that EPA has not investigated them in person -- only monitoring the waste sites by plane until the floodwaters receded.

When pressed by reporters about the aggressive statement, agency officials continued their attack on the media.

"We understand you are very focused on our press release; we hope you will apply the same focus to the facts, which include that a national reporter from a wire service publishing [sic] inaccurate and misleading stories about the agency and it’s [sic] staff on the ground," Bowman wrote in an email to Politico over the weekend. "We think that is more important than who drafted a press release."

Earlier this year Trump called the press the “enemy of the American people.” Beyond the damage of his rhetoric, however, Trump’s war on so-called fake news through the official channels of the federal government can only have a chilling effect.

For its part, the AP standing by its story and its reporters.

“AP’s exclusive story was the result of on the ground reporting at Superfund sites in and around Houston, as well as AP’s strong knowledge of these sites and EPA practices," AP's executive editor Sally Buzbee said in a statement. "We object to the EPA’s attempts to discredit that reporting by suggesting it was completed solely from 'the comforts of Washington' and stand by the work of both journalists who jointly reported and wrote the story.”