"Outlander": In the third season, all's unfair in love and war 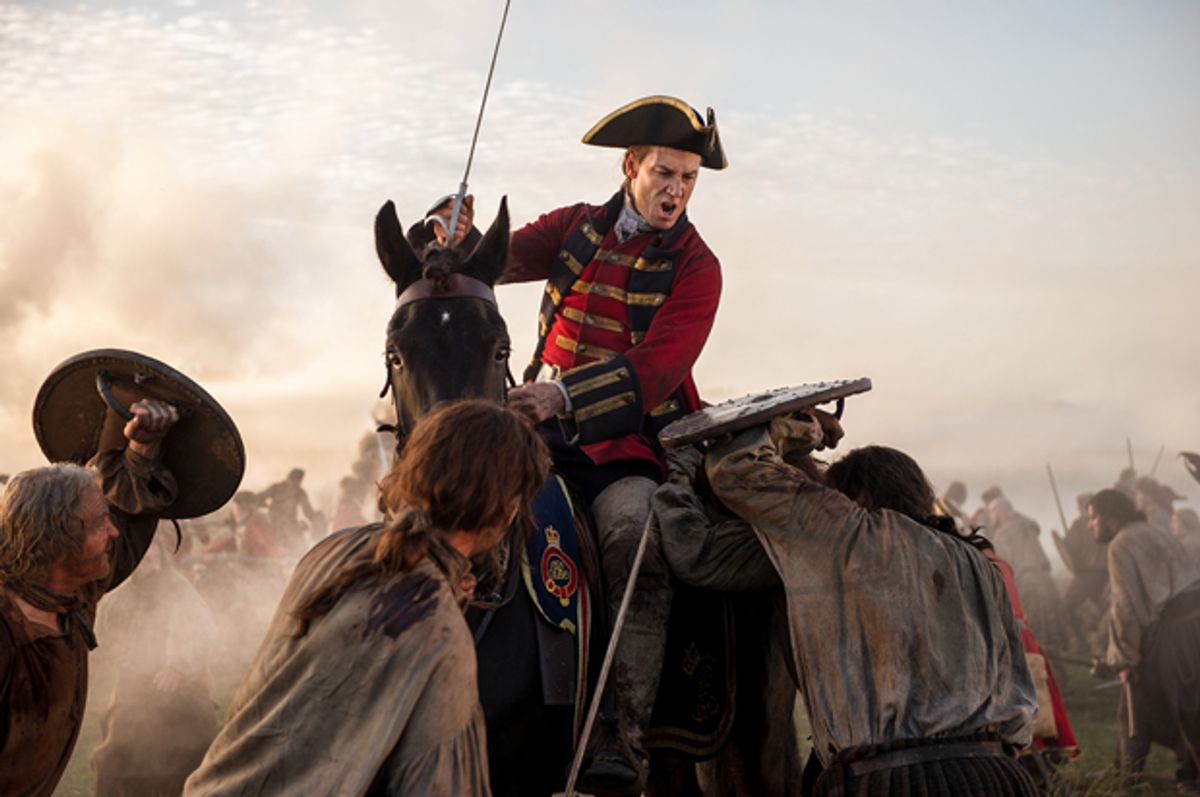 No great romance exists without tragedy in the mix, whether specified or implied. This is the reality of love and loving, as well as the charge that has made “Outlander," returning for its third season Sunday at 8 p.m. on Starz, an international phenomenon.

Often the Starz drama is lauded for its incredible set and costume design and ambitious cinematic scope, but the series’ pensive, poetic exploration of the human heart’s mysteries, and the quixotic nobility of commitment, is singularly brilliant and underappreciated in the realm of top shelf TV dramas.

This is because “Outlander” also happens to be a romance that involves time travel in which a woman, Claire Randall Fraser (Caitriona Balfe), is the central focus. Claire, an English woman and a former combat nurse from 1945, somehow tumbles into the past — specifically a 1740s Scotland on the edge of rebellion against its British occupiers.

Romance tends to be dismissed as a soft genre. “Outlander” is anything but soft. Time and again it visits unspeakable cruelties on its hero Jamie Fraser (Sam Heughan), Claire’s great love in the 18th century, including in the second season finale, when Jamie virtuously sends Claire back to the 1940s and into the arms of her first husband, Frank Randall (Tobias Menzies), who is waiting for her.

Season 3 finds Claire grappling with the truth of what others may characterize as incredibly good fortune: she is the object of desire of two good, loyal mates who truly cherish her, each parted by 200 years. And that knowledge is heartbreaking.

The plot of “Outlander” rested on its love triangle for the first two seasons, with Claire’s heart torn between Jamie and Frank in the first season before definitively choosing her Scottish husband in the second. Diana Gabaldon’s books and the series mainly focus upon the bond existing between Jamie and Claire in 1740s, with Frank always lurking around the fringes.

In the series, executive producer Ronald D. Moore employs a balance of male and female writers and directors to tell this story with an eye toward ensuring the series honors the female perspective as well as the masculine. But essentially what this means is that Jamie gets the most opportunities to prove his bravery and his devotion, and Heughan gets to utter dialogue designed to make your soul burst. (Ladies, get you a man who declares he’ll stand before God and call you a rare woman that he loved well.)

Balfe and Heughan are radiant onscreen presences, separately and together, and while a sizable portion of the show’s fanbase drools over Heughan the dynamic chemistry he shares with Balfe sells their story. Their sexually charged relationship is augmented by writing Claire as an inquisitive, keen intellectual who is courageously insistent upon being afforded respect in a society dominated by men.

Season 3 takes this notion in a new direction as Claire readjusts to life in 1948 as Frank’s wife, in an era that seeks to roll back the empowerment women gained through the war effort by curtailing their rights and pushing them back into the home.

“Outlander” often places Claire in situations that lead her to wonder whether she has more freedom in her version of modern times or in the 18th century. When she first fell through time, she was shocked at the lack of status women held in 1743 but learned soon enough where and how to press her influence and exercise her agency.

This also means the Valentine cards are stacked against poor Frank Randall, Claire’s faithful and true man who never had to defend her honor with a sword but nevertheless pledges to support her, and the unborn child she brings with her from the past, come what may.

The first season of “Outlander” rides a whirlwind of adventure and romance, while season 2 blends the rose-colored sensuality of Jamie and Claire’s partnership with the impending calamity of Jamie’s march toward the inevitable defeat in the Battle of Culloden.

Season three commences in a place of quiet tragedy. And it’s tough to tell whose situation is worse — Jamie, who is remains broken, defeated and loveless in 18th century Scotland; Claire, stuck in a regressive post-war America where she wants for nothing except for her greatest love; or Frank, who dedicates himself to a woman besotted with a ghost.

As usual, the writers handle this divide with a combination of care and visual extravagance, although circumstances call for far less opulence than when Jamie and Claire travel to France in the second season. The Scotland in these new episodes is a cold, grey and muddy place, and the Fraser clan is gripped with anxiety, always bracing for some new harassment. Half of the series’ romantic tug rests in the idea that even a passion ripped out of time cannot stop the tide of history washing over the world.

Sadly, in 1948 and beyond, history mercilessly rolls over Frank, a man who has the terrible misfortune of having more or less the exact same face as his ancestor Black Jack Randall, a British officer with violent sociopathic tendencies. Claire loves the memory of her life and love with Frank; that much is clear. But Claire loves the reality of Jamie even more. This is no spoiler to anyone who watched the second season, which intersperses the adventures leading up to the Jacobite uprising in 1745 with Claire’s life in 1960s with her daughter Brianna (Sophie Skelton), who has the red mane of her Scottish father.

The third season affords Menzies more of an opportunity to expand upon the gentler of the two characters he plays in “Outlander,” granting Frank a still depth paternal magnanimity colored by a discontent that lends heft to his and Claire's lamentable situation.

These new “Outlander” episodes also resets Jamie’s 18th century life, an inevitable part of dispensing with so many central characters at the end of last year and perhaps losing more in the Battle of Culloden. The season premiere finds fire in its blend of action and survival, whether concretely in the heat of battle or figuratively in the smothering societal expectations of an America that has yet to feel the impact of second-wave feminism.

For all of the despair the narrative visits upon its characters, “Outlander” remains as seductive as ever, in part due to the dangled promise of the second season finale that its lovers would one day be reunited. Because of this, the story never sinks under any ballast of hopelessness, choosing instead to spend time allowing viewers to perceive the pangs of loss in order to sweeten the arrival of any uplift fate, or the show’s writers, deem fit to dispense.