When you work for Trump, you’re gonna end up covered in brown stuff 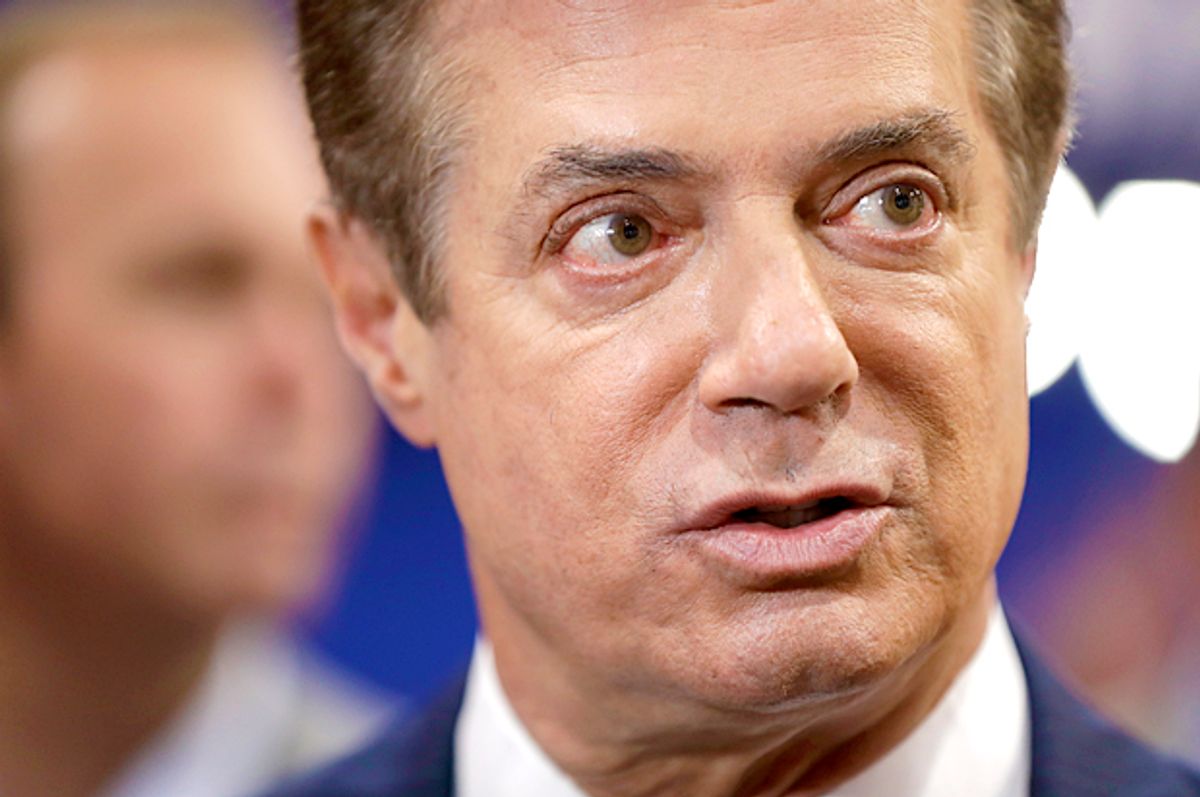 Consider the plight of Poor Paul Manafort, if you will. He had a really, really bad week last week, but then Poor Paul has had a pretty bad summer. Last week, it was revealed that New York Attorney General Eric Schneiderman has been working in conjunction with Special Counsel Robert Mueller investigating Manafort’s financial transactions. This came on the heels of news that the FBI conducted a pre-dawn raid in early August on Manafort’s home in Northern Virginia in search of financial records, which was preceded by the revelation the previous month that Manafort was in attendance at the notorious Trump Tower meeting between Donnie Junior, Kushner and various representatives of Russian oligarchs and Moscow intelligence services.

Aaaaahhh, and to think that only a year ago Poor Paul had been High Flyin’ Paul. He had joined the Trump campaign in March of 2016, been named campaign manager in June, ran the Trump campaign’s takeover of the party at the convention in July, and was on his way to presiding over Trump’s election victory in November when it was revealed in late August that he had received as much as $12.7 million in illegal payments from the party of Ukrainian President Viktor Yanukovych and was fired.

You could deploy an army of clichés here, beginning with what happens to those who fly too close to the sun wearing wings of wax, but something far more mundane appears to have been at work with Manafort and others in Trump’s orbit. Get too close to the Crapper in Chief, and you’ll end up covered in shit.

T’wasn’t always that way. Here was an apparently average Republican party hack in Washington, D.C. who had ridden the coattails of his connections to a very, very lucrative living paddling his party pirogue through The Swamp. He had worked on the presidential campaigns of Gerald Ford, Ronald Reagan, George H.W. Bush and Bob Dole, and parlayed those mundane travails into a lucrative business as a Big Time Lobbyist, working at times over the years for such foreign luminaries as Philippine dictator Ferdinand Marcos; Congolese butcher Mobutu Sese Seko; Angolan machete slasher Jonas Savimbi; and most recently, Ukrainian president and keeper of his own personal zoo Viktor Yanukovych. All of this lucrative lobbying required being registered with the Justice Department as a foreign agent, but Manafort had managed to soar above such boringly conventional legal requirements until he became associated with the Trump campaign and began attracting attention. He registered retroactively last June, just before the Republican National Convention. He should have taken that unwanted attention and his need for retroactive ass-covering as a warning and cooled it, but not High Flyin’ Paul!

In addition to his profitable lobbying business, Manafort had taken a page out of his friend Donald Trump’s playbook and was dabbling at top speed in the lower regions of the New York real estate market. Between 2006 and 2013, Manafort bought no less than four residential properties in New York City using Limited Liability Corporations. Real estate records do not indicate that they were bought using mortgages, leading to the conclusion that Mr. Manafort — the alleged recipient of so much Ukrainian funny-money — paid cash. So what did Manafort do, as he flew beneath the radar in his pre-Trump days? Why, he transferred ownership of the homes into his own name and took out a series of mortgages, that’s what he did! He took out a total of $19 million in “home equity” mortgage loans on city properties over the last five years. He bought one home in Brooklyn’s Carroll Gardens for $3 million four years ago, and took out a $7 million mortgage against the house on January 17 of this year, just three days before Trump’s inauguration. How the Brooklyn property increased in value by more than $1 million a year over four years is anyone’s guess, but perhaps it helps to know that the bank issuing the loan was run by Steve Calk, a Trump economic adviser and fundraiser who runs Chicago-based The Federal Savings Bank, with assets of over $4 billion.

High Flyin’ Paul wasn’t finished, however. The day after he left the Trump campaign, Manafort formed Summerbreeze LLC, a holding company, which only days later took out a $3.5 million mortgage on his estate in tony Bridgehampton. The loan was made by a subsidiary of Spruce Capital, founded by one Joshua Crane, a frequent partner of — you guessed it! — Donald Trump, on real estate deals. Spruce Capital is partially funded by one Alexander Rovt, a Ukrainian American born in the Ukraine, who made a fortune buying and selling fertilizer plants in the eastern bloc after the fall of the Soviet Union, often in conjunction with Kremlin connected oligarchs close to Vladimir Putin. Eventually Rovt, tired of the smelly fertilizer business in the steppes of garden spots like Bulgaria and Turkmenistan, sold out, bought the Bankers Trust Building in New York City for a tidy little $303 million in cash and now owns — you guessed it again! — about 280 buildings in the city.

Now Manafort-linked bank accounts on the Mediterranean island of Cyprus are under heavy investigation for money laundering. Manafort was connected to 10 companies doing business on Cyprus and at least 15 bank accounts, according to sources tapped by NBC news. One of the Cyprus companies, PEM Advisors Limited, was linked to Oleg Deripaska, a Russian Oligarch close to Vladimir Putin who was once denied entry into the U.S. because of ties to Russian organized crime.

Then came the call from the 26th floor of Trump Tower to High Flyin’ Paul’s Trump Tower condo to join the campaign and help drain the swamp through which he had been so happily paddling for so many years. And then came the fateful 2016 meeting between Donnie Junior, Slick-Boy Kushner, Manafort and the gaggle of Russian spies and lobbyists. Apparently Manafort made a note on his cell phone somewhere — this is what comes from sitting in a meeting holding your fucking phone, dumbass — to the effect that "donations" were discussed in the same sentence, or the same paragraph, or the same moment, or the same something anyway, as the Republican National Committee. Woopdedoo! Now we know that in the meeting with suspected Russian spooks straight out of "The Spy Who Came In From the Cold," which was advertised in a stream of emails as the Russian government wanting to help the Trump campaign with negative information about Hillary, they apparently also discussed throwing some money Trump's way. Wow. As if Trump hadn't spent the last decade with a fly rod in his hand fishing in the Moscow pond not for Permit fish (found in the clear waters of the Florida Keys) but for actual permits to build some monstrosity with his name on it within sight of the Kremlin.

So sitting somewhere in a conference room today, surrounded by $1,000 an hour lawyers in regimental striped braces and rep ties, is Poor Paul Manafort. Along with Trump lawyer Michael D. Cohen and Jared Kushner, who are lawyered-up and will be facing congressional investigators soon, Poor Paul is learning the same very, very expensive and very, very tough lesson a whole bunch of other Trump factotums are learning. That is, if you were stupid enough to cozy up to the Trump campaign anytime last year — in its early days, around the time of the convention, or later in the fall, when balloons fell from the ceiling and wads of bucks started changing hands big-time, you were going to get covered in a special kind of shit: exclusive, gold-leafed, red hat shit — indictment-heavy, stink-ass fucking Trump shit. Poor Manafort. All he had to do was stay on his own goddamned floor in Trump Tower and not venture down to the 26th floor where all the funny-money Russian intelligence operative meetings were taking place, and he could have spent the rest of his life withdrawing cash from the Ukrainian mob money he had squirreled away on Cyprus, flying on Gulfstreams, and sipping minty cocktails and caressing the tail ends of comely bikinied little things on the fly bridges of yachts off Capri.

But no, High Flyin’ Paul got on a Trump Tower elevator, and now he’s Woe is Me Paul, and he’s covered in Trump shit.