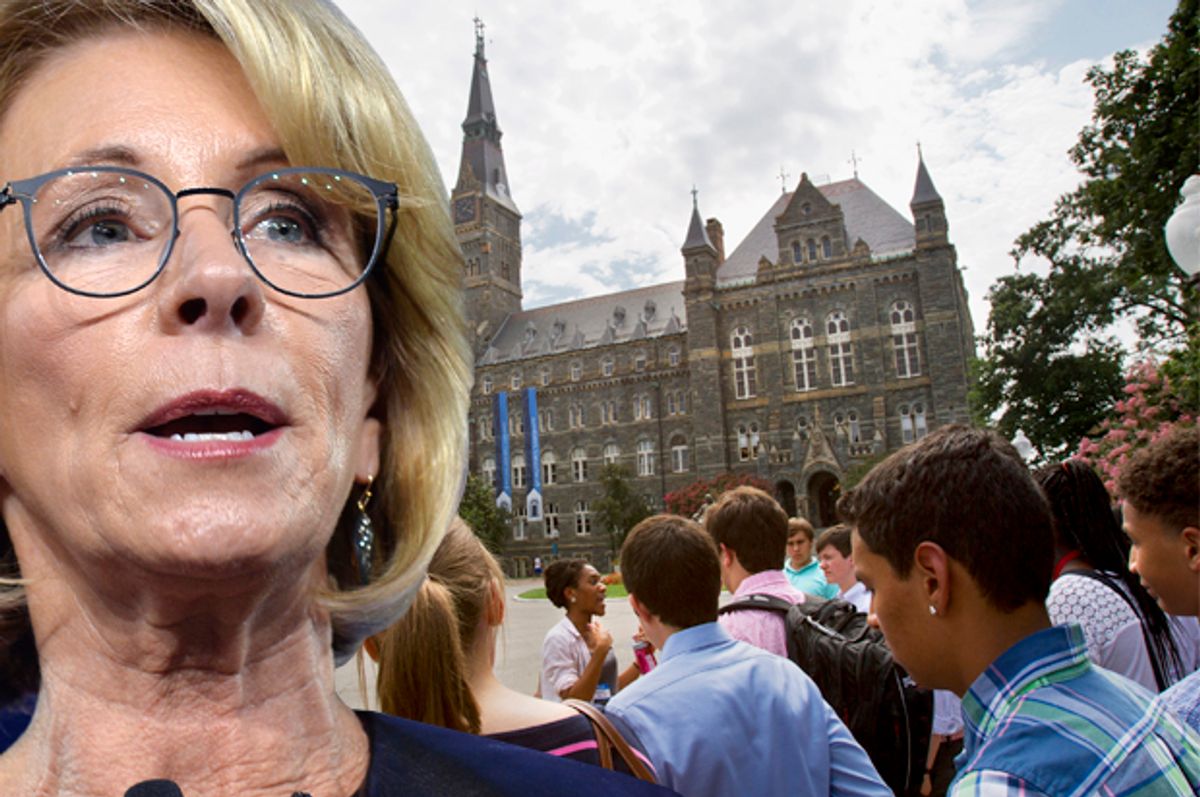 Education Secretary Betsy DeVos announced on Thursday that there would be major policy changes to Obama-era guidances regarding sexual assault on college campuses, making clear that President Donald Trump's administration would seek to protect both victims and those who are accused equally.

"Through intimidation and coercion, the failed system has clearly pushed schools to overreach," DeVos said during her address at George Mason University. "With the heavy hand of Washington tipping the balance of her scale, the sad reality is that Lady Justice is not blind on campuses today." DeVos accused the Obama administration of “weaponizing” the Office of Civil Rights to “work against schools and against students,” while calling out schools who employ such a broad definition of “sexual assault” to punish students and faculty for “simply for speaking their minds or teaching their classes.”

To ensure "students are not charged by school-based tribunals on the basis of hearsay or incomplete evidence,” DeVos called for a “Regional Center model” to investigate and adjudicate allegations of campus sexual assault. According to one widely-cited survey, 1 in 5 women experiences sexual assault in college.

“The rights of one person can never be paramount to the rights of another,” she insisted, pointing to a handful of lawsuits filed by those who claim they were unjustly punished for sexual misconduct on campus. "[N]o student should be forced to sue their way to due process," she added.

DeVos quickly received criticism from advocates for assault victims, such as the National Women's Law Center. In a statement, the organization said DeVos's plan to rewrite campus sexual assault guidelines were "a blunt attack on survivors of sexual assault," according to the New York Times.

"This is another cruel, heartless move from the Discrimination Administration," Mara Keisling, executive director of the National Center for Transgender Equality, said in a statement. "President Trump and Secretary DeVos are inviting schools to return to the days when survivors were shamed, blamed, ignored, and abandoned. Make no mistake: Title IX is working, and the only reason for this move is to legitimize discrimination and promote dangerous myths about rape."

DeVos described the current system as one that has "run amok" and referenced campus sexual misconduct hearings as, "kangaroo courts." According to DeVos, administrators were forced to act as "judge and jury." NPR elaborated on the recent history of Title IX guidelines:

Title IX, a federal law passed in 1972, prohibits sex discrimination in education. It has been best known for driving the expansion of girls' and women's sports.

The Office of Civil Rights, or OCR, under President Obama took the position that Title IX protects girls and women from the threat of sexual assault, harassment or a hostile environment while pursuing their educations.

In letters and official guidance, OCR told colleges and K-12 schools to investigate complaints more aggressively. Some of the consequences have been controversial across the political spectrum.

They were told to adopt a "preponderance of the evidence" standard, a lower burden of proof than is typically required in a court of law.

And, OCR stepped up its own investigations of campuses over Title IX complaints. If colleges didn't comply, they stood to lose access to federal student aid, which almost no school can afford to do.

"In essence, schools would hold accused students responsible if more than 50 percent of the evidence pointed to their guilt," the Times reported. "Previously, many universities had required 'clear and convincing' evidence to substantiate an accusation, meaning that the claim is highly probable."