Climate change is making storm effects worse, but even in this terrifying season Trump wants to slash regulations 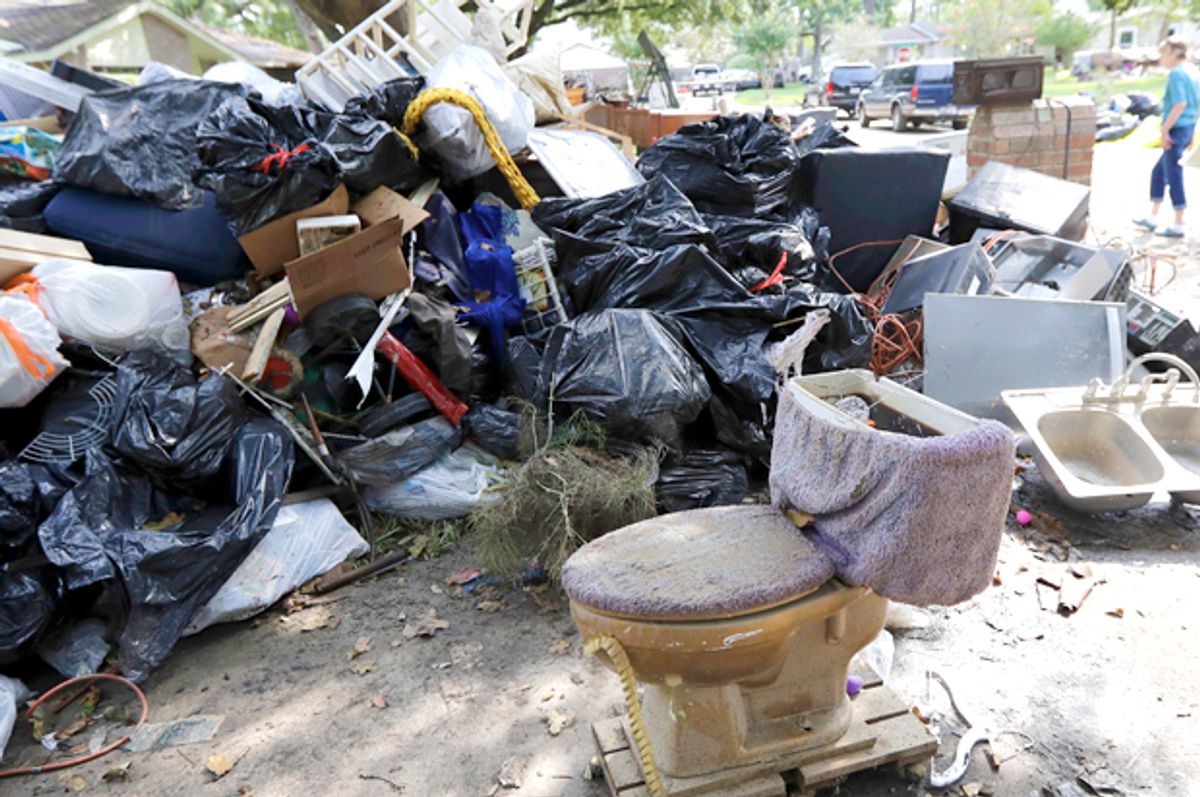 Pile of debris removed from a home that was damaged by Hurricane Harvey floodwaters (AP/David J. Phillip)
--

The floodwaters of Hurricane Harvey, which dumped an unprecedented 52 inches of rain on Houston, are only now receding, but already Hurricane Irma, a Category 5 storm larger than the state of Michigan, is slamming the Caribbean islands and threatening not just Florida but possibly neighboring states as well. Climate change, which scientists have long predicted would make storms bigger and more dangerous, is here.

Unfortunately, the aftermath of Harvey shows that a conservative culture of climate change denial and hostility to regulation not only contributes to the causes of climate change, but is making it nearly impossible for communities like Houston to make the changes to infrastructure and industry that are necessary to deal with the realities of 21st-century extreme weather.

“Harvey offered a very frightening preview of the damage that storms will cause the coastal communities because of climate change," said Shaye Wolf, climate director for the Center for Biological Diversity. "Unfortunately, in the short time that the Trump administration have been in office, they have made communities more vulnerable to disasters like Harvey through a series of rollbacks of environmental protections and proposed budget cuts and failures to fill key posts in federal safety and scientific agencies.”

Last week, the Center for Biological Diversity released a report chronicling Harvey-related air pollution in the Houston area. They found that more than 5 million pounds of pollutants from refineries and petrochemical plants were released due to the hurricane. One million pounds of especially dangerous chemicals, some of which are carcinogenic, were emitted from oil industry giants like Exxon and Chevron after their facilities were flooded.

That amount of toxic pollution is bad under any circumstances, but Kristina Costa, a climate change expert at the Center for American Progress, explained that for years Houston has "had some of the worst air pollution problems in the country," which are made worse "by the actions that the [Scott] Pruitt EPA has been taking to roll back or delay the implementation of common-sense public health protections."

“The communities that have been living around those facilities have been saying for years that the regulatory frameworks to protect people from the negative aspects of petrochemical industry are not adequate," explained Juan Declet-Barreto, a fellow for the Union of Concerned Scientists.

"During and after Hurricane Harvey, a lot of communities have been reporting pungent smells and respiratory irritation," Wolf added. "This is a big public health concern.”

Prior to Harvey, Houston already had a major problem with respiratory illnesses, especially asthma, related to the high levels of air pollution. But the state of Texas' response to this issue has been disturbingly inadequate. In 2017, for instance, Republican legislators redirected $20 million from a program designed to improve air quality in Texas toward a program aimed at shaming women considering abortion.

What especially concerned the experts I spoke with was that the Trump administration appears indifferent, if not outright hostile, to any efforts to protect against the increasing dangers from extreme weather events like tropical storms and hurricanes.

In 2013, Barack Obama signed an executive order requiring chemical plants and surrounding communities to take steps to reduce the risks of industrial accidents and mitigate them better when they do happen, a move Declet-Barreto described as inadequate but "a step in the right direction." Unfortunately, the Trump administration has delayed implementation of this order, a choice that contributed to the pollution problems after Harvey.

Declet-Barreto wrote at the Union of Concerned Scientists webpage about the explosion at the Arkema chemical plant near Houston that followed Harvey, emitting huge amounts of dangerous chemicals into the air. That plant, he reported, was "one of many facilities that under the now-delayed [Risk Management Program] amendments would have had to research safer technologies and chemicals to limit the effect of a disaster or explosion on surrounding communities and workers."

Wolf ticked off a number of alarming moves made by the Trump administration prior to the hurricane: In March, Trump rescinded an Obama executive order asking government agencies to prepare for the effects of climate change. Two weeks before Harvey, Trump ended an Obama order aimed at strengthening coastal infrastructure to withstand climate change. Trump has also pushed for cuts to FEMA, NOAA and HUD that would help rebuild and protect against damage from bigger and wetter storms.

The effects of pollution from Harvey "are going to be felt by Houstonians for not just months, but for years to come," said Costa.

Both Wolf and Declet-Baretto noted that this just isn't about air. There were also wastewater overflows and emissions from the petrochemical and oil industries that have permeated floodwaters, soil and both public and private property — where toxic chemicals will linger long after the waters completely recede.

Then there are the Superfund sites, areas the EPA has flagged as having dangerous pollution levels that require extensive cleanup. Because of decades of industry activity, coupled with an inadequate regulatory framework, there are 41 Superfund sites in the Houston area — and 13 of them flooded in ways Declet-Baretto worried would disperse toxic pollutants "around the waterways and outside of the specific parcels of land [where] they were located."

Trump's EPA head, Scott Pruitt, is a climate change denier and a friend and supporter to polluting industries. Well before Harvey, Houston-area activists were already alarmed at Pruitt's plans to cut the budget for toxic cleanup. Fears about Pruitt's indifference have only increased in the wake of the big storm, when the Associated Press reported that the EPA was not on the ground at the Superfund sites. The EPA claimed the sites were inaccessible, but AP reporter Michael Biesecker proved he was able to get to seven of the 13 flooded sites.

In a Trump-like move, the Pruitt-led EPA then lashed out at AP, putting out a press release demonizing the AP reporters, even though the EPA couldn't refute any of the facts they had reported. This behavior does little to quell widespread concerns that Trump and his administration are not concerned about the well-being of people who live near oil refineries and petrochemical plants.

"The fossil fuel industry is the wealthiest industry in the world’s history," Wolf said. "They should be required to spend the time and the money to put in the proper pollution control measures and proper safety precautions to reduce the risk to surrounding communities."

Unfortunately, it doesn't seem that even the arrival of two massive hurricanes in a single season — which, if Irma hits the U.S. mainland, will be the first time that has happened in our country's history — is enough to convince Trump and his administration that climate change is real and that protecting the people from its worst effects is more important than protecting oil and chemical industry profits.