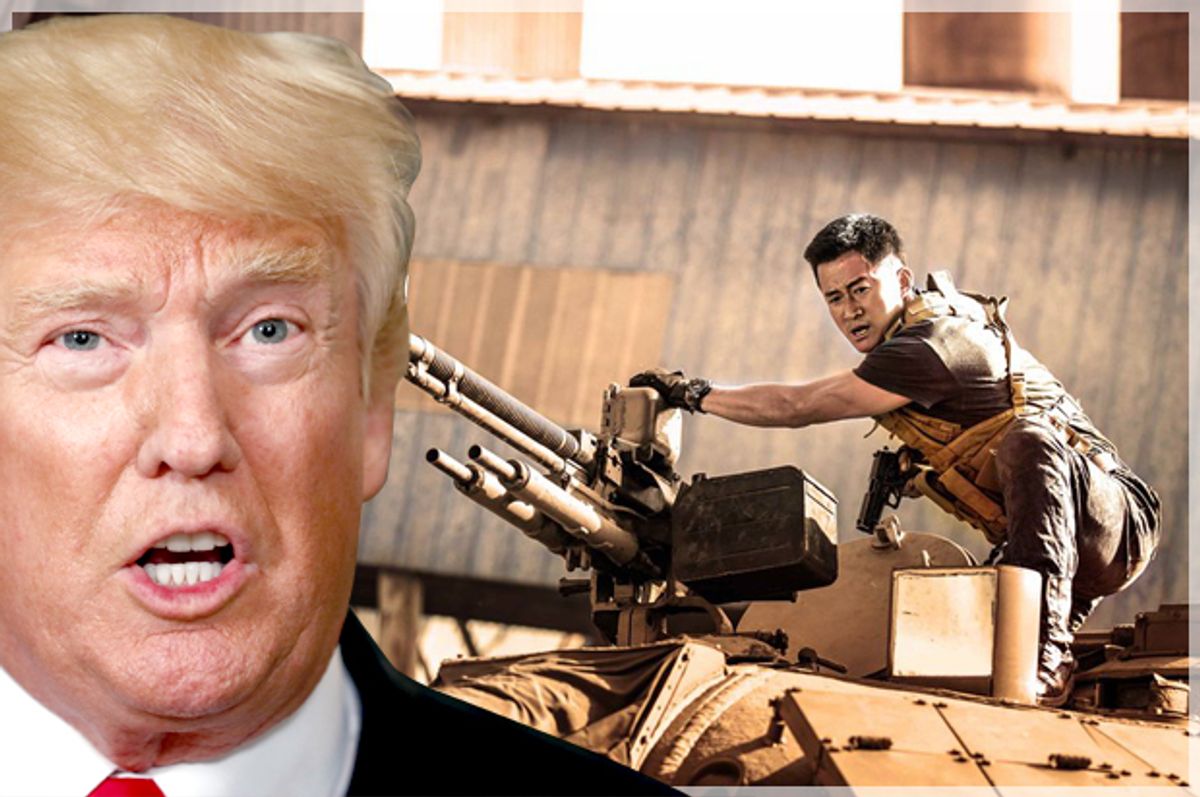 For all the handwringing over the lousy summer box office, there’s been one huge success. Here’s a hint: a super hero travels to a foreign land, gets involved in a foreign war, and triumphs. Here’s another hint: WW.

No, not “Wonder Woman,” although that movie grossed $406 million domestically and $806 million worldwide. I’m talking  directed by and starring Wu Jing as ex-special ops soldier Leng Feng, who fights western mercenaries to save locals and Chinese nationals in a fictional African country. It was released on July 27. It’s been shattering box office records in China ever since.

Now “Wolf Warrior II” has shattered that record again, grossing $848 million (and counting) in China alone. Only one movie has ever grossed more in a single market: “Star Wars: The Force Awakens,” which earned $936 million in the U.S. in 2015. “Wolf” has done so well domestically that it’s become the first non-Hollywood movie to enter the top 100 films in terms of worldwide gross. It’s 57th with a bullet. It just passed “Wonder Woman.” (Numbers via Box Office Mojo)

The movie’s vibe is distinctly 1980s-era Sylvester Stallone. Leng Feng is a muscled, ex-military superpatriot who kicks ass abroad the way Rambo did, and drapes himself in the flag the way Rocky did in “Rocky IV.” If you think of those Stallone movies as an assertion of American manhood against Soviet political oppression, the Wu Jing movies are like an assertion of Chinese manhood against American cultural oppression. Despite the movies’ ostensible villains (an Asian drug lord in “Wolf Warrior” and an African rebel leader in “II”), Leng Feng’s real battles are with western mercenaries who belittle the Chinese. “You’re nothing but a bunch of boy scouts,” sneers Tomcat (Brit martial artist Scott Adkins) in “Wolf Warrior.” “People like you will always be beaten by people like me,” sneers Big Daddy (American martial artist Frank Grillo) in “II.”

Here, the West fights for money, not country, and flees when civil war breaks out. “From the dock,” Leng Feng tells a feisty Chinese-American doctor (Hong Kong actress Celina Jade), “I saw a Stars and Stripes flag among the countless masts heading into the distance.” Indignant, she calls up the U.S. consulate . . . and gets a recording: “We are closed.” But while others are fleeing, China steams into port. It is policeman of the world now.

And it’s recognized and respected as such. At the end, our bruised and bloodied rag-tag group of Chinese nationals and African locals are driving to safety when they are blocked by a firefight in a small town. Do they search for a way around? No. Leng Feng simply puts the Chinese flag on his arm — he literally wears the flag on his sleeve — and as they drive it unfurls behind him majestically. “Hold your fire!” the African soldiers shout. “It’s the Chinese!”

So yes, comparisons with Stallone and “Rambo” are in order, but it’s worth pointing out the differences at the box office. The most popular Rambo movie, “First Blood — Part II,” was certainly a hit, and, with “Rocky IV,” a Reagan-era cultural touchstone, but it didn’t exactly break all-time domestic box office records. It wasn’t even the highest-grossing film of 1985 (That distinction belongs to “Back to the Future,” which grossed $210 million against Rambo’s $150). More, the four Rambo pictures, for all of their rah-rah patriotism, actually did better abroad than in the states: $443.8 million vs. $294.1 million. That’s not the case with “Wolf II.” Its $848 million domestically dwarfs the $5 mil it earned internationally. The movie about Chinese power abroad, ironically, is only powerful at home.

But why is it so powerful at home? And why now? That’s the question everyone seems to be asking.

Is it the “rising tide of Chinese nationalism” as so many western commentators are saying? Maybe. Except the just-as-superpatriotic “Wolf Warrior” came out two years ago and grossed only $81 million. More, where was that rising nationalism last year when the No. 1 box-office hit was an environmentally conscious romantic comedy about a mermaid? What’s changed since 2016 that would make China flock in such huge numbers toward a superpatriot?

Before I address all that, a few caveats. I get the difference between the box-office circumstances of the two “Wolf Warrior” movies. The first opened in 2015 in late March — not a great time for moviegoing — and was swamped a week later by “Furious 7.” The second not only opened in the more lucrative summer months but during a state-sanctioned blackout period of foreign releases — a protectionist policy designed to encourage attendance at Chinese-produced films. As a result, the only Hollywood competition “II” had when it premiered was the fourth weekend of “Despicable Me 3;” then nothing for a month.

Let me also acknowledge that “Wolf Warrior II” has great production values, huge explosions, a charismatic lead, and a kick-ass opening number in which, in a single shot, we see Leng Feng dive off a freighter being hijacked by Somali pirates, upend a hijacker inflatable, fight them underwater, then pull himself into one of the inflatables, pick up a rifle, and take out the lead hijacker with a crack shot from a hundred yards away. Cue credits.

I’m also well aware of the danger of assuming everything has to do with, you know, us.

That said, it’s fascinating to see exactly when “Wolf Warrior II” took off at the box office in unprecedented ways. Here’s how Scott Mendelson at Forbes describes it:

“Wolf Warrior II” opened . . . with a huge, but not necessarily record-setting $136m. That's fine and dandy, even with the mere 15% drop from Saturday to Sunday and a 2.9x weekend multiplier. But then the picture earned $41.5 million on Monday, $42 million on Tuesday, $41.4m on Wednesday and $31.6m on Thursday, giving it a week-long $307.3 million running total and a Monday-Thursday total ($156 million) larger than the film's opening weekend. And it made another $161 million in its second weekend, a jump of nearly 12% from its debut.

After Thursday, Friday and Saturday, in other words, “Wolf Warrior II” suddenly kicked into a gear never seen in movie history. Was this just word-of-mouth for a quality product? Or did something happen during that first weekend that might’ve nudged the film into stratospheric territory?

And here’s where we get to Donald Trump.

Trump has never exactly been a friend to China. In 2012, he tweeted that the concept of global warming was “created by and for the Chinese in order to make U.S. manufacturing non-competitive,” and during the 2016 campaign he repeatedly blamed China for “taking our jobs.” In one of his first acts as president-elect, he took a phone call from the president of Taiwan — a slap in the face to the mainland — and as president he’s continued to rail against the U.S. trade deficit with China, saying in May, “We can’t continue to allow China to rape our country.”

Then there’s how he’s harangued China over North Korea. And on July 28, during the opening weekend of “Wolf Warrior II,” the president of the United States made these belittling comments on Twitter to the world’s most populous nation:

I am very disappointed in China. Our foolish past leaders have allowed them to make hundreds of billions of dollars a year in trade, yet...

...they do NOTHING for us with North Korea, just talk. We will no longer allow this to continue. China could easily solve this problem!

Both tweets went out Saturday afternoon, which is Sunday morning in China. A day later, Xinhua, China’s state-run news agency, offered a public rebuke of the president. It suggested he stop “venting” on Twitter, and that the U.S. “must not continue spurning responsibility [for North Korea], and even less should it stab China in the back.”

Again, it was exactly at this moment that box office for “Wolf Warrior II” went ballistic.

There’s no way of knowing if Trump’s comments had an effect on the huge financial success of “Wolf Warrior II.” But if you’re a Chinese moviegoer, in this atmosphere, which movie would you rather see? A romantic fantasy about the goddess of the heavenly realms? The third, overdone “founding of China” movie? Or the one where the Chinese superpatriot kicks the ass of the pompous, belittling American?

If true, the irony is overwhelming. The bluster of the self-proclaimed “businessman president” would have helped reveal the power of the Chinese marketplace and its protectionist policies at the very time Hollywood studios are trying to negotiate a better deal with China. Not exactly Make America Great Again.