From the debt limit to DACA, Trump defies GOP leaders and sides with Democrats, desperately seeking a win 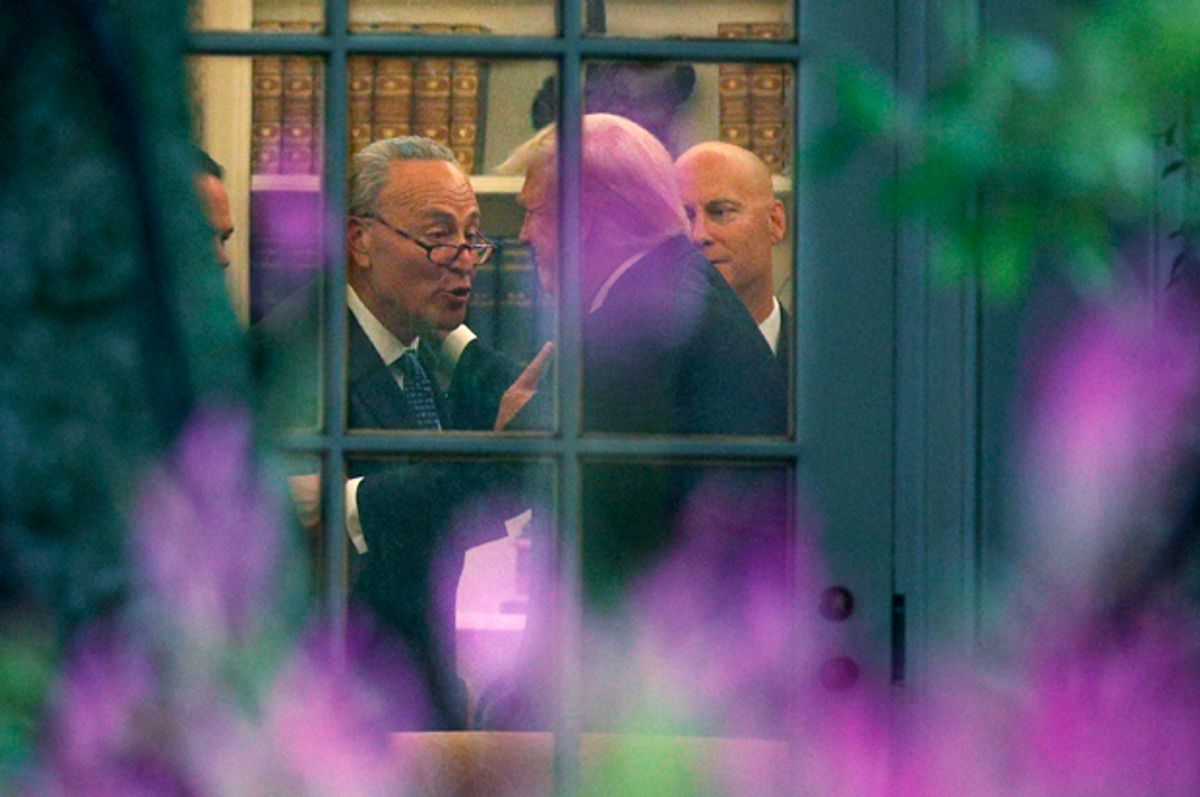 Displaying the kind of negotiating skills you can only learn from "The Art of the Deal," Donald Trump has apparently defied congressional Republicans to side with Democrats in calling for a three-month debt ceiling increase -- kicking Washington’s favorite can further down the road.

Democrats cleverly used the president’s desperation to demonstrate that he can strike deals across the aisle against him, leading Trump to back Nancy Pelosi’s and Chuck Schumer’s endorsed plan to avoid defaulting on the nation’s debt over the objections of Republicans like Paul Ryan and Mitch McConnell.

Trump also informed his fellow Republicans that he will likely eventually cave on DACA, allowing Congress to codify protections for undocumented immigrants brought to the U.S. as children into law. Trump had earlier rescinded an executive order signed by former president Barack Obama, setting a six-month deadline for Congress to act on a replacement.  "Chuck and Nancy want to see something happen and so do I," he told reporters aboard Air Force One on Wednesday, after meeting with the Democratic leaders. "If they don’t,” Trump added in his only reference to the Republicans who control both chambers of Congress, “we’re going to see what we’re going to do."

Only a few hours after GOP House Speaker Paul Ryan called the 3-month debt limit a "ridiculous idea," Trump agreed to a clean extension of the debt ceiling without forcing Democrats to fight to secure funding for Hurricane Harvey aide. Republican leaders had wanted Harvey funding plus a debt ceiling increase to 2019, with conservative Republicans hoping for spending reforms to also be attached. Some Freedom Caucus members wanted a January expiration. Instead, Trump left them hanging and facing a brutal year-end fiscal cliff. It will be interesting to see if Ryan will now publicly disagree with Trump.

Initially, Republican leaders pushed for an 18-month extension on the debt limit, then 6 months. After Democrats balked, however, Trump agreed to only 3 months. Democrats did not have to give up anything, it seems, to secure Harvey aid and the temporary debt limit increase. A shutdown fight in the midst of Harvey aftermath centered around an immigration fight certainly had the makings of a PR disaster for Democrats, but Trump saved them the fight.

Democrats, on the other hand, used the occasion to highlight the division and infighting that has stifled a GOP with complete control of the federal government. “Given Republican difficulty in finding the votes for their plan, we believe this proposal offers a bipartisan path forward to ensure prompt delivery of Harvey aid as well as avoiding a default, while both sides work together to address government funding, dreamers, and health care,” Schumer and Pelosi said in a statement after meeting with Trump on Wednesday.

In a Pew poll published less than a year ago, 72 percent described it as "somewhat important" or "very important" that the country "allow those who came here illegally as children to remain here," while 62 percent said they want a "way for most immigrants currently here illegally to stay legally."

Advertisement:
But the irony of Trump's selling out to the Democrats is that infuriated Republicans will take out their frustration on Ryan and McConnell, who are in real jeopardy now. Like with his decision on transgender troops in the military, Trump has avoided another sticky negotiation by kicking the immigration and debt limit debates to Congress without figuring out what to do and how to do it. The art of the deal takes real negotiation, and Trump can't be bothered to roll up his sleeves to tackle the wonky policy details -- leaving Republicans to hold the bag on the losing end of everything.