Leading Republicans have fled from Trump's racism. But their party has been a white-identity club for 50 years 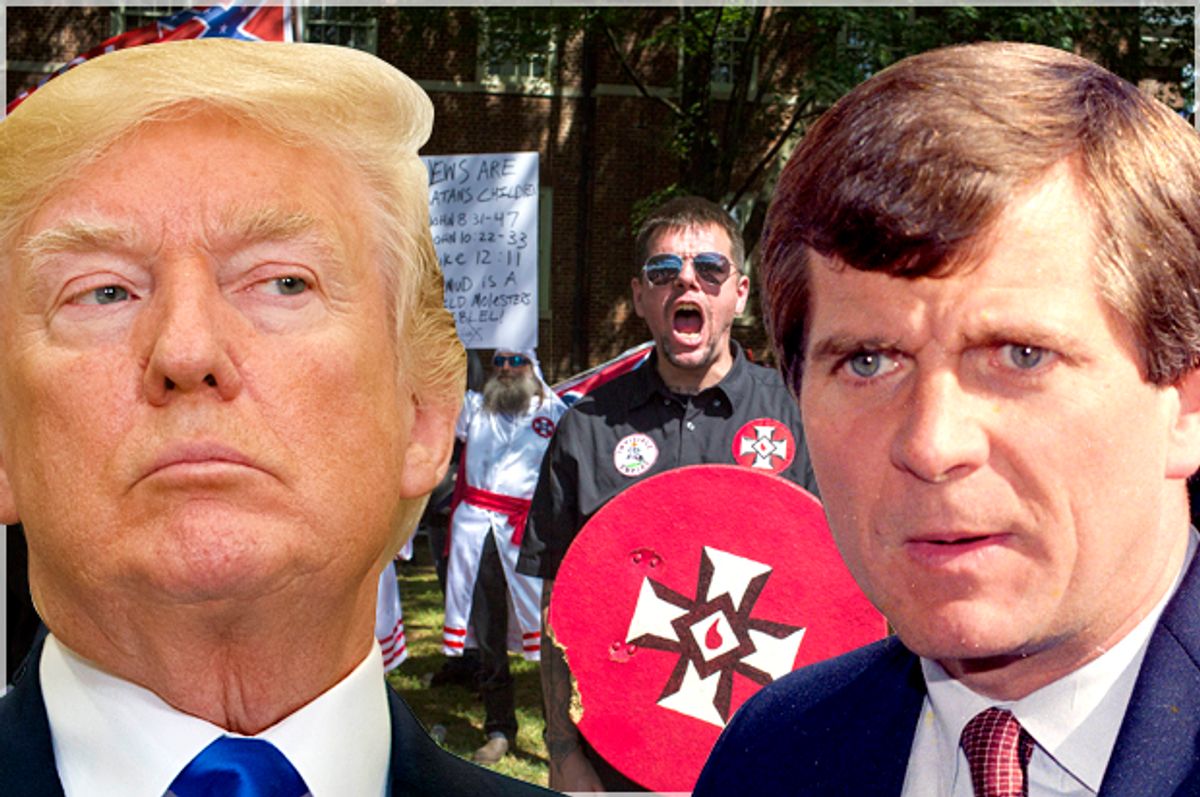 Racism calculus is not difficult. It is organized around several basic principles. They are:

Racists do racist things intentionally. They often do things that superficially appear to be "colorblind" or "race-neutral" but in practice lead to racist outcomes.

Racists support other racists. Racists believe that they are good people.

Racists think their attitudes and beliefs are "natural" and uncontroversial.

When confronted about their racism, racists often claim that they are the real "victims" whose "free speech" is being taken away.

Donald Trump is an honors student in racism and white supremacy. He is not a genius or a savant. Rather, Donald Trump is just very earnest and practices almost every chance he gets. Trump has many fellow students with whom to study and practice in the Republican Party.

To that end, his most recent efforts: Trump has apparently ended the DACA program (while sending deliberately mixed signals to different audiences), in order to punish Latino and Hispanic young people who were brought here as children and have spent most of their lives as Americans.

Donald Trump coddles and protects neo-Nazis and white supremacists -- a group he has insisted includes "very fine people." Trump has encouraged America's police to brutalize "suspects" (implicitly black and brown people). He has ordered the Department of Justice to investigate whether America's colleges and universities discriminate against white people.

Donald Trump is also leading a concerted effort to keep African-Americans and other nonwhites from voting.

In an effort to publicly distance themselves from Donald Trump's overt racism, leading Republicans have issued mealy-mouthed, half-hearted condemnations of his behavior.

After Donald Trump's defense of the neo-Nazis and white supremacists who rampaged in Charlottesville several weeks ago, the Republican National Committee issued a condemnation of those hate groups which read: "The racist beliefs of Nazis, the KKK, white supremacists and other like-minded groups are completely inconsistent with the Republican Party’s platform.” The resolution continued by claiming that “the view that the color of one’s skin determines or should determine one’s standing, rights, opportunities, or duties to others is not consistent with the philosophy of the Republican Party.” The RNC's statement added: “The racist beliefs of the Nazis, the KKK, white supremacists and others are repulsive, evil, and have no fruitful place in the United States.”

This was a pure form of hatred, this notion that some human beings are intrinsically superior to others ... that whole concept is wrong, evil. We need to be very clear about that … I worry that we’re going to get this normalized in our society. We have to be outraged every single time, so they never occupy normal space in our civil dialogue or civil space in our country.

These are acts of political evasion. The Republican Party's supposed efforts to condemn racism and white supremacy are a preposterous, pathetic, dishonest, hypocritical joke. In reality, the Republican Party of the post-civil rights era is the United States' largest white supremacist and white identity organization. Its political currency is white grievance politics. For Republican politicians and strategists -- and for conservative leaders more generally -- racism is a version of Chekhov's gun that they cannot resist using at almost every opportunity. Consequently, the party of Abraham Lincoln is now the party of Jefferson Davis and the Confederacy. In 1981, leading Republican strategist Lee Atwater directly explained how this transformation took place:

You start out in 1954 by saying, “Nigger, nigger, nigger.” By 1968 you can’t say “nigger” — that hurts you, backfires. So you say stuff like, uh, forced busing, states’ rights, and all that stuff, and you’re getting so abstract. Now, you’re talking about cutting taxes, and all these things you’re talking about are totally economic things and a byproduct of them is, blacks get hurt worse than whites. … “We want to cut this,” is much more abstract than even the busing thing, uh, and a hell of a lot more abstract than “Nigger, nigger.”

In many ways, Donald Trump's racist and fascist presidency is neither an outlier nor result of an insurgent political campaign: It is the inevitable (and predictable) result of the Republican Party's long march toward white supremacy.

There have been many stops along that proverbial road. The Republican Party is waging a war against the freedom and equal citizenship rights of black and brown Americans. This assault includes voter suppression, gerrymandering and undermining (if not ending) the protections enacted as a result of the civil rights laws of the 1960s.

The Republican Party has widely embraced conspiracy theories such as "birtherism," which it used to weaponize racist attitudes in the service of obstructing the agenda of Barack Obama, the United States' first black president.

Almost all of the Republican Party's domestic policy proposals on issues ranging from taxes to the environment will have a disproportionately negative impact on African-Americans, Latinos, Native Americans and other nonwhites.

The Republican Party and right-wing policymakers have consistently supported immigration "reforms" -- such as those proposed by Donald Trump several weeks ago -- designed to ensure that America remains a majority white country into the indefinite future.

Elected officials take signals from their voters. As such, the Republican Party's racism is a reflection of the values held by its supporters. Oublic opinion and other polling data has consistently shown that Republican voters are more likely to be racist than Democratic voters. Republicans and other conservatives are also much more likely than Democrats (and the general population) to believe that black people are less intelligent, more violent and lazier than white people. Republican voters -- especially those who support Trump -- also widely believe that white people are victims of anti-white racism. Republican voters en masse possess high levels of hostility towards Muslims, Latinos and other groups they consider "un-American".

Ultimately, it should be no surprise that Donald Trump's campaign and (now) presidency have received overwhelming support from the Ku Klux Klan, neo-Nazis, and other domestic terrorist and hate groups.

Donald Trump's campaign slogan "America first" has historically been used by the KKK (and other anti-Semitic groups). Moreover, one cannot reasonably ignore how similar the Klan's political platform is to that of the Republican Party.

This agenda is advocated for -- to a large extent, and in varying degrees -- by Donald Trump, the Republican Party, the right-wing media, and conservative policymakers in government as well as think tanks and interest groups. In total, the post-civil rights Republican Party shares many of the KKK's goals but has embraced other means of achieving them -- and in the age of Donald Trump the latter distinction is quickly eroding.

After the white supremacist terrorism in Charlottesville there was a moment of rare candor and truth-telling about the color line in America. Predictably, Trump bobbed and weaved before finally making excuses for the white supremacist mayhem that took place in that city. David Duke, the former Grand Wizard of the Ku Klux Klan, was quick to advise Donald Trump: "I would recommend you take a good look in the mirror & remember it was White Americans who put you in the presidency, not radical leftists."

Trump was brought to heel. He received Duke's message loud and clear, and proclaimed that there were "fine people" among the rioters and hate-mongers in Charlottesville. As Trump fights back against the Russia scandal and a general perception of his incompetence and stupidity, he has doubled down on his white supremacist policies in order to appease his most ardent supporters.

It is long overdue for today's Republican Party to drop the mask and put on their white sheets. To do that would be more honest and efficient than to go through the "post-racial," "colorblind" charade Republicans have been acting out for five decades. At least that con job has finally been exposed as such by the ascendancy of Donald Trump.