Seth MacFarlane's series wants to boldly go someplace. If only it could figure out where and why, and what it is 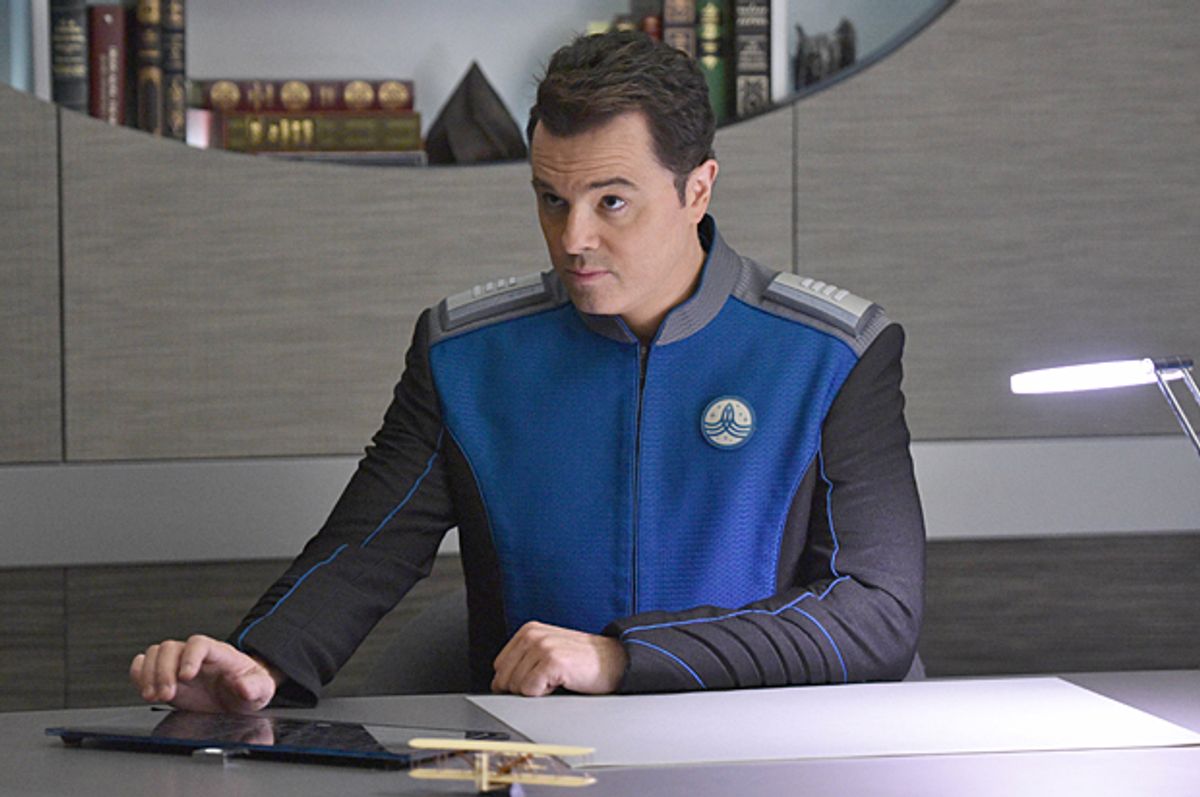 Seth MacFarlane as Ed Mercer in "The Orville" (FOX/Michael Becker)
--

Often fall’s influx of new series leads the viewer to ask many questions. Among the most popular are, “What is this?” “Should I watch this?” “Why did this happen?” And perhaps the most popular option, “Aren’t there better things to do with my time?”

Occasionally one show provides the magnificent opportunity to concretely answer all of these questions at once. Let us consider “The Orville,” Seth MacFarlane’s latest demonstration of his pull within the Fox empire as well as the entertainment industry at large, debuting Sunday at 8 p.m. Set 400 years in the future but intentionally loaded with colloquialisms from the present, “The Orville” is an obvious homage to “Star Trek,” specifically “The Next Generation,” and stars MacFarlane, creator of “Family Guy,” “American Dad!” and other series that you have already forgotten about, as Starship Captain Ed Mercer.

Ed’s leadership skills are nowhere near the caliber of those of Jean-Luc Picard or Kathryn Janeway or James T. Kirk or Benjamin Sisko or Peter Quincy Taggart or Captain Lone Starr. Those last two references are from “Galaxy Quest” and “Spaceballs,” two films unrelated to the “Star Trek” universe but whose relevance will be explained forthwith.

Part of the reason Ed’s abilities aren’t top-notch is because he experiences a terrible blow to his ego in the opening moments of the series premiere that compromises the quality of his work, leading him to shirk his duties. But proving that inept men continue to fail upward even centuries from now, Ed is awarded his own exploratory ship and a crew that includes his ex-wife Kelly Grayson (Adrianne Palicki), serving as his First Officer, as well as familiar faces and voices from MacFarlane’s oeuvre, including Scott Grimes and J. Lee, as well as Penny Johnson Jerald (“24”) and Chad L. Coleman (“The Wire”).

What exactly is this ocular assault?

This query gets to the heart of this show’s flaws. To be certain, “The Orville” demonstrates MacFarlane’s affection for the “Trek” universe and space-based sci-fi adventures down to the tiniest details. “Trek” producer Brannon Braga is a fellow executive producer on this series, and a person can feel his influence keenly in the more solemn of the three episodes provided for review. Even the score is a pastiche of melodies from each of Gene Roddenberry’s series in addition to motifs from John Williams’ “Star Wars” scores and James Horner’s compositions for “Aliens.” Nerds have much to be pleased about in its aesthetics.

A better test of any series’ quality is in its narrative and how well it fits, contributes to or innovates upon a genre, and this is where “The Orville” falls over. The hour-long series isn’t an extraordinary drama or an effective comedy. It’s not quite a spoof in the spirit of “Galaxy Quest” or “Spaceballs,” although there’s room for such a project on TV. (And soon enough, Amazon will step in to fill that void with a TV series version of “Galaxy Quest” penned by comedian Paul Scheer, who previously starred in “The League.”)

What it is, unquestionably, is a vehicle for MacFarlane to have a romp in an expensive set in a uniform that resembles Starfleet tailoring, but certainly isn’t, oh no, or else one presumes somebody would get sued. Be that as it may,  the show's primary directive seems to be to allow MacFarlane a venue to exercise his creative whims and questionable dramatic ability. MacFarlane is a tremendous voice actor but his physical expressiveness leaves much to be desired. Although “The Orville” utilizes an ensemble cast, MacFarlane draws the most share of attention as its lead, and he’s a weaker link among better players — particularly Palicki, who actually could have carried this thing on her own.

Should I watch this?

That largely depends on how you feel about MacFarlane’s glib sensibility. The flabbiest aspect of “The Orville” is its unwieldy attempt to marry humor and drama. Within its first three episodes are subplots patterned after the types of moral and philosophical quandaries that inspired parables within “Star Trek,” but these are surrounded by punchlines and rambling dialogue that, at worst, distracts.

Then again, viewers whose brains have grown accustomed to the slaphappy style of “Family Guy” may find a giggle or five in each episode. Beyond that, MacFarlane’s punchy verbal antics loses their verve.

Why did this happen?

It’s impossible to answer this question without engaging in speculation, albeit of the informed variety, but in case you haven’t noticed, MacFarlane makes mountain ranges of cash for Fox with “Family Guy” and other animated series. Because of this, if he comes up with a halfway interesting concept, the network is more likely to back his play than to pick up a legitimately original concept from a lesser-known producer. Denying MacFarlane is likely seen as a riskier option than affording him the opportunity to fail spectacularly.

Besides, some of his past efforts that didn’t work were worth doing, such as his resurrection of “Cosmos” with Neil deGrasse Tyson.

That’s still not a sufficient argument in favor of giving “The Orville” more than one episode’s worth of a chance, which would be generous.

Aren’t there better things to do with my time?

But there are plenty of better diversions on television airing in the same timeslot as “The Orville.” “Outlander” airs its season premiere on Starz — watch that. “South Park” is neck-deep in a marathon that feels like it’s been going on since the dawn of time. That’ll kill some brain cells.

What I’m saying is, feel free to seek out new life in whatever manner you see fit. Boldly go where you’ve never gone before. Go anywhere but here.