The future of tax reform could be in jeopardy after Trump struck a deal with the Democrats, leaving GOP blindsided 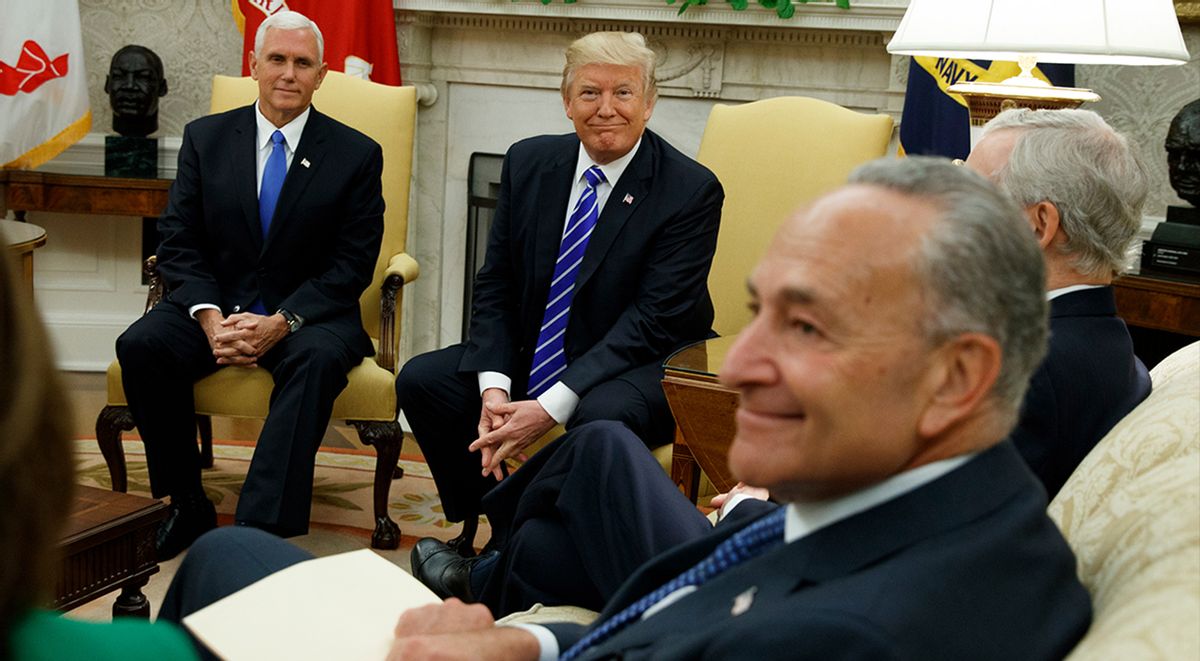 The director of the Office of Management and Budget, Mick Mulvaney, said that President Donald Trump is "annoyed" with top Republican leaders. However, Republicans felt blindsided by Trump's deal with the Democrats, and could jeopardize the future of passing tax reform — which Trump demanded happens swiftly.

"Is he annoyed at [Republican] leadership, yeah, I think he probably is," Mulvaney said on Fox Business Network, according to The Hill. "And believe me, as a Republican, so am I."

"I was promised that they would have repealed and replaced ObamaCare by now," Mulvaney added. "To the extent that the president was annoyed by that is simply reflecting many of the people of this country."

Congressional Republicans and the president appear to be at a crossroads after Trump struck a deal with Democratic leaders earlier in the week to provide immediate aid for Hurricane Harvey, and raise the debt ceiling for three months, which keeps the government running until December 9. Staunch conservatives were strongly against a "clean" raise, and wanted to also include spending cuts, the opposite of what Trump's deal accomplished.

The president's decision left a bad taste in the mouth of Republicans, who said on Friday that tax reform has become more complicated. "He saw a deal and wanted the deal, and it just happened to be completely against what we were pushing for," a GOP aide told the Washington Post, who claimed the president made a momentary decision.

"This kind of creates complications relative to tax reform," said Pennyslvania Rep. Ryan Costello, according to Reuters. "It seems to me that there’s an element of unpredictability from one issue to the next and this week is sort of a reflection of that."

"There was a lot of work going into how this was going to take shape in September. And that was entirely undermined … seemingly very spontaneously," he added.

Republicans ultimately fear that Trump's deal with the Democrats will allow them to "be able to use their negotiating clout in early December to resist changes on key tax issues, especially the corporate tax rate, which Trump wants to cut from 35 percent to 15 percent," Reuters reported.

Details on the president's tax reform are still scarce, and he even recently received criticism over his plan from loyal supporters such as conservative provocateur, Ann Coulter, who said Jeb Bush had better ideas.

Others feel that Trump is setting the stage to break more norms in Washington, and that his deal with the Democrats proves he's not loyal to any party.

"The truth is that he is a political independent, and he obviously won the nomination and the presidency by disrupting a lot of norms that Republicans had assumed about their own party and their own voters," Ben Domenech, publisher of the conservative website, The Federalist, told the New York Times. "This week was the first time he struck out and did something completely at odds with what the Republican leadership and establishment would want him to do in this position."

In terms of tax reform, some Republicans don't exactly have high hopes that something will be passed quickly, and have grown frustrated over the lack of details.

"My expectations are low. I think if they had something big they’d be floating elements of it now," Ohio Rep. Darrell Issa told Reuters.