Yes, it's really this simple: Donald Trump is a cranky, obsessive racist 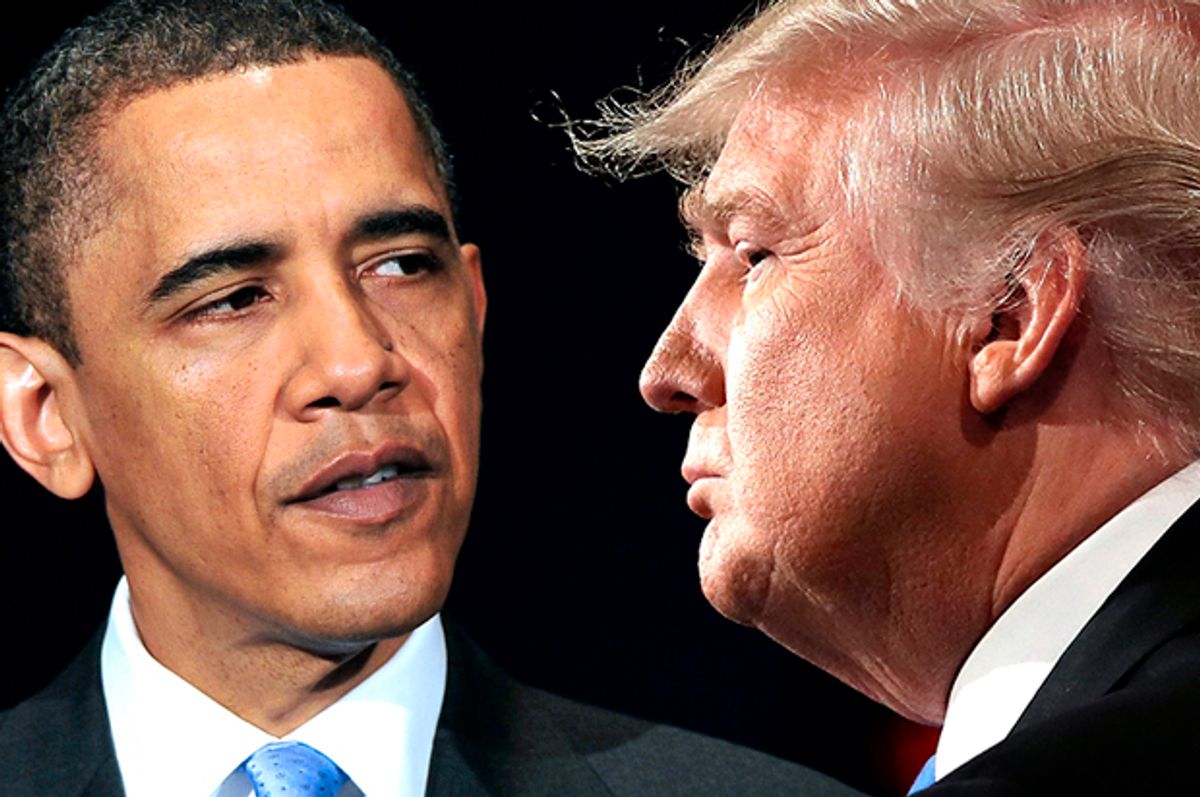 No one in the reality-based world can really deny, at this late date, that Donald Trump is a racist, but there continues to be some debate over the extent that white supremacy drives Trump's decisions, hangups and obsessions. I learned this, to my chagrin, on Wednesday, when I tweeted out a link to a Think Progress piece by Ian Millhiser that debunked Jeff Sessions' claim that DACA is unconstitutional.

"Trump accusing Obama of overreach is always rooted in a belief Obama was never a rightful president," I mused, adding in a follow-up, "As with most things Trump, it really goes back to racism. The only reason to believe Obama was incompetent and illegitimate is racism."

While it might seem a bit odd to link a discussion of the constitutionality of an executive order to racist animosity toward Obama, I felt it was justified in this case. Both during the Sessions speech and while reading Millhiser's takedown, I was struck by how unnecessary it was for the Trump administration to challenge the constitutionality of DACA. The president has a lot of latitude to set priorities for immigration enforcement — which is the power that Obama invoked to justify DACA in the first place — so all Trump had to do was declare that he was rearranging immigration enforcement priorities. To declare Obama's actions illegal struck me as further evidence of Trump's endless obsession with delegitimizing Obama's presidency — an obsession that is rooted in Trump's racism.

Kevin Drum of Mother Jones took me to task both on Twitter and in a blog post titled, "Racism Is Not the Explanation for Everything Republicans Do," in which he argued that Republicans had taken an obstructionist attitude toward Obama as a political move, scolding, "it’s unwise to make [racism] the go-to explanation for everything."

"Race is a powerful political weapon. It should be used judiciously," he added at the end.

But no one is pinning all Republican behavior on racism. In truth, I made a far more narrow claim: that Trump's hatred of Obama, which is obsessive, reflects his inability to accept that a black man could have been a legitimate president. No one, certainly not this feminist, said all Republican behavior is about race. Not even all Trump behavior is about race — when he grabbed women's pussies, for instance, I suspect that was more about gender.

But when it comes to Trump, the time has come to stop ranking racism as last in the list of all possible motivations he has, and to accept that racism is the Orange Mussolini's prime directive. Particularly when it comes the way Trump is treating Obama's legacy.

"It is often said that Trump has no real ideology, which is not true — his ideology is white supremacy, in all its truculent and sanctimonious power," Ta-Nehisi Coates writes in a lengthy feature for the Atlantic. The piece is thousands of words long, but is worth taking the time to read (or the hour to listen to the audio version). Coates is painstakingly thorough with his research, covering history that is hundreds of years old, recent events and volumes of polling data to build a bulletproof case that the story of Donald Trump is the story of a man driven by white supremacy and elected because of it.

Despite the horrific topic, Coates' writing is a pleasure to read, if only because it's rare to get a chance to read such a deeply written piece in the fast-moving age of the internet. But it's also distressing that Coates had to do so much research, write so many words and use so much broad-ranging evidence to convince readers of what should be obvious: Donald Trump is a racist, and racism is the animating force behind his political success.

"As for his obsession with Obama, that’s most likely because Obama is his predecessor," Drum argues. "Trump’s personality demands that he attack his enemies relentlessly in order to build up his own ego, and in this case it means dismantling Obama’s legacy."

Except, of course, that Trump's obsession with delegitimizing Obama's legacy predates not just Trump's own presidency, but Trump's campaign and even his affiliation with the Republican Party. In the endless chaos of our news cycle, it's easy to forget, apparently, that Trump, a longtime political independent who often donated to Democrats, became fixated during Obama's first term on a conspiracy theory holding that Obama wasn't born in the United States and therefore couldn't be president.

Coates calls" birtherism," as this conspiracy theory is called, "that modern recasting of the old American precept that black people are not fit to be citizens of the country they built." And Trump hammered at it, repeatedly, in public until Obama, in a moment that should bring shame to us all, felt compelled to produce his birth certificate in an effort to stop the madness.

Even after that, as Coates recounts, "Trump demanded the president’s college grades (offering $5 million in exchange for them), insisting that Obama was not intelligent enough to have gone to an Ivy League school."

Trump has a long history of racism and a long history of floating eugenic theories, repeatedly insisting that he must be a genius because of his supposedly good genes. Trump is a stupid man who believes whiteness makes him smarter, and Obama's actual intelligence upends everything Trump thinks he knows about the world. This induced an obsession that happened to dovetail with the racist anger of a large proportion of white Americans.

That's the simplest explanation, but it also happens to be the one that fits the evidence. The insistence that it must be something else — some other explanation that has no real evidence behind it, but is more comforting than believing that the country is being run by a white supremacist — verges on denial. You'd think that after Trump lost his temper and defended swastika-waving white supremacists as "fine people," we could all accept our grim reality for what it is and start dealing with it honestly. And yet.