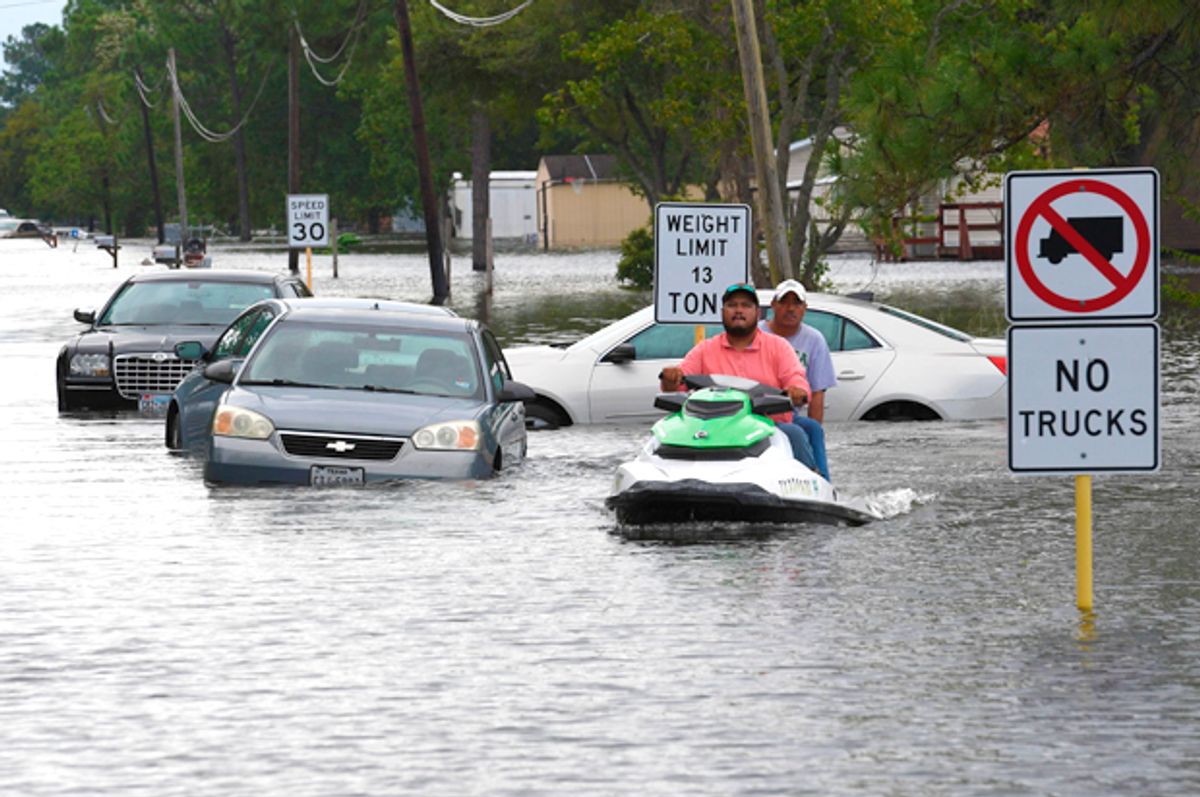 It’s been a time of calamities: Hurricanes Harvey and Irma, flooding in South Asia and Africa and a massive earthquake in Mexico have led to widespread devastation around the globe.

Some people seem to think this is divine retribution for the sins of humanity: Kirk Cameron, former child actor, said in a video on Facebook that Hurricane Harvey and Irma were “a spectacular display of God’s immense power” and were sent so human beings could repent. Earlier, after seeing the devastation of Hurricane Harvey, conservative Christian pastor John McTernan had noted that “God is systematically destroying America” out of anger over “the homosexual agenda.”

Others disagreed over the reasons for God’s anger, but not necessarily with the assumption that God can be wrathful. Jennifer Lawrence suggested that Irma was “mother nature’s rage and wrath” at America for electing Donald Trump.

It is true that many religious traditions, including Judaism and Christianity, have seen natural disasters as divine punishment. But, as a scholar of religion, I would argue that things aren’t that simple.

Some of the earliest narratives of divine retribution go back to 2000 B.C. The Sumerian Epic of Gilgamesh tells the story of a catastrophic flood.

The gods decide to bring rain down to end the “uproar” of humankind. But the god of the waters, Enki, warns the righteous man, Utnapishtim, about the impending disaster.

Utnapishtim saves himself and his family by constructing a boat.

Elements of this story are later echoed in the Hebrew Bible’s Book of Genesis. God is angry because the Earth is filled with violence caused by human beings and vows to “destroy both them and the Earth.”

Noah is a “blameless” man, and God tells him to build an ark that would be large enough to hold his family and “two of all living creatures.” Although humanity perishes in a deluge, Noah preserves life on Earth.

It might seem straightforward to say that natural disasters in the Bible are associated with God’s anger, but that means missing the complexity of the text.

In the Genesis account, after the waters subside, God makes a covenant with Noah:

“Never again will I destroy all living creatures.”

This promise not to destroy humankind is also referred to in the Book of Isaiah, the Israelite prophet and seer. In a vision, God says that just as he vowed to Noah that water “would never again cover the Earth,” so too he promises not “to be angry.”

The question of God’s anger is intimately connected to the problem of human suffering. After all, how can a loving God cause indiscriminate human misery?

We first need to look at how suffering is portrayed in the texts. For example, it is also in the Book of Isaiah that we find the story of the “Man of Sorrows” — a man who takes on the sufferings of others and is an image of piety.

While the Bible does speak of humans suffering because of their sins, some of the most moving passages speak about how innocent people suffer as well.

The Book of Job relates the story of a “blameless and upright man,” Job, whom Satan causes to experience all sorts of calamities. The suffering becomes so intense that Job wishes he had never been born. God then speaks from the heavens and explains to Job that God’s ways surpass human understanding.

The Hebrew Bible recognizes that people suffer often through no fault of their own. Most famously, Psalm 42 is an extended lament about suffering that nonetheless concludes by praising God.

The Hebrew Bible’s views on suffering cannot be encapsulated by a single message. Sometimes suffering is caused by God, sometimes by Satan and sometimes by other human beings. But sometimes the purpose behind suffering remains hidden.

The Christian tradition also provides diverse answers to the issue of suffering.

The New Testament does refer to the Genesis flood when talking about God punishing human beings. For example, Paul the Apostle observes that God brought the flood on “the ungodly” people of the world. Earthquakes are also mentioned as signs of the end of time in the Bible’s Book of Revelation.

But the Epistle of James, a letter in the New Testament often attributed to Jesus’ brother or stepbrother, says that God tests no one. In fact, those who endure trials are eventually rewarded. The early Christian philosopher Origen argued that through suffering we can understand our own weaknesses and dependence on God.

In these views, suffering is not punishment but something that draws human beings to closer God and to one another.

Moving to more contemporary reflections, philosopher Dewi Zephaniah Phillips argues that it is mistaken to attribute to God a human feeling like anger because God lies beyond human reality.

Believing that hurricanes, floods, and earthquakes are “God’s punishment” reduces the divine to human terms.

Some theologians totally reject the idea of suffering as divine retribution because such an act would be unworthy of a merciful God. From a Christian perspective, God also suffered by being crucified on the cross as Jesus Christ.

And so, as a Roman Catholic scholar, I would argue that God suffers with people in Texas and Florida — as well as with those in India, Nepal, Bangladesh, parts of Africa and Mexico.

In the words of German theologian Jurgen Moltmann,

This is an updated version of a piece originally published on Sept. 6, 2017.