When I was a kid, my dad worked for Playboy. Our family outings to the legendary club taught me a lot 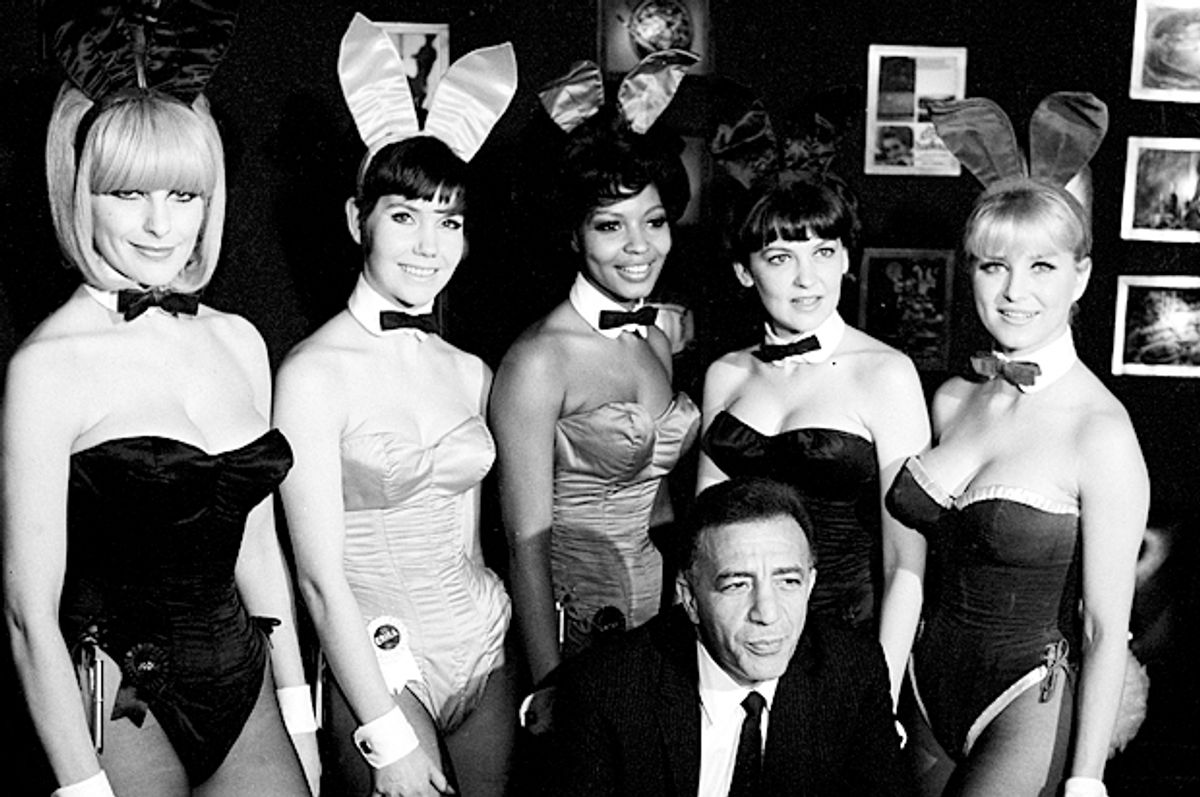 The Playboy Bunnies will once again take Manhattan when the legendary Playboy Club reopens its doors later this year near Times Square, more than three decades after the original went dark. All this bunny nostalgia brings me back to my childhood in Westport, Connecticut, when my father announced his new position as head of advertising for Playboy Magazine. At seven, I was too young to realize he'd just landed the ultimate male fantasy job. In my eyes, all the bunnies — Playboy, Energizer, Bugs — were still interchangeable.

Dad loved the glitzy perks: the Porsche 911, a country club membership, a fat expense account, the lifetime subscriptions to Playboy he gifted to friends. But those extras were child's play compared to the Holy Grail of girlie-magazine freebies bestowed upon him: a personalized, engraved VIP All Access Playboy Club Key.

He first took me, my sister and mom with him to the Playboy Club on East 59th Street off of 5th Avenue when I was nine. That made me the only fifth grader I knew who went behind those velvet ropes. I didn't give much thought to my mother's silence about our unorthodox family outings. It was something we just did. She was a demure, blue-eyed, blonde head-turner raised by Presbyterian farmers in Missouri. My Dad looked like a suntanned Tom Selleck mixed with Groucho Marx. He grew up in a Jewish neighborhood in Chicago where kids played softball in the street and everyone was an aunt, uncle or cousin. Mom could barely get out the birds and the bees speech. My father — well, he took his family to the Playboy Club.

Inside, we were greeted like this: "Good evening, I am your Bunny Suzy. May I see your Playboy Key, please?"

My dad pointed out celebrities to us and looked at the floppy-eared, bow-tied, silk bustier wearing bunnies in an "isn't this terrific?" kind of way. When my family walked up the spiral staircase to the fancy restaurant, I lagged behind, mesmerized by the champagne fizzing, ice clinking, cigarette smoking, and the laughter following the high-pitched squeals. Don Draper types sipped martinis while lighting their Lucky Strikes in the dimly lit corners.

I stared down those bunnies like nobody's business. I graded their techniques. There was the Bunny Stance: hips squared with one foot in front of the other. The Bunny Perch: resting a hip on a banister or chair. And the Bunny Dip: serving a drink while keeping a barely-there outfit in place. I imagined myself wearing those black stockings, sashaying in the stilettos, balancing a tray covered with cigarettes, snacks and booze.

Some of the bunnies wore expressions on their faces that suggested this is not so terrific, don't stare at me, don't even think about touching me. Those looks were not unlike the glares my mother gave my father. At that point, my parents were like long-distance acquaintances who hardly touched each other and spoke to each other only when they had to.

In Connecticut, my dad told us censored versions of his weekends at Hugh Hefner's Playboy Mansion — hanging out with models and swimming with movie stars like James Caan in the famed grotto. He brought us back loads of knickknacks, like Playboy golf clubs. Unlike my straight-A brainiac of a sister, who seemed to have a "take it or leave it" attitude, I yearned to be a cigar-cigarette girl or a cocktail waitress.

One night, before the plates were cleared from dinner, my dad dumped out a Santa Claus-sized sack of tchotchkes onto the kitchen table. I grabbed bunny-etched shot glasses, pens, coffee cups, decks of cards, fluffy bunny tails and ears, stickers; all of it stuff a burglar wouldn't steal.

I picked up a sweatshirt and hat. “Dad, can I wear these to school tomorrow?” I asked.

My sister flipped over a playing card, making a face that seemed to say this is just wrong. My mother was in the kitchen. She considered herself an admirer of Gloria Steinem — a "Bunny's Tale" exposé-reading feminist who named the family dog Ms.— but her résumé told the story of an American Airlines stewardess promoted to stay-at-home mom.

When I walked into my classroom the next day, some kids stared at me and whispered to each other. I asked my friends why everyone was acting so weird. Some of them pretended not to hear me. Others acted like they didn't hear the boy who said "it's definitely the Playboy Bunny."

“My sweatshirt has a bunny on it. So what.” I said, pointing to the ears. "It's not supposed to look real. It’s a logo. My dad works there. It’s cute."

I was an edgy young thing who loved the eye rolls and oh, really? responses from teachers and friends when they asked what my father did for a living. I thought the attaboy attitude my dad's buddies had toward him was pretty dang cool. I dropped the words Hef, full-frontal and centerfold in conversations. I slipped bunny ear stickers into Valentine's Day cards. I hippity-hopped along until I was 14 and my dad left Playboy. In an instant, I went from hot stuff to a has-been bore. Another product of a two-child, two-cars-in-the-garage Jewish couple living in Fairfield County who married too young and had nothing in common.

Because I was raised in a time and area where stay-at-home moms outnumbered their working counterparts, and because I believed that physical beauty was defined by what I saw in glossy magazines, I had convinced myself as an adult that a designer wardrobe and the exercise regime of a Navy SEAL were all I needed to make me worthy of being whisked away to a suburban marriage myself. And I believed that when the time came, I’d have the know-how to keep my man’s attention: I had studied the bunny techniques — their stances, their perches and dips — and made them my own.

It didn’t work out like that. At 40 and single, I started to hear the psychologists who connected my string of failed relationships to my childhood. Now I know Hef’s vision was a broken fantasy — even, or maybe especially, for those of us who bought into it when we were young.

Mary Beth Evens is a former TV producer and returning student at NYU, studying creative writing. She no longer has her faux bunny tails.