The dirt on "The Deuce," David Simon's next great HBO drama 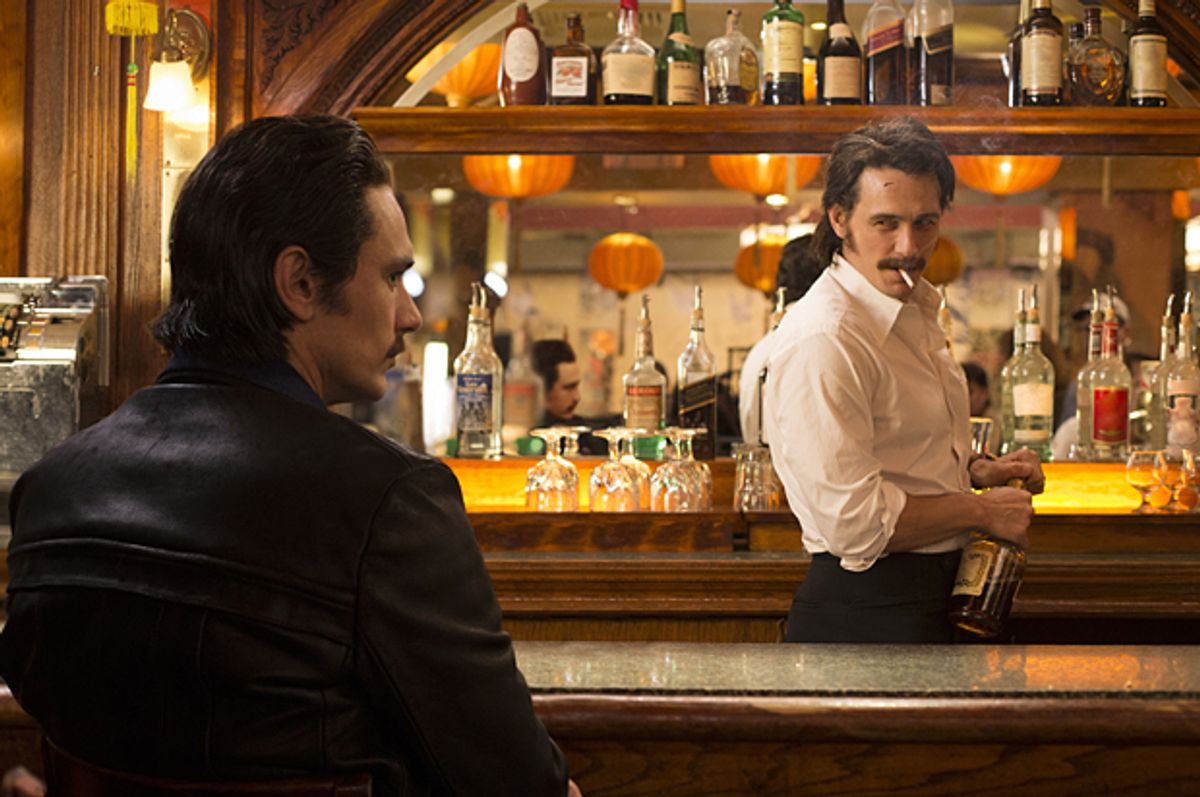 David Simon is a master of conveying all a person needs to know about a place or a person, in fleeting “this is how it is” transitions between primary storylines.

One such narrative wisp in HBO’s new drama “The Deuce” happens early in the series as James Franco’s Vincent Martino strolls past a working girl who is a fixture in the neighborhood where the bar he manages is located. Without breaking stride Vincent greets the woman, and she briefly turns her head to acknowledge him, interrupting the service she’s providing on her knees to a john.

HBO is no stranger to promoting exploitative depictions of sexuality in its programming, and certainly a slice of the audience may be fatigued at the prospect of being served yet another drama featuring women whose primary duty is sexual service. But this peek into unfiltered, gritty humanity in a scuzzy, dirty corner of America in some respects stands as a critique to the commodification of the female body and sexual exploitation. One may scoff that “The Deuce” is HBO’s way of having its cake and eating it too, except the cake legitimately is fascinating, fully-baked and still somewhat repulsive.

Few television creatives are as conscious about locking down the precise details of a place and an era as Simon. He and his writers excavate the dirt in the crannies of a setting, summoning up reasons as to why each particle matters with the stories of how it got into those cracks and the profiles of the men and women who pressed it into them. This devotion to the minute threads of his story’s weave steeps audiences in physical and emotional worlds they might otherwise never experience.

This is how we’re able to comprehend the calculating violence and corrupt politics that grew out of Baltimore drug trade in 2002’s “The Wire” and sense the sweat, struggle and flavor of post-Katrina New Orleans in 2010’s “Treme.”

So when I say that watching the eight episode season of “The Deuce” left me in awe of its performances, nauseated by the scuzziness of 1971 Times Square and grateful for the efficacy of antibiotics, that is a high compliment.

“The Deuce,” making its on-air premiere Sunday at 9 p.m., is named for the area of Manhattan’s 42nd Street that became synonymous with open criminal activity in the 1970s. Simon and co-creator George Pelecanos consciously evoke what the place was like by enveloping the imperfect men and women operating on that strip. Garbage is strewn all over the sidewalks and the streets, and under the cold lights of marquees, exhausted prostitutes and pimps wait for starved johns.

The litter on the streets as well as the dinginess and decay inside the buildings can be chalked up to an emphasis on realism as well as visual metaphor. This is an arena for people viewed as society’s throwaways: women who walk the pavement hawking sex, the men who make money off their flesh and even guys like Vince who hold straight jobs in a gutter of a locale.

What Simon and Pelecanos are seeking to do with “The Deuce” is similar in scope to the thick and sometimes gnarled narrative of “The Wire.” Viewing that series is not a prerequisite to enjoying “The Deuce,” but it may help to have a familiarity with that drama’s methodical, roaming style of storytelling. This means that every branch of the network associated with this trade receives close consideration, from the streetwalkers to the law enforcement that regularly rounds them up, to the mobsters who see a lucrative opportunity in absorbing the skin trade into their network of not-quite-legitimate businesses.

The question then becomes whether the subplots of characters who inhabit these storylines, many of which are barely connected for most of the season, will pay off in a way that’s satisfactory. This is where knowing Simon’s body of work helps. A crucial aspect of his structural style is to view the machinations of a tale from its foundation upward, carefully depicting how it operates and how its operators manipulate the rules for their own benefit.

“The Deuce” adds a level of emotional trickery to the mix, especially as it pertains to the muddled bond that exists between the prostitutes and their pimps as well as the beat cops who know these men and women by name. Each relationship is somewhat symbiotic in some respects and deeply oppressive in many others, and the writers never manipulate the plotting to evoke pity or anger where it isn’t warranted.

There are a lot of people with whom “The Deuce” invites the viewer to develop an intimacy, actually, which could make it challenging to fully enter this story even after viewing several episodes. But it’s a story expertly rendered not only by Simon and Pelecanos, but Richard Price (who wrote “The Night Of” as well as working on “The Wire”) and fellow novelists Megan Abbott and Lisa Lutz.  Adding balance to this view of a male-dominated world is direction from Michelle MacLaren, who set the scene by directing the premiere and the season one finale, as well as Roxann Dawson's and Uta Briesewitz's contributions behind the camera.

If their writing facilitates the realization of the minutiae of this place, the drama’s performances coax forth some understanding, if not empathy, for these beings moving through lives that can be unbearable in some moments. Franco is a headliner, and in addition to playing twins — Vincent and his incorrigible gambling addict of a brother Frankie — the actor also executive produces and directs two episodes.

His on-screen presence is remarkable, although Vincent’s complex development nearly renders Frankie’s existence unnecessary. The Martinos are based on actual twins who became fronts for the Gambino family, and who were discovered by producer Marc Henry Johnson during the research phase for the show. The primary tale follows Vinnie more closely than Frank, likely because only one brother was alive to provide his account, but also because Vinnie is a kind and somewhat principled upstanding presence in what is largely a moral cesspool.

Frankie’s relevance grows toward the end of the season, however, as he shapes up to be a more amoral counterweight to his hard-working brother.

Maggie Gyllenhaal provides the other arresting portrayal that makes “The Deuce” a fall TV necessity. As Candy, an independent woman who refuses to sign on with a pimp, Gyllenhaal exudes fiery determination and the grounded charisma of a woman who recognizes the importance of being in charge, especially when it’s her body that’s on the line.

As was the case with “The Wire,” “The Deuce” is fueled by too many outstanding performances to explore in one piece, among them being Lawrence Gilliard, Jr.’s portrayal of a sympathetic beat cop and Gary Carr’s flashy tactician of a pimp C.C. Emily Meade, Margarita Levieva and Chris Bauer are just a few actors doing outstanding work in this series, each playing characters worthy of close consideration.

Some of these characters may never meet, but their stories provide enough curious fodder to see how their actions, or inaction, affects each other’s lives. Simon and Pelecanos have strewn their paths with grit and shards to ensure we'll feel every slice and ache, and somehow knowing that all of it serves to heighten our enticement.