Need a distraction from politics? The top 10 sports plays of 2017 thus far will do the trick 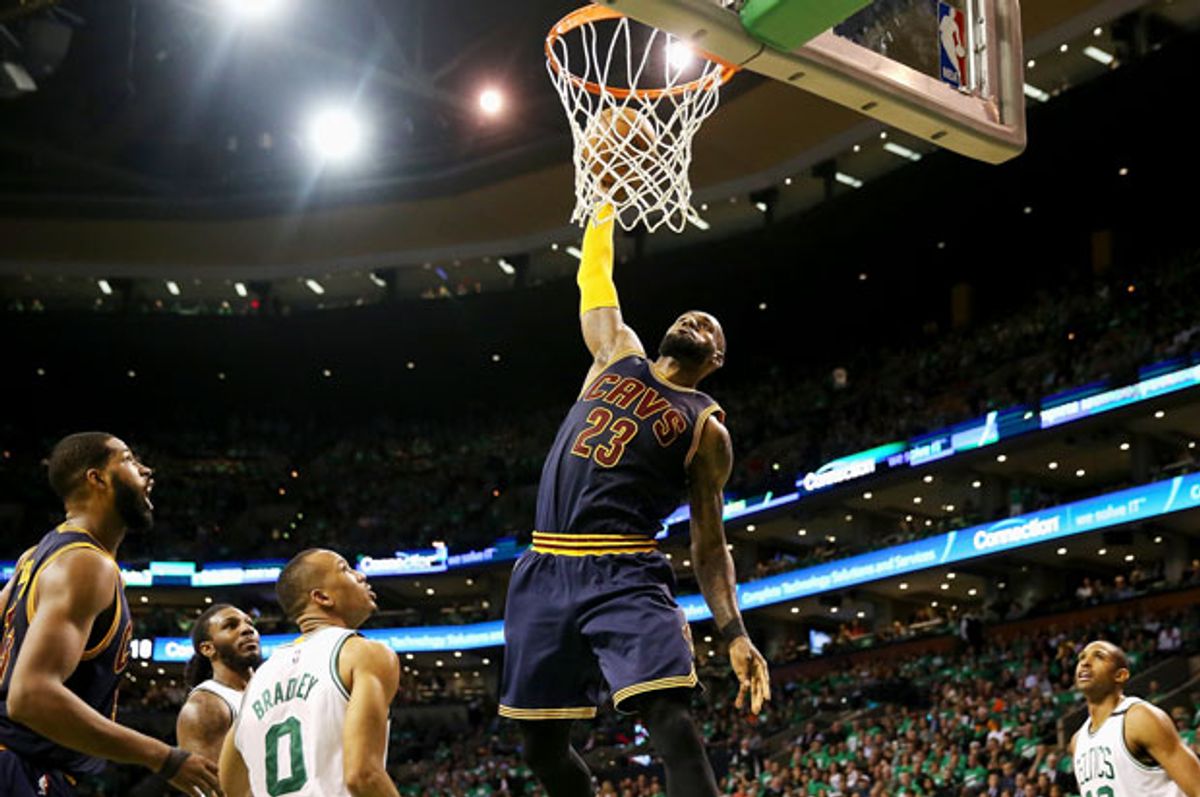 With the NFL season beginning this week, the sports action is about to ramp up in America. For months, sports fans could only rely upon baseball for their regular sports fix. But all that is about to change with football kicking off this Sunday.

Because the sports world will be turning its gaze onto the 2017-2018 NFL regular season (and we could all use a little break from the news cycle), now might be a good time to look back at all the great sports highlights that have occurred during the past eight months. From the New England Patriots' miraculous comeback in the Super Bowl to the exhilarating Stanley Cup Playoffs, 2017 has provided some fireworks that almost matched those in the political arena. Almost.

10. Josh Rosen TD pass, Sept. 3 (NCAA Football)
The fake spike in football is very rare. Pulling it off with less than a minute remaining to come back 38 points down and win the game is even rarer. In fact, what the UCLA Bruins did last week was one of the largest comebacks in college football history. With 48 seconds left, Josh Rosen, the outspoken yet heady quarterback for UCLA, threw a dart of a pass to wide receiver Jordan Lasley to seal — or, better yet, steal — the game.

9. Willie Cauley-Stein alley-oop, Feb. 8 (NBA)
The Sacramento Kings had a forgettable year, especially considering its franchise player, center DeMarcus Cousins, was traded midway through the season. Fortunately for the Kings, their replacement for Cousins, Willie Cauley-Stein, showed the hell up in 2017. This alley-oop dunk against the Boston Celtics only demonstrated his intoxicating talent. Stein had to reach back behind his head to corral the pass from teammate Rajon Rondo. Then the former Kentucky Wildcat standout followed it up with a devastating slam.

8. Connor McDavid goal, April 30 (NHL)
Connor McDavid got his first postseason experience this year, and the 20-year-old center made the most of it. The Edmonton Oiler scored a beauty of a goal against the Anaheim Ducks in game 3 of the Western Conference Second Round, solidifying a three-goal comeback for the Canadian-based squad. McDavid showed why he is one of the more promising talents in the NHL. He pivoted on a dime in Anaheim's end only to snipe a goal behind Anaheim goalie Josh Gibson. It was McDavid's third goal of the postseason, a hell of a showing for his team, which had just ended its 11-year playoff drought this past season.

7. Jaleel Scott TD catch, Aug. 31 (NCAA Football)
New Mexico State's Jaleel Scott climbed a ladder in his first game of the 2017 season to make a one-handed grab on the edge of the end zone. Sports fans immediately compared the catch to New York Giant Odell Beckham Jr's similar grab in 2015. While Scott's catch would not have counted in the NFL (receivers need to have both feet in bounds in professional football), it was definitely good enough for six points at the college level (only one foot needed in the NCAA). New Mexico State University does not usually field a top team in college football, but they can be proud that they produced one of the top highlights this year in sports.

6. Byron Buxton catch, Aug. 10 (MLB)
Minnesota Twin Byron Buxton is probably the fastest player in baseball. The guy ran around the bases this season in under 14 seconds for an inside-the-park home run — the fastest ever recorded (he broke his own previous record). Because of his speed, Buxton is the best center fielder in all of MLB. He showed why when he robbed Detroit Tiger Miguel Cabrera of an extra base hit. Buxton even misjudged the flight of the ball at first, but he made up ground and made the amazing catch.

5. Dom Dwyer goal, July 8 (FIFA)
The Men's U.S. National Team has not had a lot to smile about recently. The team has put itself in a hole for the World Cup Qualifier. But American soccer fans had to have been cheering with glee after this marvelous goal against Panama earlier this summer. While Dom Dwyer scored the goal, winger Kelyn Rowe put on a clinic to get away from the defense, allowing him to cross the ball to Dwyer. Dwyer showed some excellent touch to finish the job.

4. Gorkys Hernandez catch, Sept. 3 (MLB)
San Francisco Giant Gorkys Hernandez utterly robbed Tommy Pham of the St. Louis Cardinals this month. Pham hit a sure-thing home run in the top of the 1st, only for Hernandez to jump higher than the outfield fence to make the catch. No one at AT&T Park could believe Hernandez snatched it.

3. Mike Hoffman goal, April 18 (NHL)
The Ottawa Senators pulled off a Hail Mary pass in the beginning of one of its playoff games against the Boston Bruins. Erik Karlsson found Mike Hoffman all alone at the other end of the ice. Hoffman somehow brought down the pass before decking the Bruin goalie for a miraculous goal.

2. LeBron James dunk, June 9 (NBA)
The Cleveland Cavaliers came up short this season, losing in the NBA Finals to the Warriors. But no one could blame LeBron James for his team's failure to repeat a championship run. James did everything himself, including this pass off the backboard glass.

1. Julian Edelman catch, Feb. 5 (NFL)
The highest stakes in all of sports is arguably the Super Bowl. That's what made the New England Patriots comeback against the Atlanta Falcons all the more surreal. Wide receiver Julian Edelman somehow came down with this pass from quarterback Tom Brady, which ultimately allowed the Patriots to secure the win and a place in sports history.