We're a nation that likes its disasters out of the blue for maximum drama. I've learned it's better to ask for help 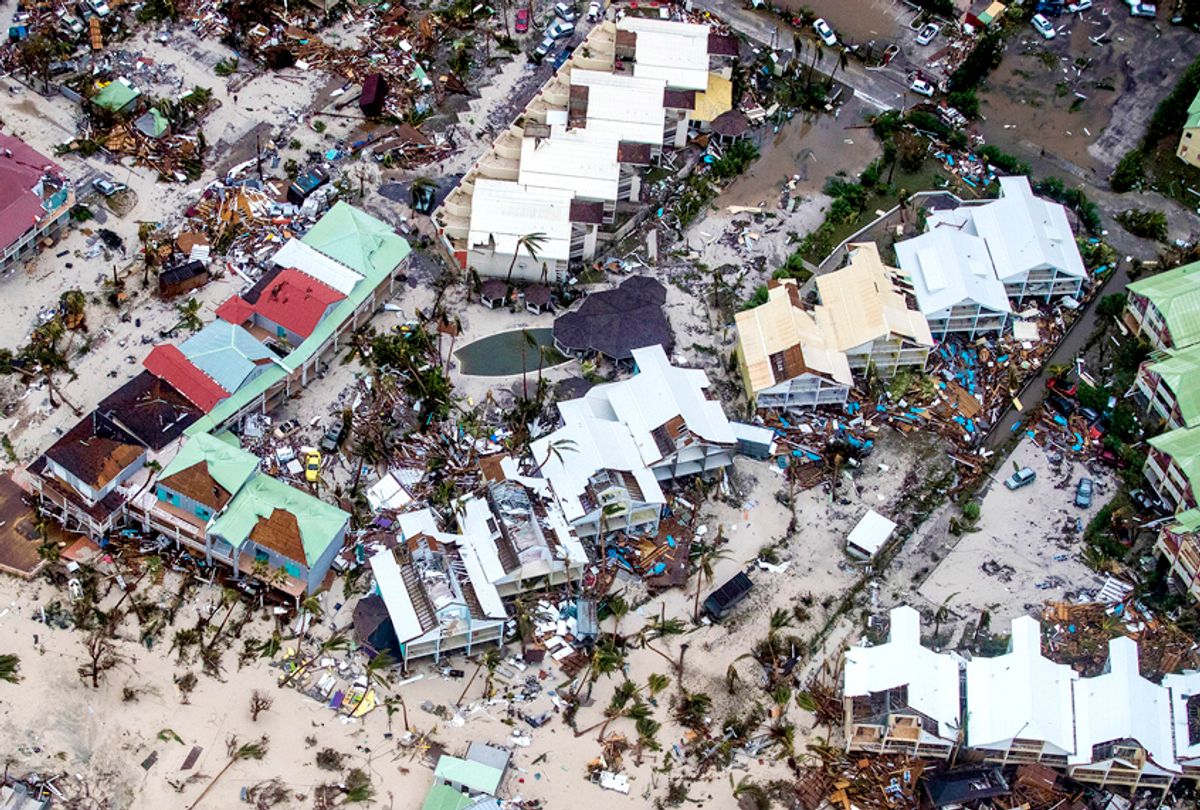 There comes a time in most of our lives when it’s necessary to ask for help. We have witnessed such a time most recently with Hurricanes Harvey and Irma, slamming into Texas, Louisiana, Florida and up the east coast over the couple of weeks leaving death and hundreds of billions in destruction in their wakes. The thing is, it’s usually the case that we don’t ask early enough.

You probably missed it, but another storm arrived just about this time last year. Hurricane Lucian was so small that it wasn’t covered on CNN or the other cable networks, and well-named as its eye had only one target and resulted in only one victim: me. There I was, sitting out here near the end of Long Island, already awash in depression before the storm arrived. I was nearing 70 years in age, I couldn’t find regular work as a writer, I was dismissive of the relationships in my life that were good for me and neglectful of those who actually loved me, and so lost in my own little fogbank of self-pity, fear and rage that I had arrived at the bottom of one gin bottle naturally reached for another for shelter as the storm bore down. The thing was, I had known for months that I needed help, and I knew someone who was well-prepared and ready to provide it, but of course I hadn’t asked. Denial isn’t an adequate word. It was more like an aggressively active repudiation of reason and a personal assertion of self-indulgence and arrogance that I mistook for independence. With a storm on the way, I was an island.

So the next morning, oblivious to the clouds on the horizon and the winds building in force around me, I set off to join my friends downtown for our regular morning coffee klatch, and upon hitting the street was knocked down by the hurricane I had seen coming but had done absolutely nothing about. Stone cold drunk at 10 in the morning, I fell flat on my face. The next thing I knew, like the victims of other, actual, far deadlier hurricanes, I found myself lying on my backside staring up into a very bright light surrounded by the kinds of people who are called upon to help in such cases: cops and ambulance drivers and EMT’s and doctors and nurses wielding IV drips and oxygen and the steadying hand of professionalism that’s always there, always available when the time comes, and so well-established by decades of legal regulations and tens of thousands if not millions of taxpayer dollars and the goodwill of volunteers and professionals alike that we take for granted the help they stand ready to give.

The best and most accurate way to describe what happened to me afterwards is to say that the system worked. Because there is a “system,” isn’t there? It’s the system we have created for ourselves through the establishment of our government to provide for all of us when the time comes that we need help. Not when we actually ask for it. I never asked for help, remember? But help is there when we need it. It’s not there because the free market in the form of some corporation took advantage of the opportunity to make a profit, or even found within itself the good will to provide help gratis in such an emergency. Help is there because collectively we have seen fit as a society to exercise mutually agreed upon moral principles, to organize them through a political system we have as citizens put into place, and to effectuate them with administrative bodies and federal, or state, or county, or town officials we have agreed to tax ourselves to pay in order to provide the help they are tasked with rendering. It sounds complicated, but it’s really very simple. We act collectively through the mechanism of our government in order to provide for the common good. And I’m here to tell you as a victim of Hurricane Lucian, we ignore the fact that government isn’t the problem but rather the solution at our personal and collective peril.

Like other storms before, and like Harvey and Irma after, my storm passed. I had damaged myself with gin and suffered a serious concussion and after initial medical treatment, began a process of reconstruction which is still ongoing today. Some of my recovery was covered by programs such as Medicare that we have taxed ourselves in order to pay for. I am a grateful beneficiary of the governmental largess we voted into place decades ago, and newly reminded of how necessary this help is when we need it. My continuing recovery has been aided by friends and the fellowship of volunteer organizations that benefit me as much if not more than the help I got from professionals. I’m a lucky, lucky guy.

The equivalent programs which are coming into play in the wake of Hurricanes Harvey and Irma are those administered by FEMA through its Disaster Relief Fund and National Flood Insurance Program; from HUD through Community Development Block Grants; the Small Business Administration’s disaster relief loans; even through the Army Corps of Engineers and the state administered but federally funded National Guard units that are aiding in storm rescue and recovery. FEMA alone estimates that as many as 500,000 citizens will file for disaster relief from Hurricane Harvey (equivalent estimates by FEMA for Irma are not yet available). It is anticipated that as much as $150 billion may be needed in federal relief from Harvey. The cost of damage relief for Hurricane Irma is valued at as much as $100 billion, and there may be losses as high as $200 billion more to the tourism trade and agriculture in Florida alone. Damage estimates for the storm in Caribbean islands are in the multi-billions as well, with the U.S. Virgin Islands of St. Thomas and St. Croix particularly hard hit and eligible for federal relief. Every story I’ve read on Harvey and Irma say that it will take communities years and years to recover. Some, like New Orleans after Katrina, may never recover fully.

But this isn’t just about the help available from the federal government after the storm. What about the kind of help I knew I needed before Hurricane Lucian but didn’t ask for? I’m sure glad the system was there to provide help to me after I had crashed and burned, but it was just plain fucking stupid of me not to have sought the help I needed beforehand. The same goes for the cities and states hit hard by Hurricanes Harvey and Irma. Federal “help” was there in the form of new Federal Risk Management Standards that would have mandated flood abatement for any new infrastructure funded by the federal government. But President Trump signed an executive order less than 10 days before Harvey hit reversing the planned Obama mandates, leaving flood prone areas like metropolitan Houston and most of low-lying Florida and other coastal areas without regulations on new construction. Just as plain fucking stupid as me, huh?

It’s even worse than that. Scientists have been warning for years that global warming is leading to warmer seas, stronger storms, larger and larger amounts of rain, and more and more coastal flooding. But do you think that the Republican governors and legislatures of vulnerable states like Texas, Florida, Georgia, and South Carolina — all of which just got inundated over the last two weeks — have paid the scientists any mind? Not on your life, or the lives of their citizens they haven’t. It’s pure madness, is what it is, the equivalent of living in an area that receives regular and sustained rainfall and deciding not to build a roof on your house. Why do something expensive like that? So the genius planners in Houston have contended over the years as they permitted willy-nilly development in the almost total absence of building codes and the actual absence of zoning laws. Why not let that dangerous, stinking goddamned chemical plant spew its pollutants into the air right next to grade schools and junior highs in the neighborhood next door? They decided to live there! They can move if they want! Freedom! And those roofs tacked onto wood frame houses with nail guns and no hurricane strapping? Hell yes! You want a roof on your house that turns into a nice airfoil in winds above 85 miles per hour, more power to you! Let those roofs fly! Freedom!

This country is going to have to come to grips with the before-and-after thing and do it sooner rather than later. This applies not just to storm-proofing communities in hurricane alley, but to a lot of other things as well, such as the opioid “crisis.” The current “solution” seems to involve throwing money at the “problem” in the form of treatment for addiction in the absence of dealing with the manufacture, distribution and prescribing of the actual drugs themselves. Which makes the same sense as our way of dealing with storms, even after being hammered successively by Hurricanes Rita ($24 billion), Wilma ($24 billion), Katrina ($160 billion), Ike ($35 billion), and now Harvey and Irma estimated to eventually cost more than $300 billion combined.

But, my god! We don’t want to hamper “economic development,” do we? Stand in the way of the almighty free market? What could you be talking about? Why, trying to tell the Republican legislatures of states like Texas and Florida and Louisiana and Georgia and South Carolina that they should make a few plans and pass a few laws mandating the functional equivalent of galoshes and umbrellas for homes and infrastructure lying in the paths of savage beasts like Harvey and Irma is a bit like trying to tell me that I should have poured out that bottle of gin instead of taking shelter inside of it when the storm hit. Truly scary to think that an entire political party in this country is just as plain fucking dumb as I am, isn’t it?