Sure, the hard right may wail — but Trump's cultists will follow him anywhere. Are Democrats walking into a trap? 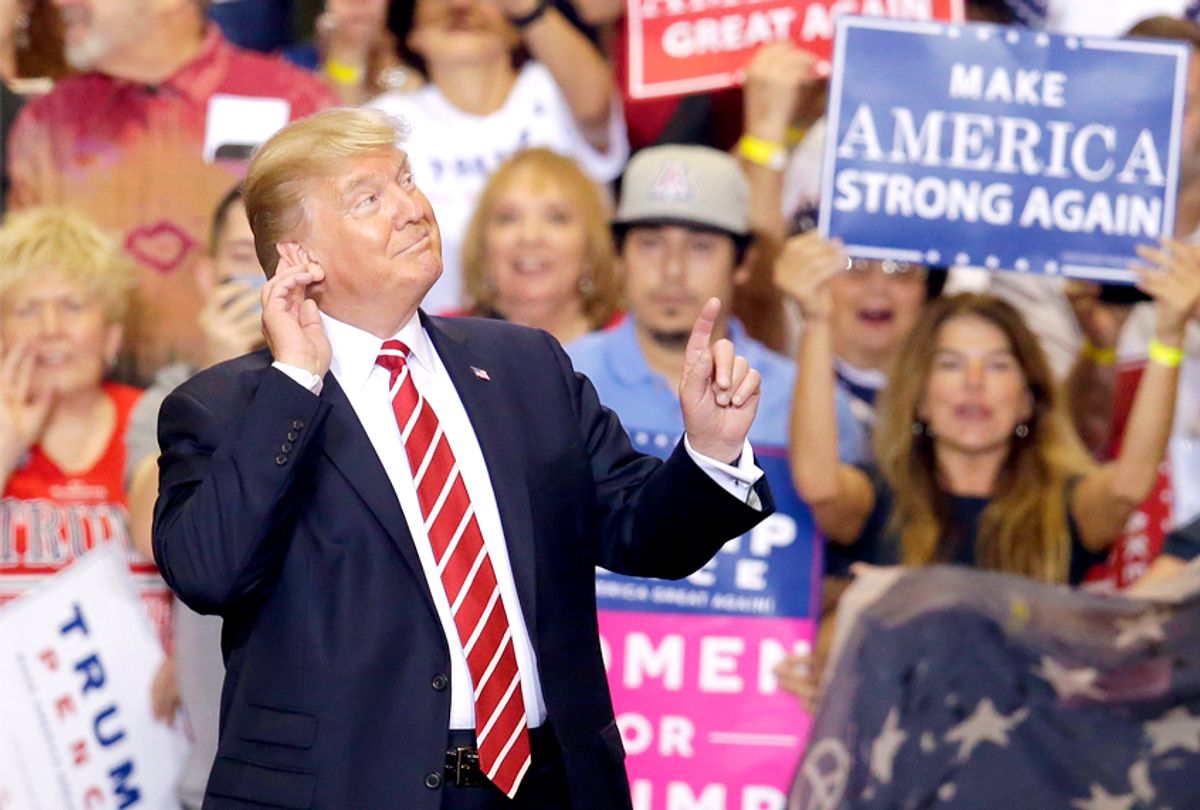 Over the weekend, the mainstream press published a flurry of articles about Donald Trump the pragmatic independent outsider who has no loyalty to any party and will work with anyone to Get Things Done. This excited reaction was in response to the president's agreement to raise the debt ceiling and fund disaster relief with the help of Democrats. But that's nothing compared to the delirium that broke out after he had dinner with Nancy Pelosi and Chuck Schumer on Wednesday night, and the Democrats announced that they had reached an agreement to legalize the Dreamers without funding his Big Beautiful Wall.

That would be a big win for the good guys, to be sure. Of course, when it comes to Trump, trusting him on a handshake has rarely turned out to be a wise decision for anyone, so we'll have to see.

Schumer's office responded to that by saying that Trump had not agreed to shelve the wall entirely but had agreed not to make it part of the DACA package. So as I write this, I'm not entirely sure what the agreement actually was.

When I wrote recently about Trump's decision to end the DACA program, I suggested that if Democrats had to agree to fund the wall in order to secure the future for the Dreamers, it would be worth it. They may not have to do that if the president is able to persuade Paul Ryan and Mitch McConnell to bring this deal to the floor, and if they can persuade enough Republicans to join with the Democrats to pass it as is.

On the other hand, this is an issue that is much tougher for the GOP to swallow, and one can assume it's going to be a battle. For all the hosannas from the Beltway press about Trump's "pivot" to the Democrats, the fact remains that the Democrats don't control Congress. And at this point, nobody knows how much clout Donald Trump still has with the Republicans.

The big question, of course -- the one that has everyone on the edge of their seats -- is whether this sort of "independence" will hurt him with his followers, the folks who chanted "build the wall" like a mantra during the campaign.

Breitbart's headline after Trump's latest Schumer-Pelosi meeting was "Amnesty Don: Trump caves on DACA." Rep. Steve King of Iowa, one of the original MAGA disciples, tweeted this when he heard the news:

That certainly sounds bad. But is it true? A new HuffPost/YouGov survey has some clues.

This poll was conducted after the debt ceiling and disaster aid deal -- and a majority of Trump voters said that if their leader agrees with the hated Pelosi, longtime villain of the right, then they do too, by an overwhelming margin of 69 percent to 14 percent. When Republicans were asked if this represented a "betrayal of the Republican Party or an effective act of bipartisanship," only 8 percent said it was betrayal.

Now, this question might result in a very different answer when it comes to DACA. After all, raising the debt ceiling is an abstract procedural issue and disaster relief was going to the great state of Texas and wasn't something Trump promised never to do. But this moment exposes once again just how empty conservative ideology really is.

The Republican base has been upset with the congressional leadership for a long time because it failed to crush Barack Obama and destroy his presidency. Now that GOP leaders are locking horns with President Trump, the man who dogged Obama for years about his birth certificate and then heroically defeated the loathed Hillary Clinton, the base despises them even more. According to Huff Post/YouGov, Republicans support Trump in a hypothetical disagreement with Ryan and McConnell by a 46-point margin. That rises to 62 points among Trump voters.

Where this all leads for the Republican Party is anyone's guess. But if I had to guess, I'd go with this instant reaction from Trump's bestie who wrote "Well @SenMajLdr GREAT JOB! You failed so miserably with Healthcare and 'excessive expectations' now @POTUS has to deal with Dem Leaders!" He thought better of that tweet and deleted it in favor of this:

On the other side of the aisle, Trump's hold on his base seems to be spooking some Democrats who, according to a Politico article on the resilience of  "Teflon Don," have conducted some polls and focus groups finding that white swing voters aren't bothered that Trump praises white supremacists (surprise!)  and don't much care about free college. So it's time to throw our aprons over our heads and run around in circles.

But when you look further at the data, swing voters are in fact very much in favor of electing a Democratic Congress to serve as a check on Trump. And the Democrats lead by a whopping 17 points on the question of "who fights for people like me?" Democrats lead by nine points in a generic partisan poll, which Nate Silver of FiveThirtyEight.com says should lead to a House majority, even with the gerrymandered GOP advantage.

And let's face facts: Donald Trump is historically unpopular. Midterm elections are almost always a referendum on the president, and he's not doing well at all, which makes these bipartisan lovefests more than a little troubling.

I understand that Democratic trolling could drive a wedge between Trump and his followers; from the sound of Breitbart's caterwauling, that may already be happening in some circles. But such a division hasn't happened yet on any mass scale, and it would be unwise to assume it will. Trump has been hemming and hawing about the Dreamers since he was inaugurated, and it hasn't budged his base. In fact, it may actually have helped him. The HuffPost/You Gov poll showed that 40 percent of Democrats were impressed with Trump's bipartisan outreach. It would be a bitter irony if Donald Trump, whose approval rating has been mired in the mid 30s, were to make gains with Democratic voters because he cut a deal to fix a crisis that he created by pretending he had a deadline that he could have ignored.

If you're wondering what Trump himself was tweeting after his momentous meeting with Democratic leaders, some things never change:

If anyone knows what his cult followers want to hear from their dear leader, he does.